Opinion: Why hiring a private biographer is the ultimate gift for the person who has it all 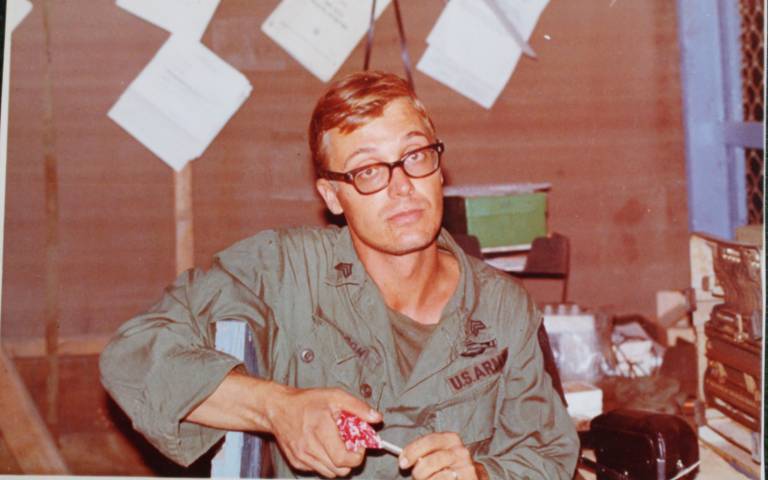 The Queen sits alone in her mask at the end of an empty pew in St George’s Chapel, Windsor Castle. It’s a deeply poignant image. Her solitude. And a symbol of her solidarity with us, her subjects. It’s been a strange and challenging year, for all of us. There’s a lot to reflect on.

For many of us, there is still a lot of life to live, too. Restrictions are easing, after all. We can meet with friends and family and create new memories, which––the Queen’s image reminds us––are to be cherished.

When my father-in-law passed away unexpectedly, his stories slipped away with him. We, as a family, were lucky: his music collection remains, as does a single shoebox jammed with letters written to his newlywed in an increasingly shaky hand as the Vietnam War dragged on.

What I wouldn’t give, though, to have the opportunity to sit down with him now, nursing a whisky, as he talks through his desert-island discs. He was an enigmatic soul, my father-in-law: modest, unassuming, kind. His memories slipped under the radar. That is a great sadness to me and a great loss to many.

And this was a big part of what motivated me to become a memoirist back in 2016. I am also a bibliophile. A collector. I struggle to throw things away. Stories, memoires, experiences. None of these should be lost or discarded. We should cherish them, enjoy them and return to them. To do so, though, we must first record them.

Gavin, still in his forties, works in finance. He hasn’t yet told his family that he has commissioned me to write his memoirs - he wants me to write new instalments every few years – but he was eager to prevent history repeating itself.

My grandfather suffered from Alzheimer’s, and apart from one lucid moment - when he recounted a tale of the middle name that I share - he barely spoke. I feared that, like my grandfather, by the time my children became interested in my life, I may not remember.

Liv is just 20. She is autistic. When she approached me, she wanted to write a book about the all-conquering neuro-diverse superhero taking on the contemptibly ignorant, viciously blinkered world. And winning. But, as we dug deeper into her day-to-day life, the nature of her book changed. As she says in her prologue:

"This probably isn’t the story the world wants to hear. It is my story, though. And perhaps, by allowing myself to be vulnerable and honest about the struggles I have, perhaps that is also strength. I’m starting to think so, anyway. And I think that, maybe, that is now the memoir I want to write. I warn you, though. It’s sometimes messy. And it’s never quiet."

Many of us might not have Gavin’s foresight to commission a memoir for ourselves. Most of us don’t consider ourselves as extraordinary as Liv. But, trust me on this, everybody deserves to be remembered. Nobody is boring. Even the most ordinary life has its extraordinary moments: a long-forgotten miscarriage, an unexpected dalliance, a military posting in Vietnam, a first kiss, a battle with cancer, a brush with the law, a stay at Her Majesty’s pleasure. And sometimes the most ordinary moments are extraordinary. They just need room to breathe.

Take Benny. It quickly became clear that Benny was less than comfortable with the process of a ghosted autobiography. “I don’t particularly want to talk about myself, Nick. I’m not on an ego trip. No, I just want my family to remember me as a good chap.”

Benny did not ask me to come and interview him, nor did he ask me to write his memoir. This was his family’s idea: an 80th birthday present for the hardest person on earth to buy for. Of course, Benny didn’t refer to this. He was far too intent on making me feel comfortable. “I’d rather them think of me as a decent bloke, and not blowing my trumpet. Not that I’ve got a trumpet to blow.”

I thought carefully about my response. “This is not about egotism,” I said. “In fact, this is quite the opposite. There is a generosity at play here; a generosity attached to sharing your experiences. The idea is that through this process - tortuous as it might at times seem - through talking to me and recollecting stories from your life, more of you is able to live on. Something that goes beyond simply ‘the good chap’; something that brings to life what it means to be a good chap.”

This was our first meeting of three; we chatted for just over six hours in total. Benny turned out to be a natural raconteur, with a mischievous sense of humour. Often, his wife joined us, and the two would relive old memories together. Sometimes the memories were sad: the long, long journey to conceive. Other times they were joyful: Benny’s inability to resist a croon. Often it was as if I wasn’t there.

For Benny, the memoirs were presented as a bound hardback volume in racing green buckram cloth. Every living member of the family, including grandchildren, was given a copy for Christmas. Benny’s was a relatively short edition of around 7,000 words and 15 photos. This was, according to his daughter, Benny’s one regret; “I know, now, my dad wishes he had added some more stories after realising how it would turn out.”

Some commissions can run to 50+ hours of conversation and 80,000 words, depending on the package selected, with bespoke cover designs; hand-sewn leather bindings; and an option for edited video and audio files. Just as every individual is unique, so too is the design of each book.

As a memoirist, my greatest privilege is the time spent listening to the stories of others. Sometimes we walk and talk – in the park, on the golf course or by the tennis court; sometimes we’ll have a drink or listen to music as we pore over old photos and journals, or musty boxes of who-knows-what. Other times we’ll chat over a puzzle or a crossword or a game of chess. One time I topped and tailed a seemingly endless bowl of runner beans. Another time, a client flew me out to the States to shadow them for a few days. The memoir might even be for a loved one who has already

Everyone is different. Everyone is unique. The listener must shift to hear what is spoken and what is unspoken. Just as the tone of the writing shifts to capture the subject’s voice, to preserve the idiosyncrasies in their personality and bring back to life their specific energy, my process is driven by the individual, not by the product.

The relationship between memoirist and subject is built upon trust. Sometimes a public figure wants a private memoir or family and friends choose to reflect on the life of an individual who has recently died. Sometimes, as with Liv, a change of focus might be required as the subject realises they want to write a different story.

Sometimes it might be a more practical flexibility, including more photographs, artwork or unique design elements, such as edited video footage or writing to a very tight deadline. There are numerous platforms out there which offer memoir-writing services, but I don’t know of any that offer the flexibility, the discretion and the attention to detail that I do.

I’m an academic, after all. Teaching and researching 20th-century literature in the English department at University College, London, for over 10 years; supervising dissertations at Magdalen College, Oxford. For my first book, Henry Green: Class, Style, and the Everyday (Oxford University Press, 2016), I spent a lot of time with archives. Now, it is a great joy for me to listen, to collaborate with living subjects. It is also a rare opportunity for the subject themselves: to talk, unhurried; to share stories, at leisure; and to be indulged to reminisce without restraint or judgement. Even if that subject chooses to reminisce about a lost loved one or partner, rather than themselves.

Whether it has been for a golden wedding or a retirement or a big birthday, clients have been rhapsodic about the experience of creating a memoir: “it’s the most special gift”; “the most meaningful”; “there is no better gift, in my opinion.” To tell someone you care for that their life is unique and wonderful, that you want to listen to their stories and preserve them forever. It means a lot.

We spend a great deal of time and money thinking about the possessions we leave behind, but no time at all on the stories. I find it interesting that many of us will happily commission a family portrait or pay for a service to organise our photos. That others might spend hours, days, years tracking their ancestry or even sit down and try to write an account of their lives.

But there seems to be a niggling reluctance to commission a professional writer to listen to your stories and craft them into prose for you, or your loved one. Why is that? Perhaps it doesn’t seem very British, somehow, to commission a memoir. Prince Philip might call it vulgar. It should all, somehow, happen more organically.

Except that it rarely does. And that is the issue.

This article was first published in The Telegraph on 25 April 2021.