Leading voices on democracy from UCL and the Hansard Society, along with other experts on the rule of law, are warning MPs just how far the House of Commons has become marginalised, one year on from its introduction of emergency procedures to operate during the pandemic. 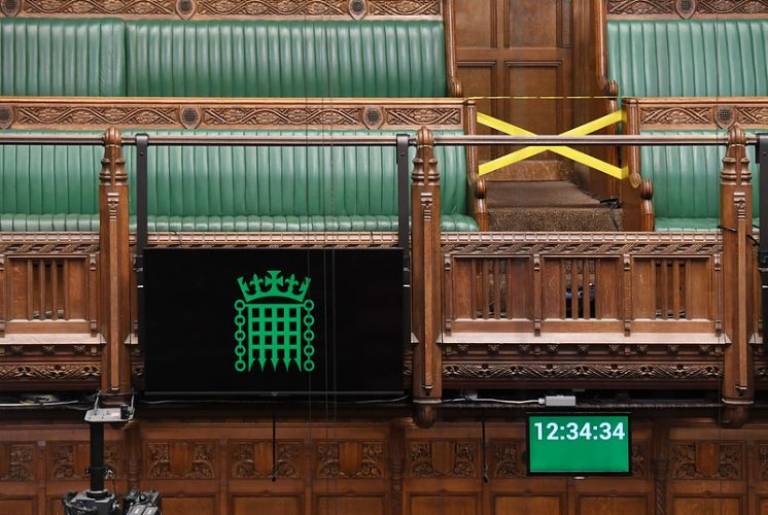 The UCL Constitution Unit, Hansard Society, Public Law Project and Bingham Centre for the Rule of Law are jointly highlighting how parliamentary accountability and control over decisions have diminished to a degree that would have been unthinkable before COVID-19. Individual MPs have also been shut out of participation, and the vast majority of Commons votes are now held by party whips.

While acknowledging the seriousness of the pandemic, the experts are encouraging MPs to challenge the extraordinary power Ministers now wield and to demand restoration of parliamentary control and proper scrutiny as an urgent priority.

UCL Constitution Unit Director Professor Meg Russell said: “The marginalisation of the House of Commons under COVID has been shocking. Parliament’s role must be restored urgently. Since March 2020, the public has lived under some of the UK’s most restrictive peacetime laws, and to support the economy public money has been spent on a vast scale. Yet parliamentary accountability for, and control over, these decisions has been dangerously diminished.

“In the early days of the pandemic, necessity arguably justified swift and drastic action. But a year on, there’s a real risk of damaging precedents being set. Some recent developments have accelerated negative trends that predate the pandemic. Unless MPs collectively take a stand against parliament’s continued marginalisation by ministers, what was once extraordinary risks becoming the norm.”

A briefing sent to MPs highlights five ways in which the government’s approach to the House of Commons has marginalised MPs and eroded parliamentary control citing:

The impact on the public of the use of Statutory Instruments (SIs), where government can impose restrictions without having to first seek parliamentary approval, is singled out for causing damage and confusion. Some SIs came into force an hour or less after being made, frequent errors needed to be corrected and a lack of Impact Assessments and discrepancies between the law and guidance compounded scrutiny problems for MPs and the public.

Dr Ronan Cormacain of the Bingham Centre for the Rule of Law said: “Although some Statutory Instruments (SIs) make relatively innocuous changes, others truly are draconian: shutting down businesses, forcing people to stay at home, imposing hotel quarantine or mandatory testing. Alongside this, the police have been given huge enforcement powers including fixed penalty fines of up to £10,000 and powers (under the international travel regulations) to enter private premises at any time of the day or night.”

On proxy votes, the briefing says few people outside Westminster realise just how few MPs are now even casting their own votes – and instead may need to choose how to vote before they’ve even heard the debate. This is despite the existence of a secure voting app, still operating in the Lords, whose operation was halted by ministers in the Commons. Party whips hold most of these proxy votes, with a single government whip responsible for casting 329 votes and an opposition whip for 173.

Dr Joe Tomlinson from the Public Law Project said: “An emergency on the scale of coronavirus can require that parliamentary scrutiny be temporarily sacrificed in exchange for broader accountability. Yet the government has failed to keep its side of the bargain. Too frequently, announcements have been made at press conferences, or briefed privately to the media, rather than presented for democratic scrutiny and questioning by MPs. Ministers have sought extraordinary powers while consistently excluding both the House of Commons as a whole, and certain MPs, from participating in proper oversight.”

Westminster has one of the weakest systems in the world for parliamentary influence and control over public spending. This has been greatly exacerbated by the pandemic with the House of Commons Library estimating that up to £469 billion could be spent in 2021-22 prior to parliamentary approval of departmental spending plans.

Dr Ruth Fox, Director of the Hansard Society, said: “Some difficulties during the pandemic have amplified problems at Westminster that had already been visible for years. Improvements in the scrutiny of delegated legislation and financial matters have long been called for.  Fundamentally, the extent to which the government controls the House of Commons agenda, and thereby its procedures, needs to be reduced. In exiting the current emergency, MPs’ decision-making powers in all of these areas badly need to be enhanced.”

The briefing for MPs is available to read in full on the UCL Constitution Unit's website here.