Professor Sir Roger Penrose, who was an undergraduate at UCL, is among three scientists to have been awarded the Nobel Prize in Physics for work relating to black holes. 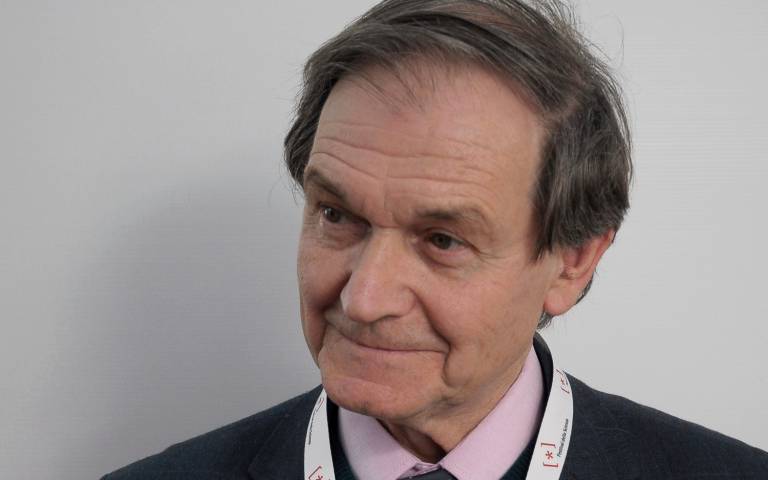 Sir Roger, an Emeritus Professor of Mathematics at the University of Oxford, was awarded the prize, the committee said, for his discovery that “black hole formation is a robust prediction of the general theory of relativity”. The other half of the prize went to Professors Reinhard Genzel and Andrea Ghez “for the discovery of a supermassive compact object at the centre of our galaxy”.

Sir Roger, born in 1931, graduated with a first-class Mathematics degree at UCL in 1952 before studying for his PhD at St John’s College, Cambridge. After a series of academic positions in the UK and the US, in 1973 he was appointed Rouse Ball Professor of Mathematics at the University of Oxford, becoming Emeritus Rouse Ball Professor of Mathematics 25 years later, in 1998. He was made an Honorary Fellow of UCL in 1975. He is UCL's 30th Nobel laureate.

In January 1965, ten years after Albert Einstein’s death, Sir Roger proved that black holes really could form and described them in detail – as singularities in which all the known laws of nature cease. (Einstein did not believe black holes really existed.) His groundbreaking article, according to the Nobel Committee for Physics, is still regarded as the most important contribution to the general theory of relativity since Einstein.

He is also well known for a number of popular physics books, including Emperor's New Mind: Concerning computers, minds, and the laws of physics and The Nature of Space and Time, a record of a debate between Penrose and Stephen Hawking.

The new Nobel Laureate gave a talk at UCL last year. Professor Jonathan Oppenheim (UCL Physics & Astronomy) said: "Roger's talk was an inspiration to students here, many of whom became interested in black holes by reading his popular physics books. He has always been very generous with his time, and we had a lot of fun arguing about his ideas on gravity and the role it might play in understanding some of the mysteries of quantum theory."

Professor Sougato Bose (UCL Physics & Astronomy), who organised the talk, said: “Roger is a highly inspiring personality. He was very happy to visit UCL for a (massively attended) talk in 2019, and noted fondly his time as a student at UCL. Besides his classic contributions in gravitational physics, he also has intriguing ideas on gravity causing the collapse of the wavefunction in quantum mechanics, which are now ripe for testing."

Professor Hiranya Peiris (UCL Physics & Astronomy) said: "Professor Penrose’s foundational theoretical insights into black holes inspired extensive observational programmes to study black holes in nature - in particular, Professors Genzel and Ghez share the prize for exquisite measurements of the frenetic motions of stars at the centre of the Milky Way galaxy, revealing the properties of the invisible object at its heart.

"Professor Penrose’s mathematical breakthroughs coupled with the tremendous technological innovations required to make these observations has given us the most convincing evidence yet of a supermassive black hole at the centre of our galaxy."

David Haviland, chair of the Nobel Committee for Physics, said: “The discoveries of this year’s laureates have broken new ground in the study of compact and supermassive objects. But these exotic objects still pose many questions that beg for answers and motivate future research. Not only questions about their inner structure, but also questions about how to test our theory of gravity under the extreme conditions in the immediate vicinity of a black hole.”