Congratulations to members of UCL’s community who have been recognised in the Queen’s Birthday Honours 2020. 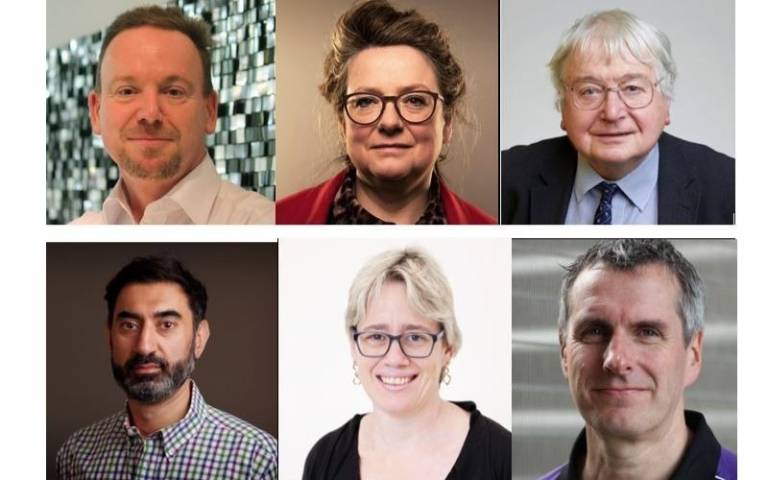 Seven current UCL staff and a host of UCL alumni were commended for their services to academia, higher education, science, the economy and creative industries.

In the annual awards lists, delayed this year due to the pandemic, two UCL scientists were honoured for their work in relation to Covid-19.

Sir Richard, a Professor of Material Catalytic and Computational Chemistry, has worked in the field of computational and experimental studies of complex inorganic materials for more than 40 years. He has been associated with UCL since 1976, was Head of UCL Chemistry from 2002 - 2007, UCL Dean of Mathematical & Physical Sciences from 2007-14 and is currently a Research Professor in UCL Chemistry.

Alongside his academic contributions, Sir Richard was elected a Fellow of the Royal Society in 2004, where he currently holds the role of Foreign Secretary.

On receiving his Knighthood he said: "I am naturally very pleased to have been awarded this honour, both personally and for the recognition with it gives to the key role of science and research. I am also grateful for the support I have had from so many UCL colleagues over the years."

Sir Geoff, a Professor of Collective Intelligence, Public Policy and Social Innovation, was previously Chief executive of NESTA, an innovation foundation, from 2011 to 2019 and has held various UK Government roles and founded the think-tank Demos.

He said: “I’ve been lucky enough to work across quite a few domains – from the creative economy to public policy, social innovation to technology – which are reflected both in this honour and in my role at UCL. At UCL/STEaPP I’m now working with fantastic colleagues to advance how we both understand and act on some of our most pressing complex problems. Watch this space!”

She said: "I am delighted and honoured by this, and I'm really grateful to all my colleagues and collaborators over the years, at UCL and beyond, who have made working in cognitive neuroscience such a pleasure and a joy. My only sadness is that my dad has passed away, as he would have been thrilled and he would definitely have made me wear the medal all the time."

She said: "It has been a privilege to be the Academic Lead and Chief Investigator for the UK’s national surveillance study, the COVID-19 Infection Survey (usually called the “ONS Survey” in the press!), which would have been impossible without everything I have learnt from the many talented and committed members of the MRC Clinical Trials Unit at UCL over the last 25 years. This award reflects their contribution, as well as that of many working tirelessly at the Office for National Statistics, IQVIA, the University of Oxford and the Lighthouse Laboratories, to deliver the study."

Professor Sally Grantham-McGregor (UCL GOS Institute of Child Health), Emeritus Professor of Child Health and Nutrition, was made an OBE for services to Early Childhood Development in Developing Countries.

“It is so nice to be recognised this way. It gives me a chance to thank countless others who have helped me in life, by teaching me, working with me, pushing me to do better, setting examples on how economics can be used for good, and inspiring me through their curiosity,” he said.

Professor Tim Baker (UCL Mechanical Engineering) received an MBE for services to Healthcare in the UK and Abroad during Covid-19. Professor Baker was the engineering co-lead for the UCL Ventura project that developed the Continuous Positive Airway Pressure (CPAP), which has been used extensively to help COVID-19 patients with serious respiratory problems to breathe more easily.

He said: “It has been an absolute privilege to lead an incredible team of engineers and doctors from UCL in partnership with industry. What we achieved as a team is a result of everyone’s determination and commitment at a time of unprecedented need. The device was approved for use in only 10 days and 10,000 were delivered within four weeks. Thanks to everyone's hard work, patients across the NHS and around the world are being treated with the UCL-Ventura breathing aid. I am proud to have worked alongside staff from the NHS in the response to Covid, and I am honoured to represent the entire team in receiving this award.”

Polly Stenham – MBE for services to Theatre and Literature