Despite being championed by a host of celebrity chefs, crayfish ‘trapping’ is not helping to control invasive American signal crayfish, according to new research by UCL and King’s College London. 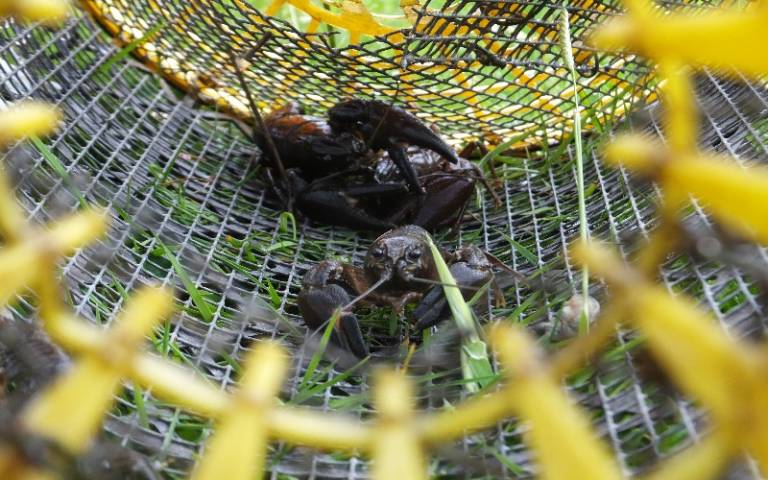 There have been grave concerns within the science community and amongst conservationists that American signal crayfish are wiping out other species of crayfish across Europe - including Britain’s only native crayfish, the endangered white-clawed crayfish.

In their new study, published in the Journal of Applied Ecology, the researchers find that trapping is ineffective in determining and controlling signal crayfish numbers, as the vast majority of individuals are too small to catch using standard baited traps.

‘Trapping to eat’ American signal crayfish has been promoted as a potential control measure in recent decades, but scientists warn that this method may exacerbate the problem, as it inadvertently incentivises members of the public to spread the species to new habitats and greatly increases the risk of accidental catches of the strictly protected native species.

Co-author and PhD researcher, Eleri Pritchard (UCL Geography), said: “Invasive signal crayfish from the US were introduced to England in the 1970s. Since then they have spread rapidly, displacing native crayfish, impacting fish and damaging ecosystems.”

“While celebrity chefs and conservation charities have, with good intentions, promoted trapping and foraging as a way to control American signal crayfish, our research shows trapping to be ineffective. We are also concerned that trapping risks spreading the fungal pathogen, called crayfish plague, which is lethal to native European crayfish.”

The study took place in an upland stream in North Yorkshire, UK and compared the effectiveness of three methods used for surveying population numbers: baited funnel trapping, handsearching, and a novel ‘triple drawdown technique’, which involves draining a short section of stream in a carefully controlled way and calculating the number of crayfish present, including infants.

To measure effectiveness, scientists compared all methods for determining population size, and for understanding the prevalence of crayfish invasion and the ecological impact.

The triple drawdown method also showed that most of the crayfish caught were tiny (smaller than a 1 pence piece), with only 2.3% of the population large enough to be caught in standard traps. Crucially, signal crayfish can become sexually mature before reaching a ‘trappable’ size, allowing populations to reproduce despite best efforts to control them through trapping.

Co-author and recognised UK crayfish expert, Paul Bradley (PBA Ecology), said: “We now have strong data to show that trapping does not help to control invasive crayfish.  On the contrary, there is growing evidence that trapping furthers the spread.

“In the short-term, conservation efforts should re-focus on promotion of aquatic biosecurity, and in the longer-term we need further research to better understand the invasion biology of American signal crayfish. This will help to inform more effective and sustainable approaches to the management and control of this problematic invasive species”.

The scientists strongly recommend that recreational crayfish trapping be curtailed to prevent the further spread of these invasive species. They believe more focus should be placed on initiatives like the UK’s national ‘Check Clean Dry’ campaign, aimed at educating regular water users on the way that non-native invasive aquatic plants and animals can unwittingly be transported between waterbodies on contaminated clothes and equipment, as well as by fish stocking and water transfer schemes.

“These findings present a new chapter in management practices, providing invaluable intelligence for fisheries and angling clubs, supporting them in refining practical solutions to controlling this highly aggressive species.”

The research was carried out with PBA Applied Ecology and funded by the Natural Environment Research Council through the London NERC DTP.