City dwellers just as willing to help a stranger

People in cities are just as likely to help a stranger on the street as those in towns and villages, finds a study by UCL researchers. 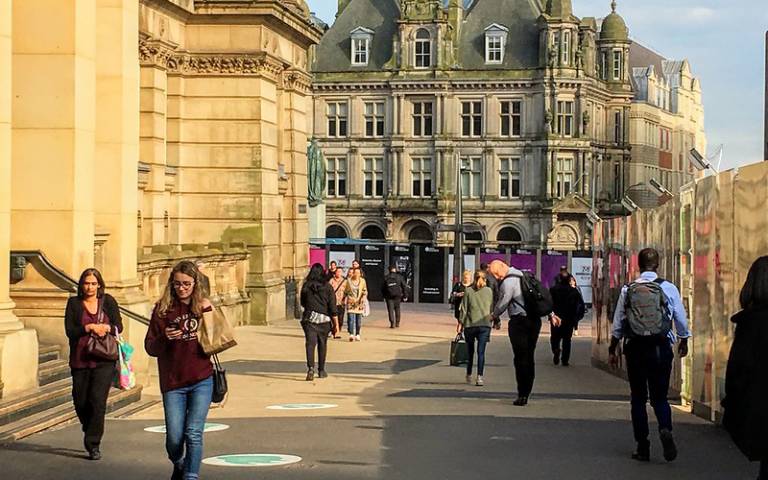 Helping behaviour was higher in more affluent areas, as social deprivation predicted lower levels of helping, according to the results of the UK-based study published in Proceedings of the Royal Society B.

Lead author Professor Nichola Raihani (UCL Psychology & Language Sciences) said: “We wanted to see whether commonly-held beliefs that people are less friendly in cities are true, as past studies have shown mixed results.

“We found that people are just as willing to help a stranger in a city; instead, socio-economic factors predicted whether people would help strangers, and may have been the underlying reason for prior evidence about less friendly urbanites.”

The researchers were seeking to understand social behaviours in different environments, as some studies suggest city living may be linked to lower trust, greater stress responses and increased risk of some mental illnesses.

First author Dr Elena Zwirner (UCL Genetics & Environment and UCL Psychology & Language Sciences) said: “There is a widespread believe that city-dwellers are more selfish than town-dwellers. This view is based on the evidence that cities are extremely hyper-stimulating environments, and that living in such environments leads to high levels of social stress and anxiety.”

The study was conducted in 12 cities (over 100,000 inhabitants) and 12 towns and villages (fewer than 20,000 residents, with consistently lower population densities) across the UK. In the cities and in one of the towns, the research team conducted the experiments in two separate neighbourhoods: one higher-wealth and one lower-wealth.

For the experiments, Dr Zwirner went to different neighbourhoods and directly or indirectly sought help from strangers. She dropped items to see if people would help her pick them up (some of the time she asked a stranger for help while picking up the items), she waited at the side of the road to see if drivers would stop for her, and she left stamped letters on the pavement to see if people would post them.

On average, people helped 47% of the time (643 out of 1,367). The researchers found no differences between cities and smaller towns in the likelihood that people would help a stranger. Instead, people in more deprived neighbourhoods and towns were around two times less likely to help.

Professor Raihani said: “There are many reasons why deprivation may be associated with lower rates of helping strangers. For one, it is easier to help when you have more to give; people with less material advantage and security might trust strangers less and prefer to help only those already known to them. Some evidence has shown that exposure to adversity and low socioeconomic status predicts increased help towards family and friends, for example.

“We also cannot rule out that the neighbourhood environment may influence how people behaved in the experiments, rather than the deprivation experienced by people themselves.”

The study was supported by the British Academy and Leverhulme Trust.