UCL experts provide leading analysis around the US election

UCL academics have been providing critical commentary and expert analysis on the 2020 US elections, with regular appearances in UK, US, and international media outlets discussing one of the most hotly-contested races in American history. 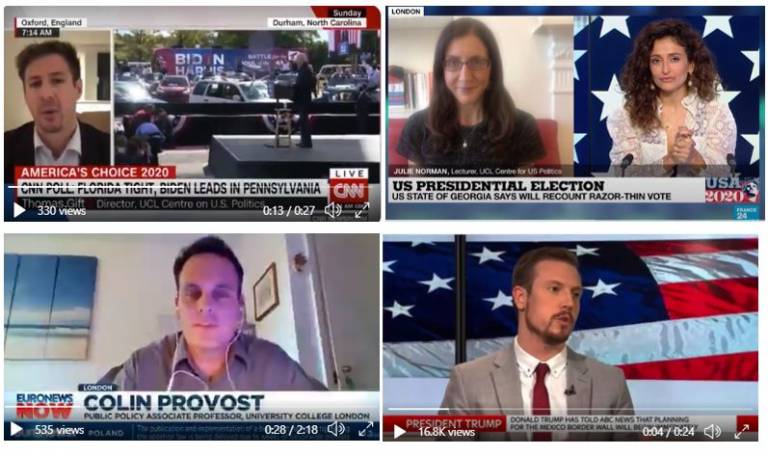 As the world has looked on at President Donald Trump and Former Vice President Joe Biden battling for the White House, UCL’s newly launched Centre on US Politics (CUSP)—housed within UCL's School of Public Policy—has been at the forefront of commentary, with scholars providing incisive analysis of US politics and its implications for an international audience.

Dr Thomas Gift, founding Director of CUSP, said: “2020 has been one of the most fraught and high-stakes elections in US history. As a Centre, we want to pioneer an outward-looking approach to understanding the structures, influence, and reach of contemporary American politics, providing a diversity of perspectives and informing a global view on US politics.”

@CUSP_ucl scholars delve into pressing questions about US politics through research, writing, and public commentary.

In addition to appearing regularly on CNN, BBC, CNBC, and other leading outlets throughout the election season, Gift provided 10 hours of “around-the-clock” coverage for the BBC World Service as part of its election night “America Decides” programming.

On Bloomberg TV, legendary news anchor Tom Keene referred to the work of CUSP’s scholars as part of “a wonderful industry in the United Kingdom [...] providing US wisdom off the platforms of the great schools of the United Kingdom.”

From October and running through January, CUSP is hosting a series of events, sponsored by the US Embassy in London, under the theme "Decision 2020: Interpreting the US Elections". The events are free and open to the public. The goal is to encourage a greater understanding of the US electoral process, as well as to engage policymakers, academics, thought-leaders, the media, students, and practitioners in a nonpartisan, informed, well-rounded discussion of the topic.

As part of the series, CUSP will jointly host events with the US and Americas Programme at Chatham House and the Senator George J. Mitchell Institute for Global Peace, Security and Justice at Queen’s University Belfast. Panelists include top academics from universities such as Harvard, Stanford, and Duke, as well as journalists from outlets including the New York Times and the Wall Street Journal.

CUSP brings together a range of UCL experts shaping salient conversations about US politics in the UK, in the US, and around the world. Scholars include CUSP founding Director, Dr Thomas Gift; Dr Brian Klaas, a UCL political scientist and columnist for the Washington Post; and Dr Julie Norman, a UCL foreign policy expert and a frequent contributor on US politics to the BBC and CNN.

Since the Centre’s launch in August, CUSP scholars have given approximately 250 interviews for leading media outlets on US politics and the elections and written for well-known venues like the Washington Post, Newsweek, and The Hill. For featured commentary, please visit CUSP’s Twitter page @CUSP_UCL.