One of UCL’s highest honours has been awarded to former Vice-Provost (Advancement) Lori Houlihan, who retired from UCL due to ill-health earlier this year. 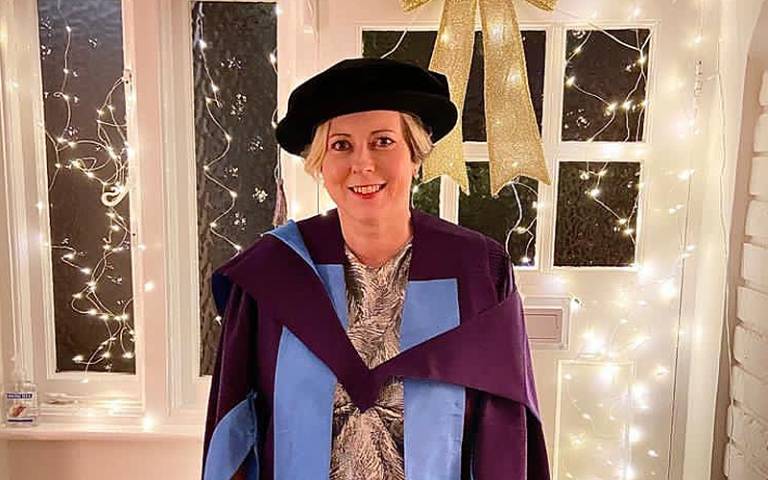 The award of an honorary doctorate recognises her “exceptional and dedicated service” to UCL over nearly 10 years, during which she has established the university as one of the world’s most creative, ambitious and successful institutions for philanthropy and engagement.

In awarding this honour, UCL also paid tribute to her wider contribution to the international advancement profession, to which she has given sustained time, energy and insight, in particular through the Council for the Support and Advancement of Education (CASE), for which she has acted as a key ambassador and senior volunteer.

Lori joined UCL in January 2011 to lead what was then known as the Development and Alumni Relations Office, which became the Office of the Vice-Provost (Development) in 2016 when she was promoted to Vice-Provost. In 2018 her portfolio expanded to include Communications and Marketing and UCL’s London Strategy, and she became Vice-Provost (Advancement).

One of her crowning achievements at UCL has been devising and leading the It’s All Academic Campaign, which launched publicly in September 2016 with targets of £600m and 250,000 volunteering hours, making it one of the biggest campaigns undertaken by a European university. The Campaign hit its targets this year, one year ahead of schedule.

As well as leading UCL’s philanthropy and engagement activities, she has also been a proactive champion of equity and inclusion as a member of UCL’s LGBTQ+ Advisory Group and Friend of Out@UCL, and as UCL’s first Interfaith Champion, a role she established to improve understanding and awareness of faith on campus. She has also used her profile as a senior woman leader to support the career development of other women at UCL and beyond, giving substantial time to mentoring women seeking to move into leadership roles and acting as a board member of the Higher Education Working Group of the 30% Club, which aims to increase gender diversity at board and senior level management.

Throughout her career, she has been an advocate of transparent and ethical fundraising practices, working collaboratively with regulatory bodies, including as a member of the standards committee of the fundraising regulator. In recognition of her outstanding contributions to university advancement, she was award the CASE Europe Distinguished Service Award in 2019.

After being diagnosed with brain cancer in 2019, she established the UCL Lori Houlihan Glioblastoma Fund to raise funding for UCL’s innovative clinical research into this type of cancer, which has raised nearly £160,000 so far.

“Lori has given exceptional service to UCL over nearly a decade and, despite retiring due to ill-health, continues to go above and beyond in supporting us and sharing her wisdom and experience, for which we are all incredibly grateful. Her energy and ambition has super-charged UCL’s philanthropy and engagement work, and she has also shaped the university more widely, through her championing of the place of faith, her proactive support of our LGBTQ+ network, the mentoring she has offered to colleagues at all stages of their careers, and a whole raft of other activities. This is a well-deserved honour and a reflection of the enormous esteem she is held in at UCL and across the wider sector.”

“This is such an unexpected honour and it means so much to receive it from UCL, where I have spent some of the most exciting and fulfilling years of my career. I’ve benefited hugely from the enthusiastic collaboration of colleagues here as well as friends, supporters and peers in the wider community, and everything we have achieved has been because we have done it together. As we celebrate the success of UCL’s It’s All Academic Campaign, I want to thank everyone who has made philanthropy and engagement at UCL so far-reaching, so impactful, and so much fun.”