Opinion: Coronavirus may be increasing risk of stroke

Across the world doctors are reporting COVID-19 patients developing dangerous blood clots. Here Professor David Werring and Associate Professor Arvind Chandratheva (UCL Queen Square Institute of Neurology) describe similar findings in those patients who went on to have a stroke. 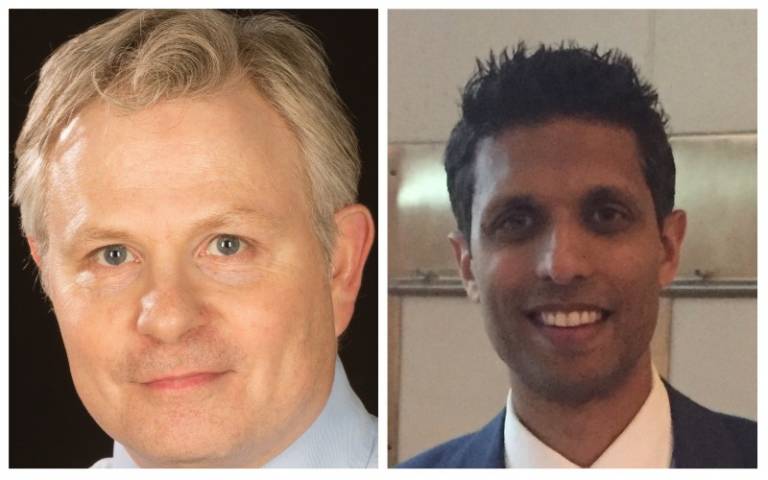 Just as Arvind was heading home after a long day as the consultant on call, his phone began to ring. It was a patient with a suspected stroke. Most other days it would be the registrar (junior doctor) first on the scene, but in the midst of the COVID crisis something – a gut instinct – told Arvind to stick around to see this patient.

A blue-light ambulance transfer was organised and just minutes later a man – let’s call him John – was being pushed out of the ambulance, staring at his mobile phone as if it were an alien object.

“Can I help you call your family?” Arvind asked.

John looked at Arvind, bewildered and frustrated, as the words he wanted to say would not come out.

The lack of oxygen to part of his brain prevented him from understanding how to use his phone. He couldn’t remember his passcode, coordinate his hand movements, or even communicate his basic needs. He didn’t even seem to be aware of what Arvind was asking him.

John was a previously fit and very active man who spoke six languages. Within seconds his world disintegrated, as the simplest tasks became impossible.

How, and why, had this happened? What had occurred was an acute stroke, among the most potentially devastating brain disorders, and the most common cause of neurological disability in the UK. From the brain scan, we could tell that this one was due to a blood clot preventing the vital supply of blood to critical areas of the brain (called an ischaemic stroke).

How much damage occurs depends on the area of the brain, the cause of the clot and, most importantly, how quickly the patient is treated to restore blood flow. Without treatment, 1.9 million neurons are damaged every minute after stroke symptoms begin.

In our hospitals, The National Hospital for Neurology and Neurosurgery and University College Hospital, we see about 1,000 people with stroke every year. Our stroke unit has smooth-running protocols to give clot-busting drugs, remove clots mechanically using a suction retrieval device, and to prevent common complications such as chest infections. But John was different. As a keen swimmer and non-smoker who took no medicines, he was extremely healthy. The absence of risk factors for stroke was a medical red flag, alerting us that something was very out of the ordinary.

Exploring his recent history, we found that he had been in hospital for severe respiratory illness – diagnosed as COVID-19 – that required intensive care treatment. But he was recovering well. He no longer needed breathing support and he’d been moved a general ward. He should have been planning his return home. Instead, he had unexpectedly suffered a sequence of deadly blood clots in the lung (pulmonary embolism), in the legs (deep vein thrombosis) and now the brain, causing a stroke.

It puzzled us why a fit and healthy man had experienced so many blood clots in rapid succession, despite blood-thinning treatment. But in just two weeks in April 2020, our team saw six people with COVID-19 and similar acute strokes caused by a blocked large brain artery.

In five cases, the stroke happened more than a week after the patient experienced typical COVID-19 symptoms of headache, cough and fever, and in one patient before other COVID-19 symptoms appeared. In all six patients, we found markedly raised blood levels of a protein fragment called D-dimer, which is associated with abnormal blood clotting. We also found evidence of an exaggerated inflammatory response to the coronavirus, as evidenced by high levels of ferritin and C-reactive protein in the blood.

We worked closely with clotting specialists in haematology to tailor treatment to treat and prevent blood clots – while avoiding catastrophic bleeding – for each patient. Unfortunately, one of the six patients died despite our best efforts, while the others are receiving ongoing treatment. What was causing this strange cluster of people with strikingly similar strokes and laboratory findings?

We were witnessing the unfolding of a distinctive pattern of stroke associated with the COVID-19 pandemic. At the same time, a report emerged from New York describing five similar patients, all under 50 years old with stroke due to “large artery occlusions”, and high levels of blood-clotting markers.

Doctors in the pandemic epicentre in Wuhan had also described three people with strokes and similar clot-related antibodies (called antiphospholipid antibodies). It was becoming clear that COVID-19 is not just a respiratory disease, and that these blood-clot complications were part of an inflammatory state.

The SARS-CoV-2 virus that causes COVID-19 has emerged as an exceptionally deadly virus, with an endless capacity to surprise the medical profession with new complications. Other recent studies reported blood clots (arterial, in the brain or heart; or venous, in the lungs or legs) in 50% of COVID-19 patients treated on the intensive care unit within two weeks. The patients we saw with stroke and COVID-19 also had a high risk of poor outcome or death.

Why does the SARS-CoV-2 virus behave in such an extraordinary way, causing deadly thromboses a week or two after the typical chest symptoms? This delayed phase seems to depend on the immune response to the virus: in some people, this goes into overdrive, with a huge release of inflammatory molecules. This “cytokine storm” activates endothelial cells (that line all blood vessels), stimulating blood coagulation (clotting), leading to a high risk of thromboses.

Also, since SARS-CoV-2 specifically locks on to proteins on cells called ACE2 receptors – which are involved in blood pressure control systems – blood pressure might fluctuate leading to strokes from either thrombosis or bleeding. The direct invasion of endothelial cells could also cause blood vessel inflammation (vasculitis). Once we have a better understanding of these mechanisms, it might be possible to target specific phases of COVID-19 to prevent devastating vascular complications.

In the meantime, these deadly consequences of thrombosis have prompted doctors to increase the dose of anticoagulants given to patients hospitalised with COVID-19. But in someone with a recent stroke, there is also a risk of bleeding into the area of damaged brain, making this a high-stakes dilemma. On the one hand, the risk of further blood clots, and on the other of a potentially fatal brain haemorrhage.

We are working with other groups around the UK to urgently develop a treatment trial to tackle this question. We plan to use the level of D-dimer (a marker of the amount of blood clotting) to select patients.

Another puzzle in the COVID-19 stroke story is that we are seeing far fewer patients with stroke than usual coming to hospital. We don’t know yet whether this is because more patients are staying at home (because of fear of COVID-19 and social isolation advice), or whether there really are fewer people having strokes. And if there are fewer strokes, why is this happening? We know that strokes are associated with inflammation and infection, so it is possible that social distancing has reduced infections, thus reducing the number of people having a stroke.

But the message to people with suspected stroke is clear. Our hospitals are open, stroke is still a medical emergency, and we have effective treatments that need to be given quickly. In the urgent assessment of stroke, the mantra of all health professionals – “time is brain” – is as true now as ever.

This article was first published in the Conversation on May 15, 2020.