A deep-sea soft coral garden habitat has been discovered in Greenlandic waters by scientists from UCL, ZSL and Greenland Institute of Natural Resources, using an innovative and low-cost deep-sea video camera built and deployed by the team. 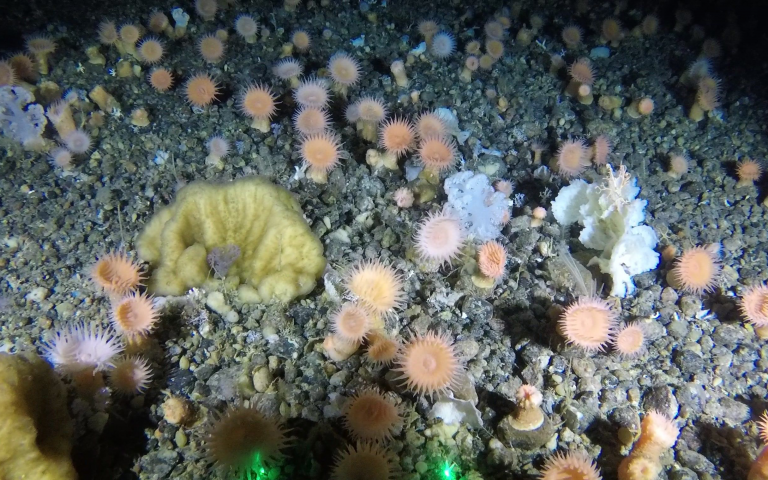 The soft coral garden, presented in a new Frontiers in Marine Science paper, is the first habitat of this kind to have been identified and assessed in west Greenland waters.

The study has direct implications for the management of economically important deep-sea trawl fisheries, which are immediately adjacent to the habitat. The researchers hope that a 486 km2 area will be recognised as a ‘Vulnerable Marine Ecosystem’ under UN guidelines, to ensure that it is protected.

PhD researcher Stephen Long (UCL Geography and ZSL (Zoological Society London)), first author on the study, said: “The deep sea is often over-looked in terms of exploration. In fact we have better maps of the surface of Mars, than we do of the deep sea.

“The development of a low-cost tool that can withstand deep-sea environments opens up new possibilities for our understanding and management of marine ecosystems. We’ll be working with the Greenland government and fishing industry to ensure this fragile, complex and beautiful habitat is protected.”

The soft coral garden discovered by the team exists in near total darkness, 500m below the surface at a pressure 50 times greater than at sea-level. This delicate and diverse habitat features abundant cauliflower corals as well as feather stars, sponges, anemones, brittle stars, hydrozoans bryozoans and other organisms.

Dr Chris Yesson (ZSL), last author on the study, said “Coral gardens are characterised by collections of one or more species (typically of non-reef forming coral), that sit on a wide range of hard and soft bottom habitats, from rock to sand, and support a diversity of fauna. There is considerable diversity among coral garden communities, which have previously been observed in areas such as northwest and southeast Iceland.”

The discovery is particularly significant given that the deep sea is the most poorly known habitat on earth, despite being the biggest and covering 65% of the planet. Until very recently, very little was known about Greenland’s deep-sea habitats, their nature, distribution and how they are impacted by human activities.

Surveying the deep sea has typically proved difficult and expensive. One major factor is that ocean pressure increases by one atmosphere (which is the average atmospheric pressure at sea level) every 10 metres of descent. Deep-sea surveys therefore have often only been possible using expensive remote operating vehicles and manned submersibles, like those seen in Blue Planet, which can withstand deep-sea pressure.

The UK-Greenland research team overcame this challenge by developing a low-cost towed video sled, which uses a GoPro video camera, lights and lasers in special pressure housings, mounted on a steel frame.

The lasers, which were used to add a sense of scale to the imagery, were made by combining high-powered laser pointers with DIY housings made at UCL’s Institute of Making, with help from UCL Mechanical Engineering.

The team placed the video sledge – which is about the size of a Mini Cooper – on the seafloor for roughly 15 minutes at a time and across 18 different stations. Stills were taken from the video footage, with 1,239 images extracted for further analysis.

Long said: “A towed video sled is not unique. However, our research is certainly the first example of a low-cost DIY video sled led being used to explore deep-sea habitats in Greenland’s 2.2million km² of sea. So far, the team has managed to reach an impressive depth of 1,500m. It has worked remarkably well and led to interest from researchers in other parts of the world.”

Dr Yesson added: “Given that the ocean is the biggest habitat on earth and the one about which we know the least, we think it is critically important to develop cheap, accessible research tools. These tools can then be used to explore, describe and crucially inform management of these deep-sea resources.”

Dr Martin Blicher (Greenland Institute of Natural Resources) said: “Greenland’s seafloor is virtually unexplored, although we know is it inhabited by more than 2000 different species together contributing to complex and diverse habitats, and to the functioning of the marine ecosystem. Despite knowing so little about these seafloor habitats, the Greenlandic economy depends on a small number of fisheries which trawl the seabed. We hope that studies like this will increase our understanding of ecological relationships, and contribute to sustainable fisheries management.”

The work was funded by: the Greenland Institute of Natural Resources; IUCN BEST 2.0; the North Atlantic Cooperation; the Ministry for Research in Greenland; the Environmental Protection Agency (Dancea) of the Ministry of Environment and Food of Denmark; the Nordic Council of Ministers and the Natural Environment Research Council.