A new gene therapy approach holds promise for treating a common group of inherited eye disease, according to a new UCL and Trinity College Dublin study in lab-grown ‘mini retinas’. 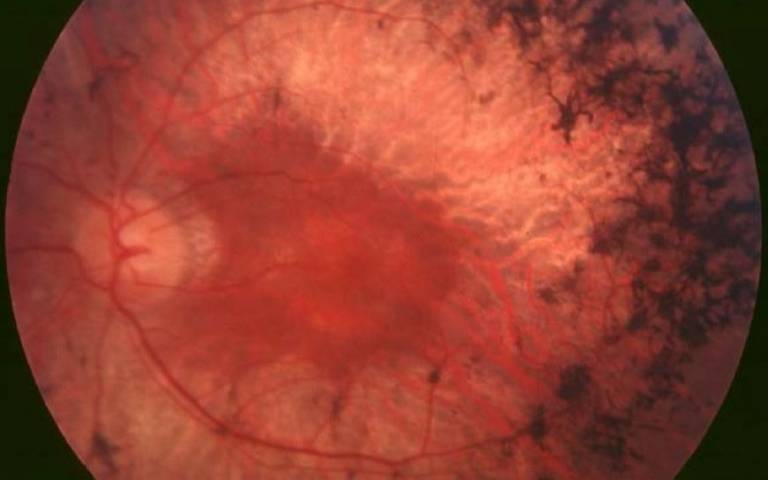 The findings, published in Stem Cell Reports, may contribute to new treatments for retinitis pigmentosa (RP), which affects thousands of people worldwide.

RP is a group of rare genetic disorders that involve a breakdown and loss of cells in the retina, which is the light sensitive tissue that lines the back of the eye. Common early stage symptoms include difficulty seeing at night and a loss of side (peripheral) vision, with blindness often developing in time.

Scientists have known for some time that mutations in the gene 'RP2', which is responsible for making a protein essential for normal vision, are associated with RP diseases. However, there are currently no therapies to treat people living with a number of RP diseases.

The research team used a modified common virus to deliver a normal, functioning copy of the RP2 gene into "mini retinas", which had been engineered from stem cells and which contained the defective version of the gene. The "mini retinas" developed in the UCL Institute of Ophthalmology simulated the RP2 disease in patients.

Subsequent analysis showed that these mini retinas had successfully taken up the functioning RP2 gene following the viral delivery and produced the essential protein associated with it.

Crucially, the treated mini retinas showed significant improvement - underlining that the approach had rescued them from RP.

He said: "It is an important development that we can now reproduce so many elements of inherited disease using these mini-retinas. It makes it possible for us to study in detail why people go blind and try to find ways to prevent blindness.

“It's exciting that the gene therapy seems to be so effective for this form of RP."

The Trinity team, led by Professor Jane Farrar, used their expertise in genetics and virus creation in the process.

Co-lead author Ciara Shortall, PhD researcher at Trinity College Dublin, commented: "For the last 30 years there has been a lot of buzz about gene therapies and their potential for treating a huge variety of debilitating diseases and disorders, but it is really only recently that science has overcome difficulties associated with such approaches and begun to bring potential therapies far closer.

"In relative terms it is now fairly easy to replace troublesome genes with functioning versions using non-harmful viruses, which is what we have done here. And while we are still some time and a lot of work away from an approved therapy it is hugely exciting to have begun a journey that could one day provide an effective treatment to rescue eyesight."

The study was funded by Moorfields Eye Charity, Fight for Sight, the NC3Rs, and Wellcome.