Bees grooming each other can boost colony immunity

Honeybees that specialise in grooming their nestmates (allogroomers) to ward off pests play a central role in the colony, finds a new UCL and University of Florence study. 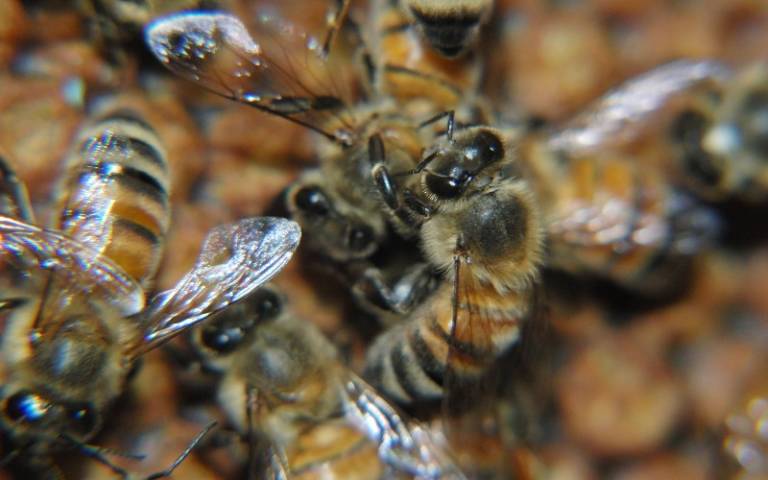 Allogroomer bees also appear to have stronger immune systems, possibly enabling them to withstand their higher risk of infection, according to the findings published in Scientific Reports.

Ectoparasites (parasites that live on the outside of a host’s body, such as mites) are a growing threat to honeybees worldwide, so the researchers say that supporting allogrooming behaviour might be an effective pest control strategy.

Lead author Dr Alessandro Cini, who began the project at the University of Florence before moving over to UCL Centre for Biodiversity & Environment Research, said: “An ectoparasitic mite, Varroa destructor, represents a major global threat to bee colonies. By understanding how allogrooming practices are used to ward off parasites, we may be able to develop strategies to promote allogrooming behaviour and increase resilience to the parasites.

“Here, we found worker bees that specialise in allogrooming are highly connected within their colonies, and have developed stronger immune systems.

“We suspect that if more bees engaged in these allogrooming behaviours that ward off parasites, the colony as a whole could have greater immunity.”

Among bees, allogrooming consists of a worker using its mouth  to remove debris, which may include parasites and other pathogens, from the body of another member of its colony.

In bee colonies, different groups of worker bees conduct different activities – one such specialisation is allogrooming, although it was not previously known how specialised the groomer bees are, and how their physiology may be different.

The current study focused on Apis mellifera, commonly known as the western honeybee, which is the most common species of honeybee and also the world’s most-used bee for both honey production and pollination in agriculture.

As allogrooming would likely put the grooming bees at an elevated risk of contracting pathogens and parasites, the researchers tested their immune systems, and found that their hemolymph (like blood, but for insects) could more effectively clear out potentially harmful bacteria than the immune systems of other bees in the colony.

Co-author Dr Rita Cervo from the University of Florence said: “By identifying a striking difference in the immune systems of the allogrooming bees, which are involved in tasks important to colony-wide immunity from pathogens, we have found a link between individual and social immunity.”

The researchers found that allogroomer bees occupy a central position in the colony’s social network, as they are more connected to bees across the colony than the average bee, enabling their grooming habits to benefit a large number of bees and keep the colony as pest-free as possible.

The researchers found that allogrooming is a relatively weak, transient specialty, as the groomer bees still devoted a similar amount of time to other tasks as the rest of the colony’s worker bees. The researchers say this shows that bees can develop physiological differences narrowly tailored to specific tasks, while still maintaining a degree of plasticity enabling them to switch to other tasks as needed.

The researchers did not detect any differences in how well the allogroomer bees could detect when other bees needed grooming, as their antennae were not more finely-tuned to relevant odours. It is possible they can detect who needs grooming in other ways, such as by noticing the ‘grooming invitation dance’ whereby bees shake their whole body from side‐to‐side.