A UCL supported trial, which is testing the Covid-19 vaccine candidate developed by Imperial College London, is now recruiting members of the public at UCLH. 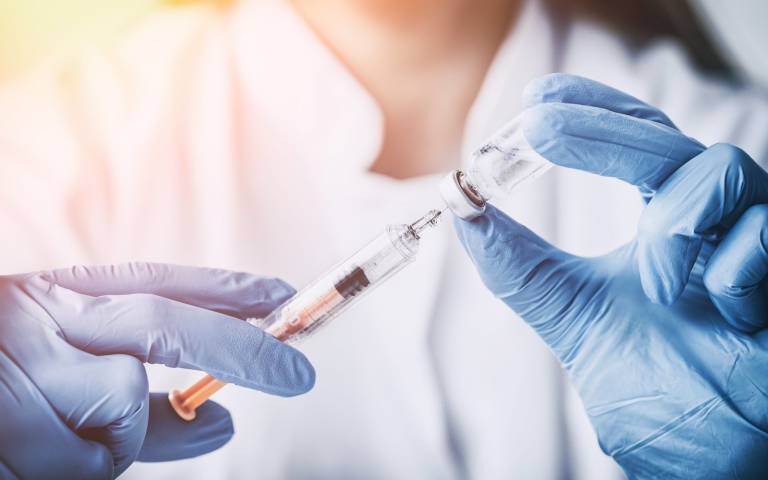 Pre-clinical research of the COVAC1 study has shown that the vaccine produced highly specific antibodies against SARS-CoV-2 in mice, which were able to neutralise the virus.

The trial is now testing whether the vaccine – which applies a new type of RNA technology – is safe and produces an effective immune response against COVID-19 in people.

Professor Vincenzo Libri (UCL Queen Square Institute of Neurology and Director of the NIHR UCLH Clinical Research Facility) is leading efforts for the trial at UCLH, which is one of the study sites, supported by his teams at UCLH and UCL.

COVAC1 is the second Covid-19 vaccine trial UCL is involved in – scientists at UCL’s Vax-Hub worked with Oxford University to provide the research base for their vaccine.

In total, as part of COVAC1, 300 ‘healthy volunteers’ aged between 18 and 75 are set to receive the vaccine for this early phase trial at six UK study sites. Of this, Professor Libri’s team plans to vaccinate 40 people in August. Researchers hope to vaccinate around 6,000 people across the UK in later phase trials.

Professor Robin Shattock and Dr Katrina Pollock at Imperial are leading the COVAC1 program overall. Their team launched the study in June. They have carried out rigorous pre-clinical safety checks of the vaccine, and early studies suggest the vaccine could provide the desired immune response.

The study is the first test of a new self-amplifying RNA technology, which has the potential to revolutionise vaccine development.

Many traditional vaccines are based on a weakened or modified form of virus, or parts of it, but the Imperial vaccine uses synthetic strands of genetic code (called RNA) based on the virus’s genetic material.

Once injected into muscle, the RNA generates copies of itself and instructs the body’s own cells to make copies of a spiky protein found on the outside of the virus. This should train the immune system to respond to the coronavirus so the body can easily recognise it and defend against it in future.

The UK government has put more than £41 million into the trial, which has also received £5m in donations.

Professor Libri said: “We are looking forward to working with Imperial to deliver this important phase I trial of a new type of vaccine. Having established significant infrastructure and expertise in large scale Covid-19 vaccine trials, UCLH is fully equipped to act as a major Hub for the successful delivery of this and future studies. I am grateful to the NIHR UCLH CRF vaccine trial team for leading on this huge endeavour.”

UCLH Director of Research and Chair of Medicine at UCL Professor Bryan Williams said: “A vaccine is our best chance of beating Covid-19 so it’s vital we are involved in trials like this as a hospital and as a BRC, especially where trials – like in this case – take a novel scientific approach.”

The NIHR Biomedical Research Centre at UCLH and UCL has set up a web page for any members of the public interested in taking part in the trial.