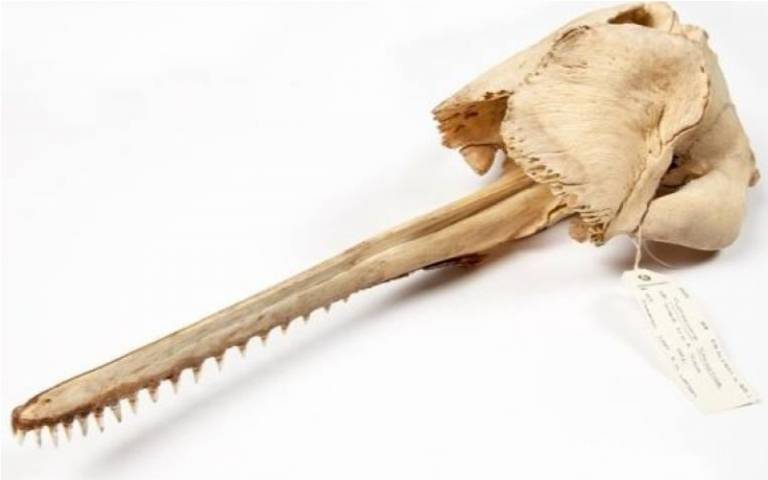 Some whales are wonky. You might not know it to look at them, but their skulls are actually incredibly asymmetrical. This mysterious feature helps with echolocation, the way that whales work out where things are by making sounds and sensing how they are reflected back.

But this wonkiness isn’t present in all whales. My colleagues and I recently conducted research to find out why and when wonky whales started to evolve in a different way to their symmetrical cousins. We now know wonky whale skulls first appeared around 30 million years ago, and that they continued to become even more asymmetrical as the creatures evolved into the modern species we know today.

In order to understand how wonky whales got this way, we needed to look at how they lived and adapted in the past. Fortunately for us, the whale fossil record is so remarkably represented that scientists have even called the whale “a posterchild of evolution”. Complete skulls and skeletons stretch right back to the earliest whales of 50 million years ago, and more fossils are dotted throughout whale history, right up to the living animals we know today.

With this record, we’re able to see that whales’ nostrils have moved from the tip of their snout to the top of their head, an evolutionary tactic to make for easy breathing at the surface of the water. And the skulls of whales with teeth (which technically includes dolphins, as well as species such as sperm whales) have become more lopsided, with the bones on one side in different positions to the same bones on the other side.

But why don’t all whales have this wonkiness? The first whales were called “archaeocetes” (which literally means “ancient whales”). They evolved from walking on land to being fully aquatic in a relatively short 8 million years or so.

We know that archaeocete fossils have wonky rostrums (or snouts). This might be a distortion of the fossils or a feature that helped archaeocetes work out which direction sounds were coming from underwater.

Then, around 39 million years ago, whales diverged into two groups: those with teeth in their mouths, known as the “odontocetes, and those with baleen (rows of bristles that allow whales to filter food from the water), known as the "mysticetes”.

At some point, the toothed whales evolved wonky skulls and echolocation. However, the mysticetes, which include the big baleen whales (such as blue whales), diverged down a completely different evolutionary path. They evolved baleen and filter feeding and skulls that are more symmetrical than both the archaeocetes and the toothed whales.

We wanted to understand why, and exactly when, this happened. So to track asymmetry in the evolution of the whale skull, we produced 3D scans of 162 skulls, 78 of which were fossils. By mapping this wonky shape change in the skull across the whale family tree, we could track precisely when in evolutionary history it first appeared and in which families it evolved.

Based on analyses of these skulls, naso-facial asymmetry (wonkiness) appears to have first evolved around 30 million years ago. This was after the transition from archaeocetes to modern whales, and after the split between the odontocetes and the mysticetes. Around the same time this wonkiness was appearing, these early toothed whales were evolving high-frequency hearing and complex echolocation.

Most surprisingly, this asymmetry has reached its highest levels in some specific animals such a sperm whales and narwhals and other species that live in deep or extreme environments.

This suggests that animals living in these complex environments, including belugas that live in icy, cluttered waters and river dolphins that live in shallow, murky rivers, have evolved a different echolocation ability such as a more diverse or discrete sound repertoire to help them navigate and hunt, and with it the bones around the nasal and face have become more asymmetrical.

This evolutionary path of toothed whales becoming ever more asymmetrical suggests that their skulls and the overlying soft tissues may continue to get wonkier as their echolocation techniques become more specialised.

These findings remind us not only of the complex evolutionary pathways that cetaceans have undergone to become the superbly adapted iconic ocean inhabitants that we know today, but also that despite living alongside some of the largest animals that have ever existed, there is still a lot for us to learn about them.