Scientists at UCL have identified how a subset of immune cells are activated to kill cancerous cells, a finding in mice which could hold the key to new powerful therapies against cancer. 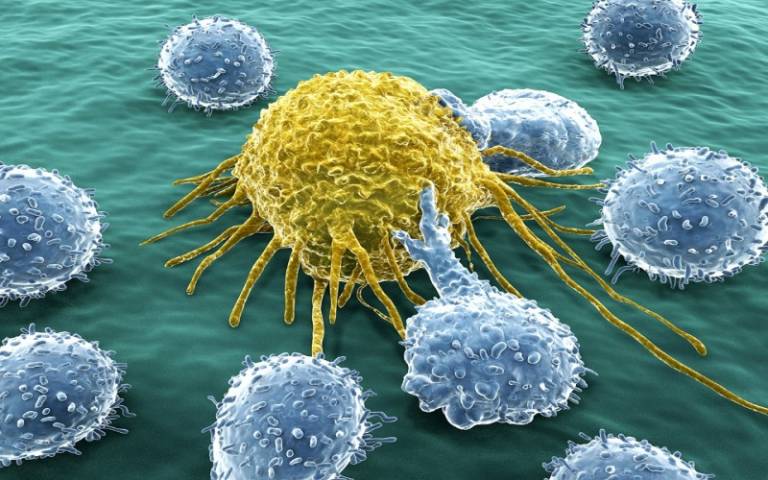 Published in Immunity, scientists examined the molecular and cellular mechanisms underpinning this activity, as part of an experimental study of immunotherapy in mice, funded by Cancer Research UK.

Researchers found that IL-2, a ‘growth factor’ for T cells and the ‘transcription factor’ Blimp-1 are responsible for initiating potent killer activity in CD4+ T cells within cancerous tumours.

Co-lead author, Professor Sergio Quezada, (UCL Cancer Institute), said: “We knew these immune cells had the ability to proactively kill cancer cells with incredible potency, but to maximise their potential, we needed to know how this mechanism was activated.

“Our discovery provides the evidence and rationale for utilising Blimp-1 to maximise the anti-tumour activity of CD4+ T cells.

“Work is now underway in our lab to develop new personalised cell therapies where the activity of Blimp-1 can be maxed up to drive potent tumour control.”

T cells are a subset of lymphocytes (white blood cells), which play a key role in the body’s immune response. In immunotherapy T cells are modified and used to attack cancer. These cells move around our bodies, looking for infected cells and killing them. However, T cells do not recognise most cancers, since cancers develop from our own tissues and appear normal to most T cells. The main challenge with T cell immunotherapy approaches is to find ways to direct T cells to attack cancer cells.

“Much remains unknown regarding how best to optimise these therapies, particularly to enable better activity in solid organ cancers.

“Our findings broaden our understanding of the regulators of T cell differentiation, illuminating new elements that might be targeted to enhance therapeutic efficacy.”

Dr Emily Farthing, research information manager at Cancer Research UK, said: “Research like this helps scientists better understand the intricacies of our immune system and how it can be utilised to kill cancer cells.

“This work in the lab adds to growing evidence for the potential of immunotherapy and will hopefully lead to the development of more effective treatments for people affected by cancer.”

The research was led by UCL Cancer Institute, with support from researchers at Imperial College London, Royal Free Hospital, London, University of Manchester and the Technical University of Munich, Germany. It was supported by a number of organisations including Cancer Research UK, UCLH NIHR Biomedical Research Centre (BRC) and Bloodwise.

*Previous research was carried out when Professors Quezada and Peggs were working at the Memorial Sloan-Kettering Cancer Center, New York.