The European Space Agency's Solar Orbiter, which carries instruments proposed, designed and built at UCL, launched today from Cape Canaveral in Florida at 4am UK time. 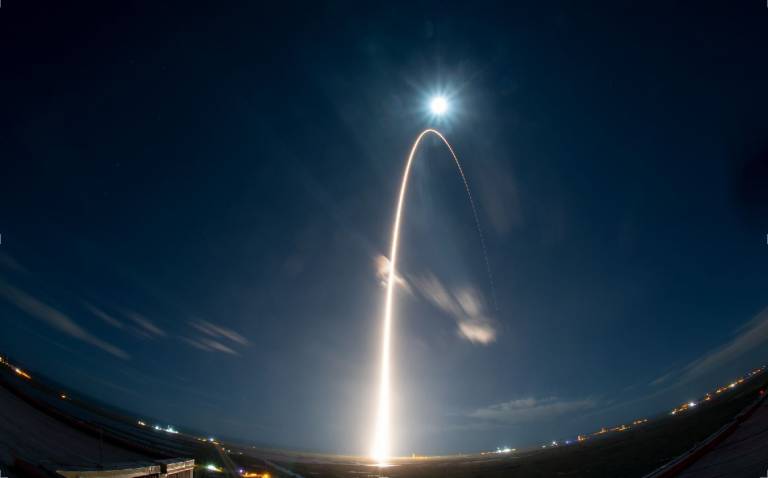 The mission will take the most detailed images ever of the Sun and provide crucial information about how our star’s volatile activity affects its atmosphere. This knowledge will help improve predictions of space weather events, which can disrupt and damage satellites.

Solar Orbiter, which will take just under two years to reach its initial operational orbit, will follow in the footsteps of NASA’s Solar Parker Probe, which launched in 2018. The two missions will offer complementary perspectives of the Sun – with Parker Solar Probe travelling through the Sun’s atmosphere, while Solar Orbiter observes the surface and near environment.

Over the course of its mission, the Solar Orbiter spacecraft will use the gravity of Venus to slingshot it out of the ecliptic plane of the Solar System, giving us new perspectives on our parent star. It will follow an elliptical orbit around the Sun, passing within the orbit of Mercury at its closest.

Cutting-edge heatshield technology, built by Airbus in the UK, will ensure the scientific instruments on board are protected from the immense heat of the Sun as they observe its turbulent surface, its hot outer atmosphere and changes in the solar wind.

Professor Chris Owen (UCL Mullard Space Science Laboratory), Principal Investigator on the ESA Solar Orbiter Mission SWA instrument, said: “This is a huge milestone for our international SWA consortium, which we first put together in 2006.  We are elated that our hard will now start to pay off through our unprecedented ability to measure the charged particles emitted at high speed from the Sun in the solar wind.  These measurements will be critical in advancing our understanding of how the Sun can influence and disrupt our near-Earth space environment.”

UCL is also a Co-Principal Investigator for the Extreme Ultraviolet Imager (EUI) – a suite of telescopes that will provide images of the hot and cold layers of the Sun’s atmosphere and corona, showing the dynamics in fine detail and providing the link between the Sun’s surface and outer corona.

Dr David Long (UCL Mullard Space Science Laboratory), Co-Principal Investigator on the ESA Solar Orbiter Mission EUI Investigation, said: “This is a great day for our consortium and for all of the scientists and engineers who worked so hard to make EUI a reality. We can’t wait to see the first images from EUI showing the solar corona like we’ve never seen it before. This will provide a vital insight into how the Sun is connected to and influences the heliosphere.”

Solar Orbiter will allow scientists to study our star in much more detail than previously possible and to observe specific features for longer periods than can be achieved by any spacecraft circling the Earth. The spacecraft’s orbit will also give unprecedented views towards the Sun’s poles.

The UK is at the heart of this European Space Agency (ESA) mission with UK industry winning £200 million worth of contracts and the UK Space Agency investing £20 million in the development and build of the instruments.

“This new mission demonstrates the UK’s leading role in the global space industry, while supporting our economy, creating jobs and helping establish the UK as a global science superpower.”

Chris Lee, Chief Scientist at the UK Space Agency, said: “I am incredibly excited by Solar Orbiter. It is the most important UK space science mission for a generation, both in terms of our leading industrial role on the satellite itself and our key academic roles on the science payload. It also contributes massively to the development of operational space weather forecasting as championed by the UK Met Office and so will have real impact for the UK public at large. Solar Orbiter truly is a “big beast” for our UK space community.”