How do you move an Auto-Icon?

In February 2020, UCL’s spiritual founder, Jeremy Bentham, was given a permanent new home in the university’s Student Centre, where he will be showcased and preserved to museum standard. 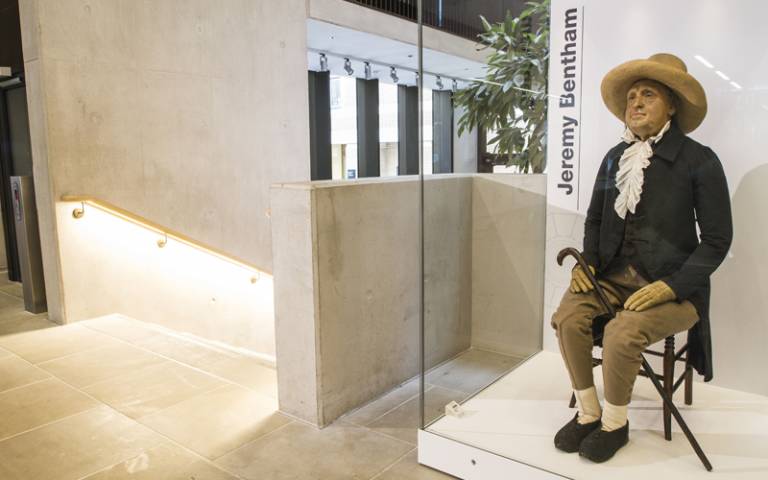 Until recently, the ‘Auto-Icon’ of the eccentric English philosopher – comprising Bentham’s skeleton and wax head – sat in a wooden box in the corner of the Wilkins Building, dressed in 18th century clothing and holding Bentham’s favourite walking stick known as ‘Dapple’.

Bentham is UCL’s most popular museum exhibit, attracting visitors from all over the world. His new home provides greatly enhanced preservation conditions, better visitor access and a place at the centre of the student community.

We asked Christina McGregor, Head of Collections Management at UCL Culture what is involved in conserving and moving Jeremy Bentham.

How do you move an Auto-Icon? 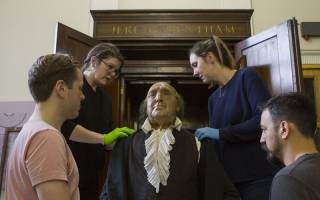 It’s a museum variation on an old joke – how do you relocate a 188 year old unique and extremely fragile clothed, seated, preserved skeleton? VERY CAREFULLY!

When Jeremy Bentham died in 1832, he insisted that his body be preserved after his death as an ‘auto-icon’, to advance medical science, believing that individuals should make themselves as useful as possible, both in life and death.

Bentham was well travelled in life and continues to be so in death. Aside from occupying various locations on campus, the auto-icon has also travelled to Hertfordshire as a World War II evacuee, taken a trip in the back of a red Morris Marina in 1981 to the Textile Conservation Centre at Hampton Court, visited the English Heritage x-ray facility in Portsmouth and been on loan to Germany twice, once in 1992 and again in 2002 before achieving a lifetime ambition of visiting America in 2018 for display at the Met Breuer museum in New York.

In February 2020 the auto-icon moved for the last time in the foreseeable future, making the short journey across the Japanese Garden to reside in the heart of the new Student Centre.

So how do you move an auto-icon? 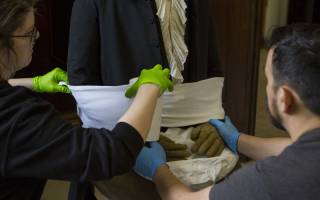 The process began months before his move with a thorough review of previous moves, condition reports, photographs and x-rays. It involved staff across UCL with different areas of expertise, including conservators, curator, exhibition manager, marketing and security.

The auto-icon comprises Bentham’s skeleton which is padded with linen tow, a coarse fibre held in place by stockinet fabric sewn into a body stocking, and dressed in his clothes including original jacket, trousers, gloves, underpants and stockings, and a wax work head dressed with real human hair. He is accompanied by his hat and ‘Dapple’, his walking stick.

As he recently travelled to New York, we were fortunate in having recent experience in preparing and transporting the auto-icon and assessing its condition and stability. During its move to New York, the auto-icon had also appropriate interventive treatments including removing the clothing, a gentle rinse of the linen shirt and underwear in deionised water and reapportioning of the tow padding since gravity had won the day. In the words of Curator Subhadra Das – he now has a strong core. 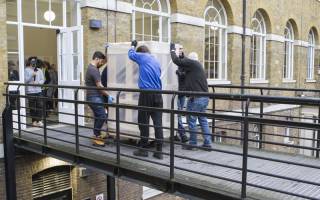 On the day, the move involved more than 15 people and was led by our move co-ordinator UCL Culture Conservator Emelia Kingham.

Secure areas were prepared with barriers and all the necessary equipment assembled in both the South Cloisters and the Student Centre including portable tables, flat-bed trollies, drills, cutting tools, staple gun and conservation materials - Tyvek sheeting, Plastazote (a type of foam), acid-free tissue and cotton straps. UCL Culture staff who performed the packing wore steel capped boots and Nitrile gloves.

Taking him out of his box 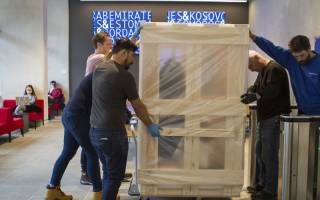 First out of the case were the accessories – his hat and walking stick which were packed into their bespoke boxes. These were followed by the auto-icon itself which was lifted out of the inner case onto a piece of Plastazote. The wax head was then – very carefully – removed to a bespoke packing box and placed on a dedicated accessories trolley for the move.

The move followed established fine art practice and principles for large and fragile sculpture so that all elements were supported and secured to minimise vibration. As Museum professionals we are often faced with the contradiction that lighter objects are more hazardous to move – whereas large, solid, heavy objects pose different challenges, these are often more easily addressed – given the choice I’d opt to move a solid cast bronze.

This is the point at which our training comes into play, calling on safe handling techniques, attention to detail and a thoroughly risk averse mind set. We placed a Tyvek cushion under both hands on the figure’s lap and secured the arms with cotton straps. Another Tyvek pillow was placed between lower legs and chair and the legs were also secured with cotton straps. The seated figure was then placed on a flat-bed trolley, secured and moved to an inner cordoned off area for packing into a travel frame. The auto-icon was covered with acid free tissue and supporting braces are fixed in place. The entire travel frame was covered with polythene sheeting and securely stapled. Even on a sunny morning with no risk of rain we needed to consider every hazard, even bird strike – which would definitely not be considered lucky!

Welcoming him to his new home 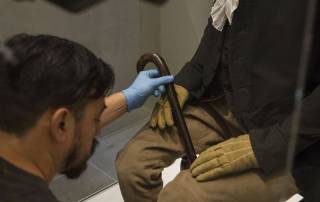 Once in the Student Centre, the auto-icon and accessories were unpacked in reverse order and installed with the assistance of the Exhibitions Manager and the Curator on hand. The entire process was methodical and unhurried and took several hours without a break.

The move to the Student Centre is a much longed for opportunity to improve the environment of the auto-icon by placing it in a new museum grade showcase. As distinctive as the wooden case was it did not assist us in preservation. The new case provides a sealed environment which is pollutant, dust and pest free and in which we can control humidity levels and limit the amount of ultraviolet light – all factors which over time would contribute to deterioration.  Additionally once installed in the new glass case the auto-icon will be visible from three sides.

I can’t help thinking that Jeremy Bentham would approve of his new location surrounded by 1,000 study spaces in a landmark sustainable building seemingly commensurate with his utilitarian principle of the greatest happiness for the greatest number.