No association between COVID-19 and Guillain-Barré syndrome

Neuroscientists at UCL have found no significant association between COVID-19 and the potentially paralysing and sometimes fatal neurological condition Guillain-Barré syndrome. 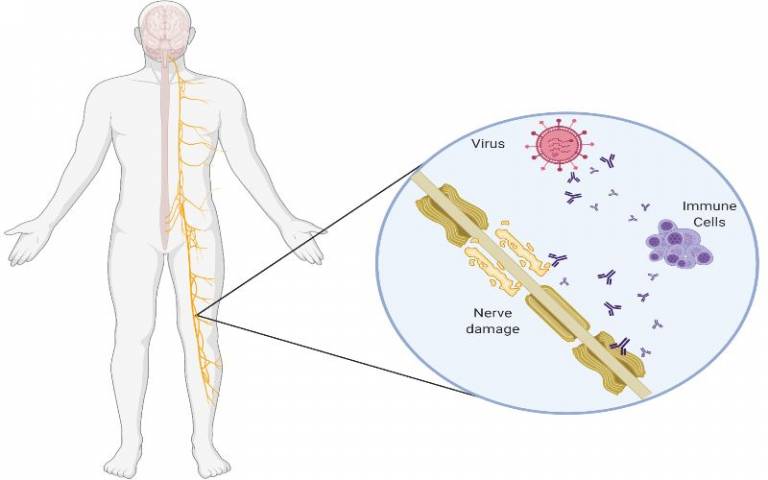 Researchers say the findings, published in the journal Brain*, along with a linked scientific commentary** by UCL and other international experts, should provide the public with reassurance, as the UK’s national coronavirus vaccination programme is rolled out.

Guillain-Barré syndrome (GBS) is a rare but serious autoimmune condition that attacks the peripheral nervous system, typically affecting the feet, hands and limbs, causing numbness, weakness and pain. While its exact cause is unknown, GBS often occurs after a gastroenteritis infection called Camplylobacter, with the immune system mistakenly attacking nerves rather than germs.

More cases of GBS were associated with the Zika virus outbreaks in Latin America (2016 and 2020) than expected by chance alone; and concerns have been raised in GBS research reports that a similar link may potentially exist between COVID-19 infection and GBS too.

In this epidemiological and cohort study, UCL researchers sought to investigate any causative association between COVID-19 infection and GBS.

The team assessed the number of GBS treatments reported to the NHS England National Immunoglobulin Database between 2016 and 2019. This was compared to the number of cases reported during the COVID-19 pandemic in the first half of 2020.

First author, Dr Stephen Keddie (UCL Queen Square Institute of Neurology) said: “The possibility of SARS-CoV-2 driving a global spike in GBS has been eagerly monitored with a number of published small case series already asserting a causal link. However, a surge in GBS cases after the SARS-CoV-2 pandemic has not been detected as happened in the Zika virus pandemic.

“Our epidemiological study shows there was no increased incidence in GBS during the first wave of COVID-19; rather, there was a decrease and therefore no causal link of COVID-19 to GBS can be made.”

Separately in this study the research team also tried to establish if there was any genetic or protein structure in SARS-CoV-2, the virus that causes COVID-19, which could trigger an immune response causing GBS. Unlike Camplylobacter, which contains human-like antigens causing an autoimmune response, no credible link was found with SARS-CoV-2.

Dr Keddie added: “Most COVID-19 vaccinations are based on the SARS-CoV-2 spike protein, which drives a complex immune response creating antibodies to fight infection.

“Our analysis shows SARS-CoV-2 contains no additional immunogenic material known or proven to drive GBS. Concerns that COVID vaccination might cause GBS in any significant numbers are therefore almost certainly unfounded.”

Around 1,500 cases of GBS occur in the UK each year (two per 100,000 population). History suggests, researchers say, that mass vaccination might be blamed for cases of GBS when occurring by chance, particularly with billions of people expected to be immunised globally.

Corresponding author, Professor Michael Lunn (UCL Queen Square Institute of Neurology) said: “When we immunise the population against COVID-19, GBS (and other neurological illnesses) will occur, by chance alone, in the weeks after immunisation, the window for a normal response to the vaccine.

“These cases may cause concern in patients, politicians, and regulators and stoke anti-vaccination concerns, even though it is likely that most, if not all of the cases, will be associated with vaccination by chance alone.

“Such a severe illness may result in suspension or withdrawal of vaccination as a ‘knee jerk’ safety reaction but this must not happen unless there is a statistically demonstrated link through careful monitoring that is proven. We must accept small risks with any vaccination programme on this scale, and these are far lower than the risk from COVID infection.”