There has been a dramatic decrease in cold-water plankton during the 20th century, in contrast to thousands of years of stability, according to a new UCL-led study. 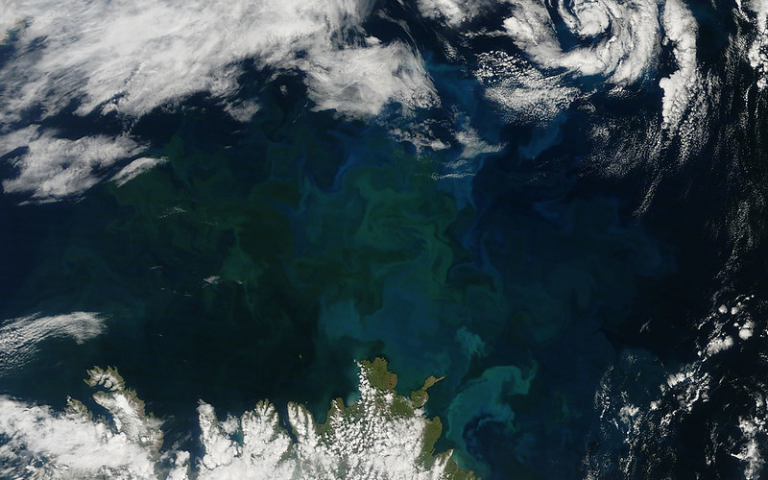 The research, published in Geophysical Research Letters, analysed the fossilised remains of plankton, sampled from the Northeast Atlantic Ocean, south of Iceland. The scientists uncovered a striking change in the types of species that inhabit these waters.

Lead author of the study, Dr Peter Spooner (UCL Geography), said: "The Northeast Atlantic is of crucial importance for the global climate system and marine ecosystems. In this study, we provide the first evidence that Northeast Atlantic circulation in the 20th century was unusual compared to the last 10,000 years.

"This change in Northeast Atlantic circulation caused a replacement of cool, subpolar waters with warmer subtropical waters near Iceland, and has impacted the distribution of marine organisms, particularly plankton. The most striking aspect of our work is the exceptional nature of the shift in the 20th century, in contrast to thousands of years of relative stability, with implications for understanding future change."

The research builds on earlier work which examined how the North Atlantic conveyor circulation has been changing over the industrial era, and was a collaboration with Woods Hole Oceanographic Institution (USA), the Scottish Association of Marine Science, and the University of Edinburgh. The scientists analysed around 150,000 specimens of planktonic foraminifera, tiny single-celled creatures that float in ocean waters.

They compared how different species of plankton fared over a 10,000 year period, using sediment from the bottom of the ocean to reconstruct how the Northeast Atlantic has changed.

They found that between around 6000 BC and 1750 AD, the region was dominated by Turborotalita quinqueloba, a species of plankton that prefer cooler waters (representing around 40% of all species of floating foraminifera).

However, during the 20th century the relative abundance of the species declined dramatically and was replaced by a transitional (warmer water) type of plankton, such as N. incompta and G. glutinata.

Co-lead author Dr David Thornalley (UCL Geography) said, "We are too used to thinking of the North Atlantic as being dominated by natural cycles that last decades. But this is only because direct observations do not go back far enough. These new records allow us to put our observations into a much longer-term context, and reveal the exceptional nature of what has happened in the 20th century."

As well as the change from cold to warmer species, the team found indicators of changing nutrient and food availability, all suggesting that waters from the subtropics were making their way to Iceland.

The findings correlate with other records from across the North Atlantic, which suggest that ocean warming and nutrient changes, driven by increased freshwater into the North Atlantic Circulation Belt, are likely to be the main culprit. The authors argue the evidence all points to changing ocean circulation.

Dr Spooner added: "The end of the Little Ice Age may have triggered a freshwater input early in the industrial era. And with climate change today, we are seeing more freshwater entering the Atlantic, through melting ice, increasing rainfall and pulses of freshwater from the Arctic Ocean."

The habitats of marine species, from plankton and fish to whales, are governed by ocean circulation, temperature and food. The research highlights that not only plankton has been affected.

Dr Spooner said: "Fisheries data only goes back so far, and it is difficult to separate the effects of overfishing from those of climate change, but for some species such as mackerel, which is now being regularly fished around Iceland, it seems clear that the changes we have seen are having a profound impact on where it can be found.

Professor Murray Roberts (University of Edinburgh) concluded: "We know that ocean circulation in the area can affect the whole ecosystem, all the way up to top predators such as pilot whales. If the ocean has changed this much in the last hundred years - which we usually think of as being quite a stable period - it is absolutely essential we understand the implications before new human activities like deep-sea mining are allowed to begin."

The research was funded by a National Science Foundation grant, the Leverhulme Trust and the European Union's Horizon 2020 Research and Innovation Framework Programme. The study forms part of a large European Union funded project, ATLAS, which has been investigating how changes in the ocean may affect deep-sea ecosystems, such as cold-water corals that provide important fish habitats and help recycle ocean nutrients.