A warming global climate could cause sudden, potentially catastrophic losses of biodiversity in regions across the globe throughout the 21st century, finds a new UCL-led study. 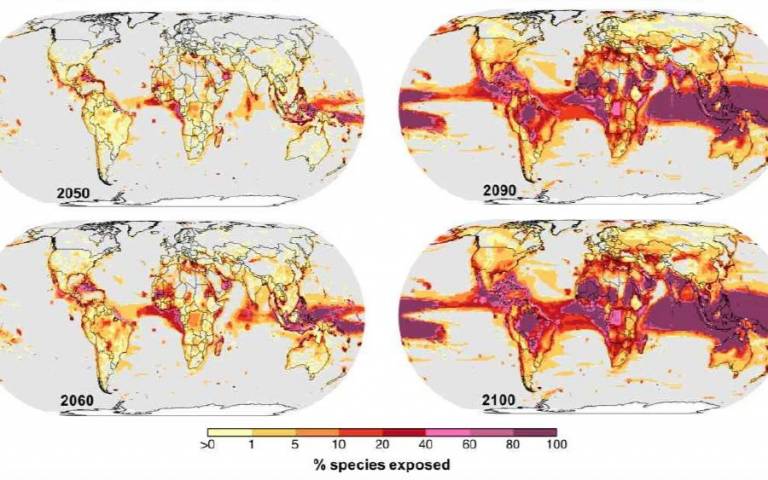 The findings, published today in Nature, predict when and where there could be severe ecological disruption in the coming decades, and suggests that the first waves could already be happening.

The study’s lead author, Dr Alex Pigot (UCL Centre for Biodiversity & Environment Research): “We found that climate change risks to biodiversity don’t increase gradually. Instead, as the climate warms, within a certain area most species will be able to cope for a while, before crossing a temperature threshold, when a large proportion of the species will suddenly face conditions they’ve never experienced before.”

“It’s not a slippery slope, but a series of cliff edges, hitting different areas at different times.”

Dr Pigot and colleagues from the USA and South Africa were seeking to predict threats to biodiversity over the course of the 21st century, rather than a single-year snapshot. They used climate model data from 1850 to 2005, and cross-referenced it with the geographic ranges of 30,652 species of birds, mammals, reptiles, amphibians, fish, and other animals and plants. The data was available for areas across the globe, divided up into 100 by 100 km square grid cells.

They used climate model projections for each year up to 2100 to predict when species in each grid cell will begin experiencing temperatures that are consistently higher than the organism has previously experienced across its geographic range, for a period of at least five years.

The study’s first author, Dr Christopher Trisos (African Climate and Development Initiative, University of Cape Town, and National Socio-Environment Synthesis Center – SESYNC, Maryland, USA), said: “The historic temperature models, combined with species ranges, showed us the range of conditions that each organism can survive under, as far as we know.”

“Once temperatures in a given area rise to levels that the species have never experienced, we would expect there to be extinctions, but not necessarily – we simply have no evidence of the ability of these species to persist after this point,” he said.

The researchers found that in most ecological communities across the globe, a large proportion of the organisms will find themselves outside of their niche (comfort zone) within the same decade. Across all of the communities, on average 73% of the species facing unprecedented temperatures before 2100 will cross that threshold simultaneously.

The researchers predict that if global temperatures rise by 4°C by 2100, under a “high emissions” scenario* which the researchers say is plausible, at least 15% of communities across the globe, and potentially many more, will undergo an abrupt exposure event where more than one in five of their constituent species crosses the threshold beyond their niche limit within the same decade. Such an event could cause irreversible damage to the functioning of the ecosystem.

If warming is kept to 2°C or less, potentially fewer than 2% of communities will face such exposure events, although the researchers caution that within that 2% includes some of the most biodiverse communities on the planet, such as coral reefs.

The researchers predict that such unprecedented temperature regimes will begin before 2030 in tropical oceans, and recent events such as mass bleaching of corals on the Great Barrier Reef suggest this is happening already. Higher latitudes and tropical forests are predicted to be at risk by 2050.

Dr Pigot said: “Our findings highlight the urgent need for climate change mitigation, by immediately and drastically reducing emissions, which could help save thousands of species from extinction. Keeping global warming below 2°C effectively ‘flattens the curve’ of how this risk to biodiversity will accumulate over the century, providing more time for species and ecosystems to adapt to the changing climate – whether that’s by finding new habitats, changing their behaviour, or with the help of human-led conservation efforts.”

Co-author Dr Cory Merow (University of Connecticut) said: “We hope that our findings could serve as an early warning system, predicting which areas will be most at risk and when, that could help target conservation efforts and improve future model projections. It may be valuable to develop a ten-year monitoring programme – similar to what climate scientists do, but for biodiversity – which could be updated regularly based on what actually occurs.”

The study was funded by the Royal Society, the National Science Foundation (USA) and the African Academy of Sciences.