Dr Ziri Younsi (UCL Mullard Space Science Laboratory) is the only UK researcher among hundreds of scientists in The Event Horizon Telescope team who are sharing the prestigious 2020 Breakthrough Prize in Fundamental Physics. 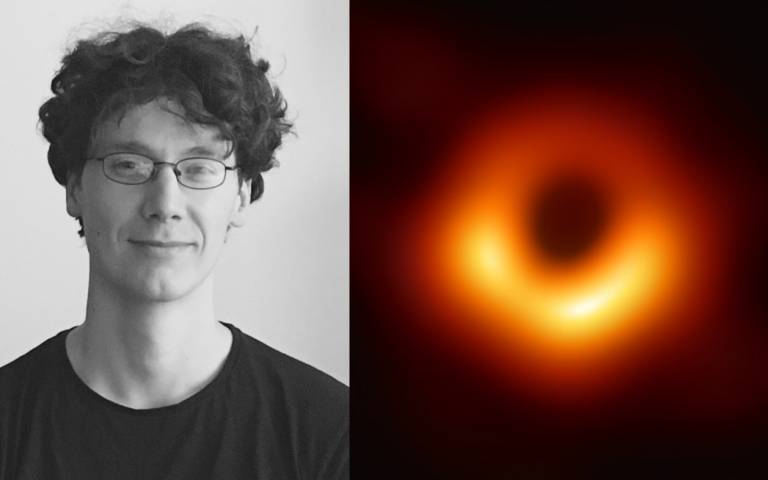 The Breakthrough Prize Foundation and its founding sponsors – Sergey Brin, Priscilla Chan and Mark Zuckerberg, Ma Huateng, Yuri and Julia Milner, and Anne Wojcicki – today announced the recipients of the 2020 Breakthrough Prize and 2020 New Horizons Prize, awarding a collective $21.6 million in recognition of important achievements in the Life Sciences, Fundamental Physics, and Mathematics.

Dr Younsi and his colleagues unveiled the first direct visual evidence of a supermassive black hole and its shadow in April having imaged the black hole at the heart of Messier 87, a galaxy 55 million light years from Earth.

The black hole measures just under 40 billion kilometres across, which is about 3 million times the diameter of the Earth and has a mass 6.5 billion times that of the Sun.

The breakthrough followed decades of observational, technical and theoretical work, and was achieved by a team of more than 200 researchers from Africa, Asia, Europe, North and South America.

To achieve what many thought impossible, the EHT linked eight ground-based radio telescopes globally to make an Earth-sized virtual telescope with unprecedented sensitivity and resolution.

Dr Ziri Younsi said: “It's a huge privilege to have been part of this project. We knew we had accomplished a significant scientific result and that this observation could play a crucial role in our understanding of the behaviour of light and matter in the most extreme environments in our Universe.”

“For this to be recognised by the Breakthrough Prize committee is truly special and I’m pleased that the hard work of the team has been acknowledged in this way.”

The EHT collaboration is now working on an image of Sagittarius A*, the black hole at the centre of our home galaxy, the Milky Way, which is predicted to be much smaller than Messier 87’s supermassive black hole at only four million times the mass of the sun.

Black holes are extraordinary cosmic objects with enormous masses but extremely compact sizes. They dramatically affect their environment by warping spacetime and super-heating any surrounding material. They expect it will be trickier to photograph Sagittarius A*as matter and light fall onto the hole faster, constantly changing its appearance.

“Prizes like this acknowledge the deep, meaningful tradition of learning, of us wanting to understand our place in the cosmos,” said Professor Shep Doeleman, Director of the EHT project at the Harvard–Smithsonian Center for Astrophysics. “It makes us stop for a moment, frankly. It gives us a moment to stop and appreciate that the universe is an amazing place.”

Now in its eighth year, the Breakthrough Prize, known as the “Oscars of Science,” annually recognizes achievements in the Life Sciences, Fundamental Physics and Mathematics, disciplines that ask the biggest questions and seek the deepest explanations. Considered the world’s most generous science prize, each Breakthrough Prize is $3 million. The 347 members of the EHT team will each receive about $8,600 (£7,000).

Previous UCL recipients include Professor Hiranya Peiris (UCL Physics & Astronomy) in 2017 who shared the Breakthrough Prize in Fundamental Physics for creating detailed maps of the early Universe, and Professor John Hardy (UCL Institute of Neurology) who won the 2015 Breakthrough Prize in Life Sciences for his pioneering research into the genetic causes of Alzheimer's disease, other forms of dementia and Parkinson's disease.