Most British adults, including a majority of Leave voters, think existing EU rules would provide “enough control” over EU immigration, according to a UCL and University of Cambridge survey conducted by YouGov. Crucially, the survey revealed that few people are aware of restrictions the UK could enforce under existing EU free movement regulations.

The survey (a nationally representative sample) of over 1,000 British adults, carried out from 20 to 30 August 2019, found a hidden consensus on EU immigration ranging across the political spectrum.

Almost half (47%) of the respondents incorrectly assumed that no restrictions at all were allowed on EU immigration, including a majority (58%) of Leave voters and 62% of those aged 65 or older. Only 13% knew that the UK would be allowed to keep a register of where EU citizens live. And only 20% knew about the “three-month rule”, namely that under EU regulations, the UK can insist that EU citizens who want to stay for more than three months must meet certain conditions (e.g. being in work, studying or with enough money to support themselves).

When informed about the “three-month rule”, two-thirds (64%) of respondents, including majorities from the Conservatives (61%), Labour (67%) and Liberal Democrats (81%), and most Leave (58%) and Remain (76%) voters, thought this would provide “enough control” over EU immigration. 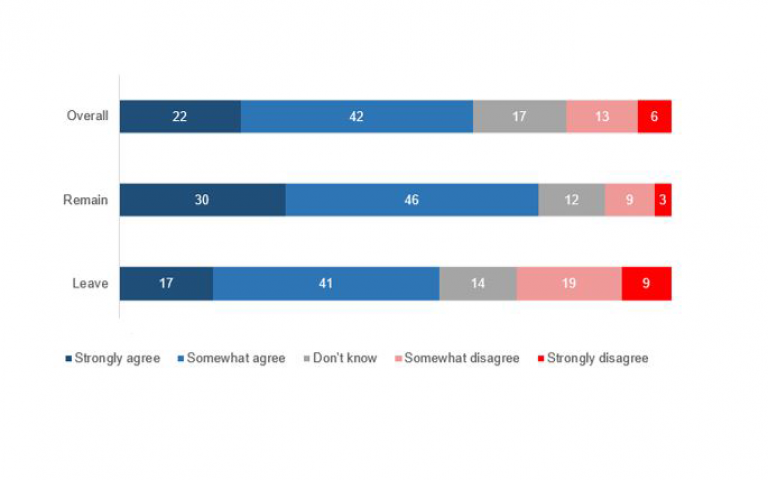 The survey also found that two-thirds (67%), including majorities of Conservative (80%), Labour (56%) and Liberal Democrat (59%) voters, would support the introduction of ID cards for everyone in the UK if this allowed the authorities to enforce immigration rules applied in other EU countries.

The results back up previous findings by YouGov in 2018 on attitudes towards ID cards and EU immigration policy, and also the 2017 Citizens’ Assembly on Brexit, led by UCL’s Constitution Unit.

The 2017 Citizens’ Assembly on Brexit was a nationally representative sample of British people who met over two weekends to debate the UK’s future relationship with the EU. The Assembly report concluded: “Most members wanted the UK to maintain free movement of labour with the EU, but to make greater use of controls that are available within the single market.” Adding that participants called on the government to “keep better data on migrants”.

Amidst ongoing polarisation over Brexit, the results of this survey suggest that political parties willing to explore new approaches to EU immigration might well find support from the British population.

Dr Alan Renwick, Deputy Director of UCL’s Constitution Unit, said: “Today’s results mirror the conclusions of the 2017 Citizens’ Assembly on Brexit. At that time, many Assembly members were surprised that the UK was not enforcing all the controls available to it on EU immigration. These results suggest that a majority of British adults would be content with a system that did. When it comes to accessing the single market and controlling immigration, it may be that the choice is not such an either/or one as is often supposed.”

Dr Lee de-Wit, Director of the Political Psychology Lab at Cambridge University, said: “A lot of research in psychology has explored the role of misinformation in political campaigns, but this poll highlights the simpler phenomenon of ‘missing information’. Given the UK has been debating Brexit for over four years, I am surprised that only 20% of our sample knew about the EU’s three-month immigration rule. Whatever your position on Brexit, this seems like a striking reflection on the quality of political debate in the UK.”