This week we meet Dr Jake Fairnie, Head of Digital Communications at UCL PALS. Jake shares his work on sustainability within and beyond UCL, including working on the 100% Veggie campaign, and his work co-running a mission to walk to the moon. 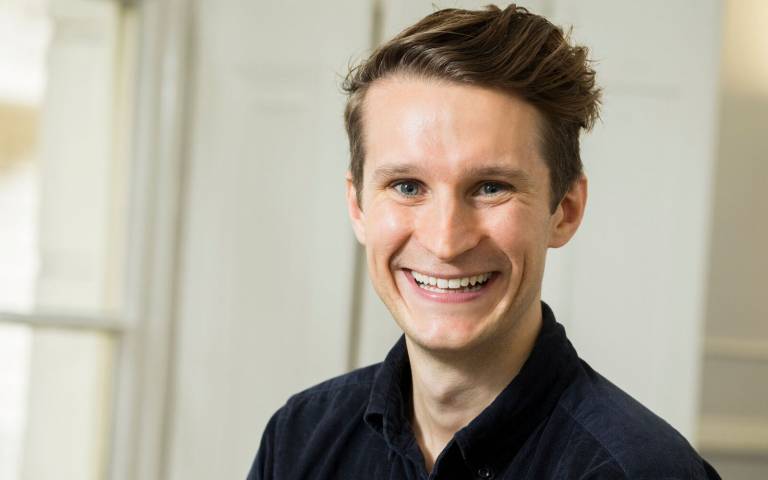 I am the Head of Digital Communications in the UCL Division of Psychiatry and Language Sciences (affectionately known as PALS). The role involves creating and publishing digital content that informs, inspires, showcases, entertains and engages with the broad PALS community.

The role is part time, which works well for me as I have my own creative media company that specialises in producing video and photography content for UCL and various other companies in London. My core aim is to help people communicate research to a wide audience with confidence and creativity.

I arrived at the gates of UCL in 2006 to embark on a Psychology BSc and then jumped straight into a PhD at the UCL Institute of Cognitive Neuroscience. Since then I’ve lectured, taken on various research posts and professional services jobs for the university, whilst building my creative media company.

I’ve worked on so many amazing projects across the university so it’s tough to narrow it down to one. I’m really proud that I handed in my PhD and lectured in the Gustave Tuck Lecture Theatre at the age of 25. Producing video content for the university also gives me a real buzz, but in terms of a project with long term impact beyond the sandstone walls of UCL – I couldn’t be prouder of the 100% Veggie campaign that I worked on with the PALS Green Impact team. The Division decided to exclude meat products from their events from the start of 2019, and I built the communication strategy around the project. The initiative has received an amazingly positive response across the institution, from undergraduate and postgraduate students to academic and administrative staff.

It was amazing to see the initiative spread to other divisions and faculties across UCL, and to other universities both nationally and internationally. It was when the University of Auckland’s Optometry Department went 100% vegetarian in February 2019 and attributed the decision to our campaign that we realised we were going viral.

There is now compelling evidence that reducing meat consumption decreases environmental impact on the planet and improves personal health. This initiative will no doubt ruffle some feathers but it's time, for the benefit of the planet and ourselves, to put the spam sandwiches down. I would love to encourage others to consider doing the same; on UCL campus and beyond.

As a Green Impact and Wellbeing initiative for UCL PALS, I’m co-running a mission to walk to the moon (find out more by clicking here). We are inviting all of our community to take part and help us get there as quickly as possible. You can see our progress and get involved by following the #PALSMoonWalk hashtag on Twitter. We'd love your support, both in terms of adding your step count and in terms of promoting the mission. I’m thrilled to report that we’re already out of the Earth’s atmosphere.

My album on loop at the moment is Techno Twins Greatest Hits. My parents were the electronic music duo and we re-mixed, re-mastered and re-released their music earlier this year and dedicated it to my late great father.

I’ll take a copy of The art of looking sideways by Alan Fletcher for the bookshelf and the astonishing true story Man on Wire for the film projector.

I regret rubbing ketchup in my eyes, but that’s Heinz sight.

Desmond Tutu would kick off the evening with a pre-meal blessing. I’d have Robin Williams on my right, Einstein on my left and would sit opposite someone from the future (like Greta Thunberg in 50 years time) to find out how everything worked out. That’s for the first course.

I’d play musical chairs before the main course and then be sat with David Bowie on my right, Audrey Hepburn on my left and then have Charlie Chaplin and my late great father opposite.

Heston Blumenthal would be on food duty, Yayoi Kusama would design the room and Christoph Niemann would illustrate the gathering.

Think creatively, encourage others and listen to Baz Luhrmann's Everybody's Free (To Wear Sunscreen) song daily. It has all the advice you'll need.

I made edible life-size replicas of my brain from organic dark chocolate cacao beans grown to protect the last mountain gorillas in the Eastern Congo (D.R.). Find out more here.

I’m in love with Amsterdam*. It’s one of the most bike-friendly cities in the world (there are more bikes than people) with magical markets and lots of parks and green spaces.

It’s also home to some of the best art galleries in the world with beautiful canals, unique architecture, a rich history and quirky, creative, hardworking, warm, pancake-baking, stroopwafel-snacking people. It's a very special place.

[*note that I may be biased as my partner is Dutch]