A three-dimensional map of the Universe that reaches deeper in space and time than ever before is one step closer as final testing begins on the Dark Energy Spectroscopic Instrument (DESI), designed and built in part by UCL physicists. 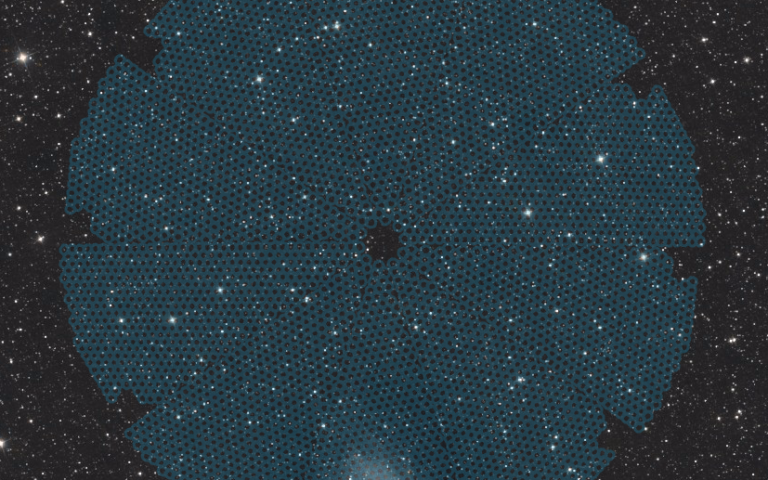 From early 2020, DESI will observe the light from 35 million distant galaxies and 2.4 million quasars over five years to precisely map their distance from Earth and gauge how quickly they are moving away from us.

This is important for accurately measuring and understanding more about dark matter and dark energy, which is driving the mysterious accelerating expansion rate of the universe.

Professor Ofer Lahav, (UCL Physics & Astronomy), chair of the DESI UK consortium of seven universities, said: “By looking back in time by up to about 11 billion years, DESI will expose secrets of the universe’s infancy and early development. This new information will help us better understand the physical processes driving the accelerating expansion of the universe, one of the key unsolved questions in physics.”

DESI is mounted on the four-metre Mayall telescope at Kitt Peak National Observatory near Tucson, Arizona.

The telescope’s top end has been replaced with DESI’s optical corrector, built by a team including UCL physicists, and a focal-plane system containing 5,000 fiber-optic “eyes” that independently move to capture the light from individual galaxies.

In ideal sky conditions, they enable the instrument to measure the light of 5,000 galaxies in about 20 minutes. The captured light is then split into bands of colour by spectrographs to map the movements of the galaxies relative to Earth.

UCL’s cosmologists have been heavily involved in the planning and delivery of the instrument in a collaboration involving nearly 500 researchers at 75 institutions in 13 countries.

Dr David Brooks and Professor Peter Doel (both UCL Physics & Astronomy) had key roles in the design, assembly and construction of the instrument’s optical-corrector, which houses a series of six lenses, the largest 1.1m across, at UCL. The corrector focuses light from the telescope’s existing four-metre diameter mirror onto the new focal plane, expanding the telescope’s viewing window by about 16 times.

“To provide crystal clear images, we had to ensure all six lenses were aligned to an extremely high accuracy – less than half of a hair’s thickness – and that this precision is maintained as the telescope moves to image the night sky,” explained Dr Brooks.

“It’s been incredibly satisfying seeing the first images from DESI using the specialist equipment made in the UCL Optical Science Laboratory and we are looking forward to the survey officially starting early next year,” said Professor Doel.

“After a decade in planning and R&D, installation and assembly, we are delighted that DESI can soon begin its quest to unravel the mystery of dark energy,” said DESI Director Michael Levi of the Department of Energy’s Lawrence Berkeley National Laboratory (Berkeley Lab), the lead institution in the DESI collaboration.

When DESI starts collecting data during its five-year survey, UCL cosmologists will be analysing it to reveal the secrets of the universe.

Dr Andreu Font-Ribera (UCL Physics & Astronomy and DESI Science Committee member), said: “We hope that the map created by DESI will reveal, for the first time, how dark energy and gravity have competed over time to shape the structure of the universe. It’s an extremely exciting time for cosmology and this instrument gives us our best opportunity to date to find out the true nature of dark energy which dominates the cosmos.”