The social care records of looked-after children and young people need to include those children’s voices, according to a collaborative research project led by UCL with the Care Leaver’s Association and the charity Family Action. 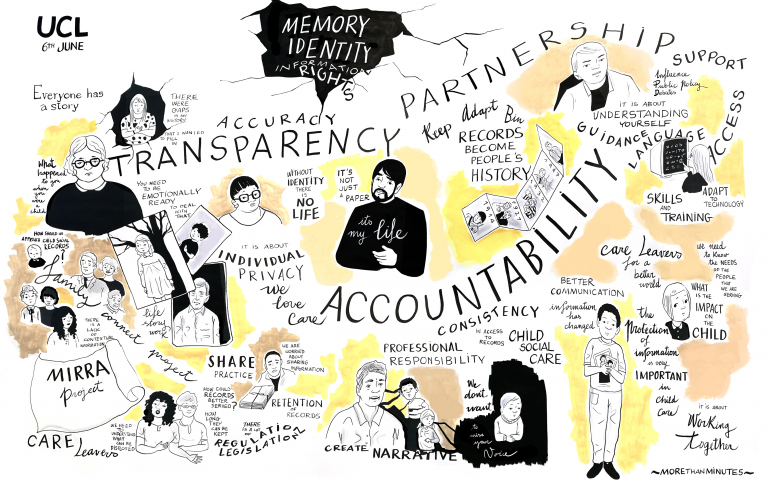 Researchers found that the voices of the children and young people who lived in social care were often entirely missing from their own records, causing significant distress and upset.

Care leaver John-george said: “One of the most profound things for me about the file, and it screams the loudest, is my lack of voice. And I just appear, my scrawled out writing, on like page 52.

“My voice is totally stolen and words are put in your mouth, saying this is how you feel about certain occasions and certain people, and at times there’s conflict with what I believe.”

Furthermore, despite care leavers placing huge significance on their records, the research found that the importance and value of effective recordkeeping was not widely recognised or understood by local authorities, who act as gate-keepers for these records.

Professor Shepherd said: “Social care records are a vital resource for memory-making and identity for adults who were in care as children.

“For many they contain the answers to critical questions about what happened to them and why.

“Gaps in someone’s personal narrative can be deeply traumatic, leaving them with feelings of blame and a lack of self-worth.”

To address the findings the project has set out a number of recommendations for local authorities, information and data professionals, and social workers:

Professor Shepherd said: “We must ensure care records put the experiences of the child at the heart of them, from what is written down in the first place, to how records are kept and stored, to how decisions are made about access.”

As part of the project a number of care leavers gave testimony to the experience of accessing care records later in life.

For many care leavers, assessing their records is a rite of passage.

Gina, who was in foster care in the 1970s and 1980s’s, explains: “There came a point where I wanted to know where I’d been, I wanted to know who’d fostered me, because there was little chunks of my life missing, like where I’d gone to school? Did I have any friends? How long was I there?”

Darren, a care leaver and project manager at The Care Leavers’ Association said: “I think we have organisations that just don’t understand why older care leavers come back to access their files, because there’s no culture of recognition of the life experiences of someone in the care system. There’s a cultural deficit.”

The research team also found that when people do receive their records they have often been heavily redacted, or censored, to remove any ‘third party information’.

“There’s other pieces of paper that are just blacked out,” she said. “And there’s absolutely nothing on them and you just look and think ‘why have you given me that piece of paper?’ What’s it actually telling me?

“And then there’s other pieces of paper where there’s just a sentence in there. And I’m looking at it … and all it’s showing me is I’ve been rejected again.”

Family Action will be launching a new website with resources to help care leavers access their records, and signpost support groups and counselling services.

David Holmes CBE, Chief Executive, Family Action said: “Family Action welcomes this important research and it’s equally important recommendations. A good care record, co-created with the child, can help to tell the story of a child’s life.  These records are so precious and can make such a difference in later life.  Facilitating access by care leavers to these records and ensuring high standards of recordkeeping needs to be viewed as a national priority.  Later this year, Family Action will be launching a free new website, Family Connect, which will provide information and resources for Care Leavers, as well as people who are adopted, on how to go about accessing their records and what that journey might involve.”

The MIRRA research was funded by the Arts and Humanities Research Council (AHRC).