UCL undergraduate student, Nonyeleze Irukwu, has been awarded a Thomas Clarkson Gold Medal at the Global Undergraduate Summit in Dublin. 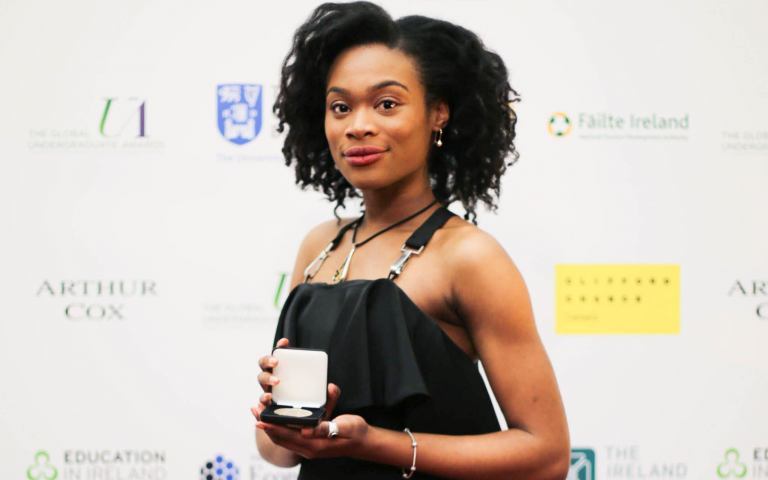 Nonyeleze was awarded Global Winner in the Politics & International Relations category for her final year extended essay, ‘This is America, This is Nigeria: A Bhabhaian response to interactions of black culture(s)’.

Her research examined the cultural interactions of different groups using the work of postcolonial theorist Homi Bhabha, arguing that often the Black US American experience is used to define a universal “black culture”. She compared two music videos, This is America by US rapper Childish Gambino and the Nigerian rapper Falz's version This is Nigeria, to show how in the act of imitation, one can still assert agency and difference.

Remarking on the significance of her achievement, Nonyeleze, said: “It is a great honour to win this award but even more so to have had the opportunity to meet all the winners and discuss their work.

“My research area is unconventional, so I am thrilled that the judging panel considered it worthy of international recognition against very stiff competition from around the world.

“I’d like to give thanks to my supervisor Dr Cathy Elliott for her genuine interest in my ideas and for introducing me to Bhabha. She always made me feel that my topic was worth writing about. The module she taught me in my penultimate year and her constructive feedback encouraged me to think and reassess more than any other time at university.”

The Global Undergraduate Summit, often referred to as the junior Nobel Prize, is an academic awards programme recognising undergraduate work.

The annual summit took place this year in Dublin from 11-13 November 2019, welcoming the world’s top performing students from 38 universities, 12 countries and 25 different categories to gather, collaborate and share research.

The Global Undergraduate Award received more than 3,400 submissions from undergraduates in 338 universities from 50 countries to the 2019 programme. There is no other event of this scale or academic breadth and quality that is focused exclusively on the work of undergraduates.

Students presented their work from the 25 different categories showcasing this year’s top undergraduate work from across the sciences, humanities, business and the creative arts. The winning students for 2019 represented universities in the UAE, the United States, Singapore, New Zealand, the UK, Canada, Australia, and Ireland.

The Global Winners received the Thomas Clarkson Gold Medal, named after the man who was described by the poet, Samuel Coleridge as ‘a moral steam engine’.

Professor Anthony Smith, UCL Vice-Provost (Education & Student Affairs), said: “This is a fantastic achievement for Nonyeleze and we’re pleased that her hard work and success has been recognised by an international programme, judged by professional academics from the world’s top universities. I hope that Nonyeleze’s achievement is an inspiration for other students wishing to make an impact and foster important connections with peers from across the world.”

Dr Garret Maher, Executive Director of the Global Undergraduate Award, said: “The Global Undergraduate Award offers a unique platform for the world’s most inspiring students to benchmark their work on a global scale, and ultimately, have this work recognised by an independent panel of judges as being of the highest standard within their discipline.”

“At a time when there is a lot of uncertainty in the world, the Global Undergraduate Summit embraces these students, enabling them to showcase their outstanding research to an audience of peers, academics and future employers, as they transition to become the next generation of change makers.”