Since 1942, UCL has hosted Lunch Hour Lectures, where academics give a one-hour presentation of their research. These are free and open to everyone. 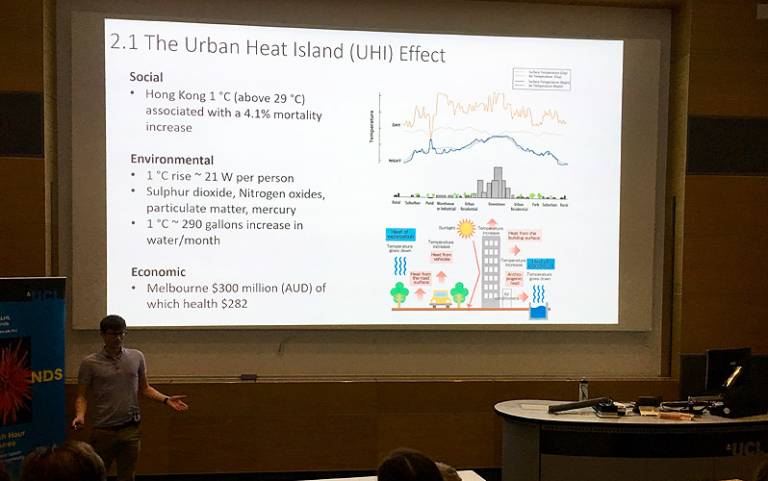 How do you cool down a city? As the temperature sinks well into single digits, this is hardly the question on everyone’s lips. But Dr. Andrew Maclachlan, from the UCL Centre for Advanced Spatial Analysis, might surprise you with his answer.

Half the world’s population now lives in cities, and an extra one billion are set to join over the next decade. As people move into urban areas, two things happen. Dark tarmac, which absorbs more of the sun’s radiation, is laid down. And trees are cut down to make way for development. All this leads to Urban Heating Islands, whereby metropolitan areas are up to 1°C – 1.6°C warmer than rural areas.

1°C might not sound like much; it’s not even the difference between a coat and a jacket. But there’s a lot in one degree, as Dr Maclachlan explained. In Hong Kong, an increase of 1°C above 29°C was associated with a 4 per cent rise in mortality. If you are an urban planner, you need to chill or be chilled.

One strategy is to plant trees, which not only cool cities but have mental health and biodiversity effects. Some cities have introduced voluntary incentives to plant trees, like Baltimore, which introduced vouchers for tree building. Others have focused more on policy, targeting a certain level of tree coverage.

Dr Maclachlan and his team proposed a different strategy. Instead of blindly throwing trees at the problem, they built a computer program that allows you to optimise tree locations by placing them in the hottest areas. The model can take a blueprint of a building, a block, or even a city, and tell you where is best to plant. Keeping the number of trees the same, the model lowered the temperature of one building’s blueprint by an impressive 0.7 degrees. If all urban planners used this modelling, we could well get the 1°C cooling we need.

Where would he plant a tree at UCL? Wider areas, on the outskirts of main roads, are best, so expect more greenery heading to Gower Street.