As ancient ocean floors plunge over 1,000 km into the Earth's deep interior, they cause hot rock in the lower mantle to flow much more dynamically than previously thought, finds a new UCL-led study. 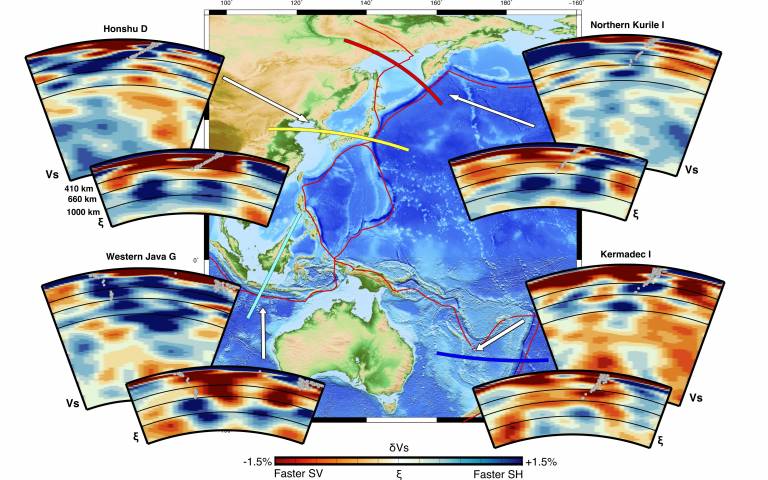 The discovery answers long-standing questions on the nature and mechanisms of mantle flow in the inaccessible part of deep Earth. This is key to understanding how quickly Earth is cooling, and the dynamic evolution of our planet and others in the solar system.

“We often picture the Earth’s mantle as a liquid that flows but it isn’t – it’s a solid that moves very slowly over time. Traditionally, it’s been thought that the flow of rock in Earth’s lower mantle is sluggish until you hit the planet’s core, with most dynamic action happening in the upper mantle which only goes to a depth of 660 km. We’ve shown this isn’t the case after all in large regions deep beneath the South Pacific Rim and South America,” explained lead author, Dr Ana Ferreira (UCL Earth Sciences and Universidade de Lisboa).

“Here, the same mechanism we see causing movement and deformation in the hot, pressurised rock in the upper mantle is also occurring in the lower mantle. If this increased activity is happening uniformly over the globe, Earth could be cooling more rapidly than we previously thought”, added Dr Manuele Faccenda, Universita di Padova.

The study, published today in Nature Geoscience by researchers from UCL, Universidade de Lisboa, Universita di Padova, Kangwon National University and Tel Aviv University, provides evidence of dynamic movement in the Earth’s lower mantle where ancient ocean floors are plunging towards the planet’s core, crossing from the upper mantle (up to ~660 km below the crust) to the lower mantle (~660 – 1,200 km deep).

The team found that the deformation and increased flow in the lower mantle is likely due to the movement of defects in the crystal lattice of rocks in the deep Earth, a deformation mechanism called "dislocation creep", whose presence in the deep mantle has been the subject of debate.

The researchers used big data sets collected from seismic waves formed during earthquakes to probe what’s happening deep in Earth’s interior. The technique is well established and comparable to how radiation is used in CAT scans to see what’s happening in the body.

“In a CAT scan, narrow beams of X-rays pass through the body to detectors opposite the source, building an image. Seismic waves pass through the Earth in much the same way and are detected by seismic stations on the opposite side of the planet to the earthquake epicentre, allowing us to build a picture of the structure of Earth’s interior,” explained Dr Sung-Joon Chang, Kangwon National University.

By combining 43 million seismic data measurements with dynamic computer simulations using the UK’s supercomputing facilities HECToR, Archer and the Italian Galileo Computing Cluster, CINECA the researchers generated images to map how the Earth's mantle flows at depths of ~1,200 km beneath our feet.

They revealed increased mantle flow beneath the Western Pacific and South America where ancient ocean floors are plunging towards Earth’s core over millions of years.

This approach of combining seismic data with geodynamic computer modelling can now be used to build detailed maps of how the whole mantle flows globally to see if dislocation creep is uniform at extreme depths.

The researchers also want to model how material moves up from the Earth’s core to the surface, which together with this latest study, will help scientists better understand how our planet evolved into its present state.

“How mantle flows on Earth might control why there is life on our planet but not on other planets, such as Venus, which has a similar size and location in the solar system to Earth, but likely has a very different style of mantle flow. We can understand a lot about other planets from revealing the secrets of our own,” concluded Dr Ferreira.

The study was funded by the Leverhulme Trust, NERC, the Korea Meteorlogical Administration Research and Development Program, the Progetto di Ateneo FACCPTRAT12 granted by the Università di Padova and by the ERC StG #758199 NEWTON.