Ancient aquatic crocodiles fed on softer and smaller prey than their modern counterparts and the evolution of skull shape and function allowed them to spread into new habitats, reveal paleobiology researchers from the University of Bristol and UCL. 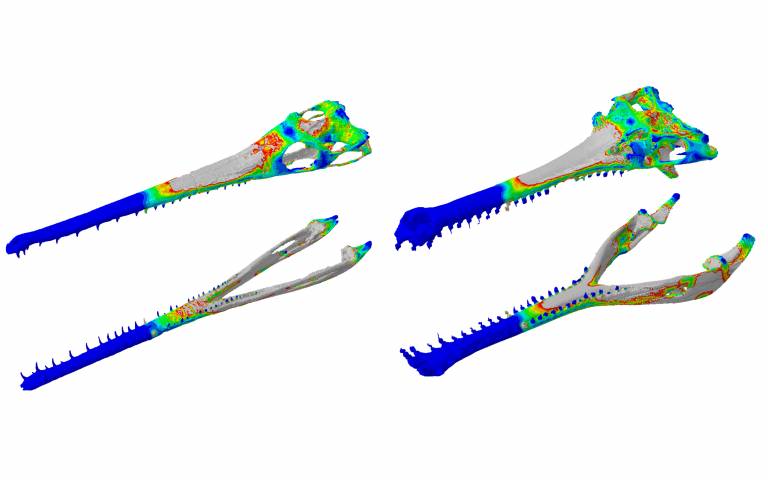 For the study, published today in Paleontology, the team digitally reconstructed the skull of an extinct species of marine crocodile and compared it to similar living species to gain new insights into the diet of ancient crocodiles and their role in ecosystems around 230 million years ago.

Modern crocodiles are known for their characteristic anatomy and apex predator role in semiaquatic ecosystems but their ancient ancestors, which lived side-by-side with the first dinosaurs in the Late Triassic period, were tiny land-dwellers that soon gave rise to a great diversity of forms.

One group, the thalattosuchians, went into the sea and became marine specialists. They had long, thin snouts, resembling that of the living gharial, which feeds on fish in rivers in India. An early member of this group, Pelagosaurus typus, inhabited shallow marine environments in what is now Europe during the Early Jurassic.

By looking at the differeing shapes of their skulls, scientists were able to work out what crocodiles were eating. Te biomechanical and macro-evolutionary approaches applied in this latest study show how ancient crocodiles came to occupy diverse and specialised ecological niches.

PhD student Antonio Ballell, from the University of Bristol’s School of Earth Sciences and lead author of the study, said: “We used up-to-date techniques to explore how the skull of this extinct crocodilian functioned and evolved. Our first aim was to compare how the skull was stressed under simulated feeding loads in Pelagosaurus compared to the living gharial and gain new understanding of how the extinct species fed.”

Using modern computational methods, coupled with 3D digital skull models obtained from CT scans of Pelagosaurus and the gharial, the research team looked for muscle scars in the fossil that mark where the muscles once attached, allowingthe jaw-closing musculature to be reconstructed.

This approach was coupled with finite element analysis, an engineering technique that predicts how biological structures behave under specific loading scenarios such as biting.

Co-author, Dr Laura Porro from UCL Cell & Developmental Biology, said: “Modern computational techniques allow palaeobiologists to ‘bring extinct species back to life’ and infer how they fed and lived from the anatomical information provided by fossils. Using CT scans, we are able to visualise internal areas of the skull and scars on the bones, indicating where muscles attached, that scientists had never observed before. Engineering methods allowed us to test how the skull responds to biting, 230 million years after this animal’s last meal.”

Their results show that the weaker jaw of Pelagosaurus might indicate that it specialized on softer and smaller prey than the modern gharial to which it is often compared.

The team also analysed how fast feeding-related characters of the jaws evolved in a wide range of extinct crocodilian species. This showed that traits related to the long snouts of thalattosuchians evolved rapidly, suggesting that they occupied a very specific marine ecological niche soon after the origin of the lineage.

Co-author Dr Benjamin Moon from the University of Bristol added: “Pelagosaurus and closely related species differ from other crocs in their slender lower jaws, and this helped their evolutionary success in the Early Jurassic, when marine ecosystems were still recovering from the devastating End-Triassic mass extinction.”

Antonio Ballell concluded: “Our findings highlight the spectacular diversity of feeding strategies present in extinct crocodile relatives and how this was important in the evolution and diversification of the group. We found that different lineages explored and conquered ecological niches in different ways”.

“The evolutionary history of crocodiles was very complex and looking at it from a functional perspective is fundamental to understanding it.”

The research was carried out as part of the MSc in Palaeobiology at University of Bristol and was funded by La Caixa Foundation, Spain, and the Natural Environment Research Council (NERC).