Kaska is Professor of Artificial Intelligence in Education (from October 2019) and Head of Research for the Department of Culture Communication and Media at the UCL Institute of Education (IOE). 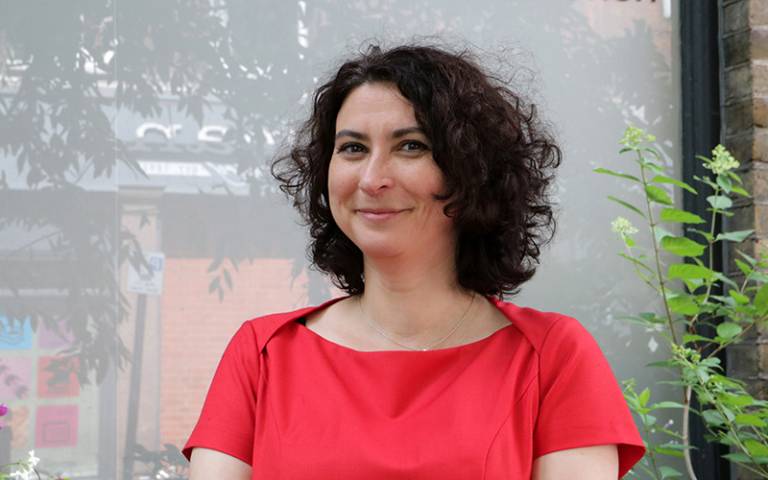 I am Professor of Artificial Intelligence in Education (from October 2019) and Head of Research for the Department of Culture Communication and Media at the UCL Institute of Education (IOE). As a researcher I focus on Artificial Intelligence (AI) in Education, looking at both engineering AI applications for education and researching the requirements for and impact of AI on human learning and development – my broad area of specialisation is AI and social inclusion, at the intersection of computational linguistics, psychology, affective computing and user modelling.

As Head of Research for my department, my role involves administering REF processes as well as developing and nurturing a research culture in which all colleagues can thrive and feel valued. The latter is super important to me as I believe that you cannot have a successful academic department without the academics at all stages in their careers feeling they are appreciated and supported from within.

I joined the IOE, UCL Knowledge Lab (previously London Knowledge Lab) straight after my postdoc at Edinburgh Informatics in late 2006 after 14 years of living, studying and working in Scotland. Prof Richard Noss (the founding director of the UCL Knowledge Lab) thought I’d be suitable for one of the Research Councils UK Academic Fellowships, even though at the time he made me believe that he thought AI in Education (in the Intelligent Tutoring Systems sense) was possibly an abomination. I’ll be forever grateful to him, because joining the UCL Knowledge Lab changed the way I think about AI and education.

I feel proud of never giving into the pressure of having to prove myself to either engineering or social sciences alone and persevering with the interdisciplinary, human-centred focus in my AI work. I am also quite proud of retaining the enthusiasm for my work and being driven out of bed every morning by the desire to learn and do more.

I’ve got a couple of projects going on right now including a British Council funded project called JOLLY, which looks at the use of technology to support children in the Philippines in learning English through pop music and rhyming, and the EEF/Wellcome Trust project called unLOCKE within the Centre of Educational Neuroscience.

In unLOCKE, we developed a school intervention for training primary school children’s inhibitory control when learning counterintuitive concepts in maths and science. unLOCKE builds on the AI-agent technology developed in a series of projects (ECHOES, SHARE-IT, TESSA) that I led in the context of supporting autistic children in exploring and rehearsing social communication skills. In the remaining year of unLOCKE we will be focusing on enhancing the interactivity and adaptivity of the software, by leveraging the AI as much as possible.

Presently, I am also working on consolidating a lot of my AI in Education (AIEd) work in a bid to communicate the critical role of AIEd research in informing the broader AI directions, policies and debates, and to define a programme of further fundamental research that is much needed at the intersection of AI and human cognition.

It depends on my mood and context.

I listen to anything from the Ella and Louis 1957 album (a total treat on a rare sunny Sunday afternoon when there are no deadlines to worry about), Bruckner symphonies (the 8th is the most gorgeously moving piece), operas (Richard Strauss’ The Last Four Songs sang by Jessye Norman is most divine), to Pink Floyd and Led Zeppelin.

Films: Two of Ridley Scott’s – Blade Runner, because it never fails to mesmerise me and because of my middle-age nostalgia for the young Harrison Ford, and The Martian, because it’s so utterly genius in being funny about a desperately impossible situation. In terms of novels, I read a lot of trash at night to get me go to sleep, but the hilarious, poetic and clever novels (especially the sci-fi) by Stanislaw Lem are my go to treats.

I’m terrible at jokes, so I’ll skip this question

My friends and family.  But I know I am supposed to pick someone awesomely famous, so I’d choose Richard Feynman, because I’d imagine he might give me the benefit of the doubt that I’d be able to understand what he’s talking about. Plus, he was famed for being relaxed and funny, so we probably wouldn’t be obliged to remain serious throughout and could actually enjoy the food as well as the conversation.

Stop apologising for being a working mother and for having to spell your name.

I was trained at the Great Theatre of Warsaw Poland (which features the biggest operatic stage in Europe) as an opera singer (soprano, then mezzo) since the age of five, a pianist since the age of six, and then at eighteen as an theatre actor at the High Theatre Academy in Warsaw. I quit acting after my studies director told me I’d never be a good actor because I think too much, so I went on to study Linguistics and AI at Edinburgh Uni and became an academic instead. Also, a photo of me rock-climbing a Vdiff route features in the 2008 climbing guide to Southern Sandstone, but the English photographer forgot how to spell my name so I’m never officially acknowledged (I did both spell my name to him and apologised for having to do so).