Early MRI scans of people living with multiple sclerosis (MS) could predict how their condition will progress, including how disabled they are likely to become, finds a new UCL-led study. 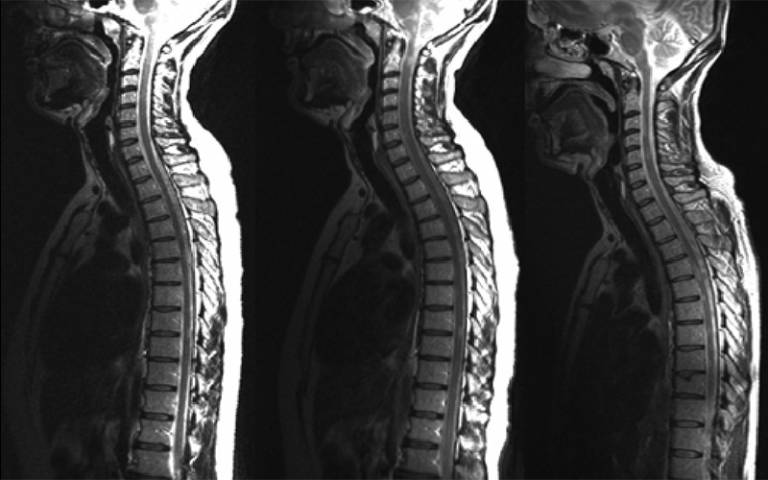 In the MS Society-funded study, published today in Brain, the researchers report that MRI scans from when individuals were first diagnosed contained signs of future progression.

“We already use MRI scans to diagnose MS and to monitor the course of the disease. These findings – which suggest existing measures, routinely available in clinical practice, can provide a long-term prognosis – are a major advance that will be welcomed by many in the MS community,” said Dr Wallace Brownlee (UCL Queen Square Institute of Neurology), who led the research with UCL colleague Professor Olga Ciccarelli.

“MS can be relentless, painful, and disabling, but being able to predict how a person’s MS might progress will mean more certainty, better treatment choices, and hopefully better long term outcomes for everyone living with the condition,” he added.

People with CIS have experienced one episode of neurological symptoms and often go on to be diagnosed with MS.

They found that early spinal cord damage indicated people were much more likely to go on to develop the secondary progressive form of MS, which currently has no treatment and is where disability gets steadily worse. A spinal cord MRI indicated the level of disability a person was likely to face in future.

They also found an association between lesions seen in the brain at the time of CIS, and a person’s physical and cognitive performance later in life.

Over 100,000 people live with MS in the UK, and one of the most difficult things about being diagnosed is the uncertainty of the condition. The course MS takes is highly variable with significant differences in terms of how quickly it progresses, how disabled a person may become, and how cognitive performance is affected.

Director of Research at the MS Society, Dr Susan Kohlhaas, said: “MS damages nerves in your body and makes it harder to do everyday things like walk, talk, eat and think. It’s also different for everyone and there isn’t currently a consistent way of predicting what course MS might take. This can be incredibly distressing and make decisions about treatment, family, and life in general very difficult.

“By identifying key factors that appear very early on and indicate how someone’s MS might develop, this study has proved crucial.”

After 15 years, all participants were followed-up with, and their disability was assessed using measures including the Expanded Disability Status Scale (EDSS). 94 (57%) had the relapsing form of multiple sclerosis, 25 (15%) had the secondary progressive form, 45 (27%) remained CIS and two people (1%) had developed other disorders.

As well as knowing how a person’s condition might progress – and being able to plan for their future accordingly – this information will help healthcare professionals personalise treatment plans, which is particularly important for patients identified as high-risk for disease progression.

A recent study suggested early intensive treatment leads to a better MS prognosis – but without information about how a person’s disease is likely to progress it can be challenging to make such a decision.