A new giant virus that infects bacteria commonly found in the human gut has been discovered by an international team led by researchers from UCL and UC Berkeley. 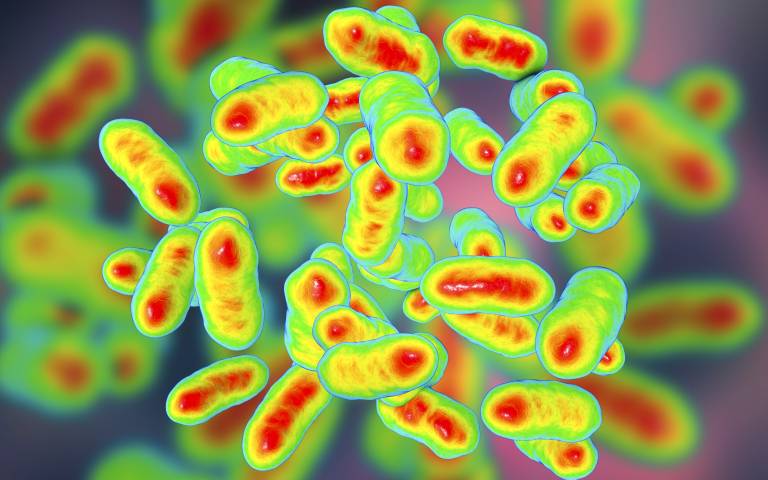 The new ‘megaphage’ called ‘Lak’ is the same size as some bacteria and is the biggest ever reported phage found in the human gut.

A study, published in Nature Microbiology, describes the discovery of Lak phage and reports that they specifically infect bacteria called Prevotella which live in all people but most notably those who have a traditional ‘hunter gatherer’ high in fibre and low in fat.

Prevotella is also associated with upper respiratory tract infections and is prevalent in periodontal disease, which means the new megaphage may open up the development of new phage-based treatments for infections caused by Prevotella.

“Despite the high prevalence of phage in our environment and bodies, we still have much to learn about the role they play in the human microbiome – the collection of 100 trillion microorganisms that live in each of us,” explained study co-author Professor Joanne Santini (UCL Structural & Molecular Biology).

“Phage could be really important in regulating the populations of microorganisms living in our bodies but more research is needed to understand how these viruses affect our health – for better or worse. Phage could be killing bacteria that would otherwise cause infections, or they could be attacking bacteria that benefit us; we don’t know.”

While Prevotella is commonly found in many populations, the team discovered the Lak phage living in the guts of people living in rural Bangladesh and the Hadza tribe in Tanzania who subsist mostly on vegetables and some seafood but eat very little meat, sugar and fat.

Tellingly, Lak were also found in the guts of baboons and a pig, demonstrating that phage —  which can carry human health-relevant genes — can move between humans and animals and perhaps carry disease.

Phage are known to carry genes that exacerbate many human illnesses. They can carry genes that encode botulism, cholera and diphtheria toxins, for example, making symptoms much worse for those infected with the bacteria.

“The movement of megaphage along with the movement of their host bacteria raises the possibility that disease also can move between animals and humans, and the capacity for this is much larger with megaphage.” And because megaphage, which most biologists do not consider to be “living,” are bigger than lifeforms like bacteria, they blur the distinction between what is alive and what isn’t.

“These huge entities fill the gap between what we think of as non-life and life, and in a sense, we have mostly missed them,” Professor Banfield added.

The megaphage were discovered while Professor Santini was sequencing gut bacteria from people in Bangladesh to explore the effects of arsenic-tainted water on intestinal flora.

By reassembling their entire genomes, Professor Banfield saw that all of them were 10 times bigger than the average phage encountered in other microbiomes at 550 kilobase pairs.

Using a method called CRISPR, the team found that Prevotella contained snippets of megaphage DNA, suggesting that Lak prey on Prevotella but they found no evidence that it integrates its genes into the genome of Prevotella.

In two Bangladeshis whose gut microbiomes were sampled, scientists found changing levels of phage and Prevotella over time, indicating a constant cycle where rising populations of phage drive down bacterial populations, followed by a drop in phage that allows Prevotella to rebound.

“We see a classic predator-prey interaction between Lak phage and Prevotella. It uses the bacteria to replicate itself before destroying the infected bacterial cell and its membrane to release the newly made megaphage into the environment,” explained Professor Santini.

“We don’t know what impact this has on the human host, or how widespread the phage is, but the next step is to isolate it and characterise it further to find out. We also aim to find out whether it is transmitted from parent to offspring, or between humans and animals.”

The team now plan to see how populations of phage and the bacteria they prey on in the gut change over time and with diet, and how that affects health.