The connection between bird diet and skull shape is surprisingly weak for most species according to a new study led by UCL and the Natural History Museum, rewriting our understanding of how ecosystems influence evolution. 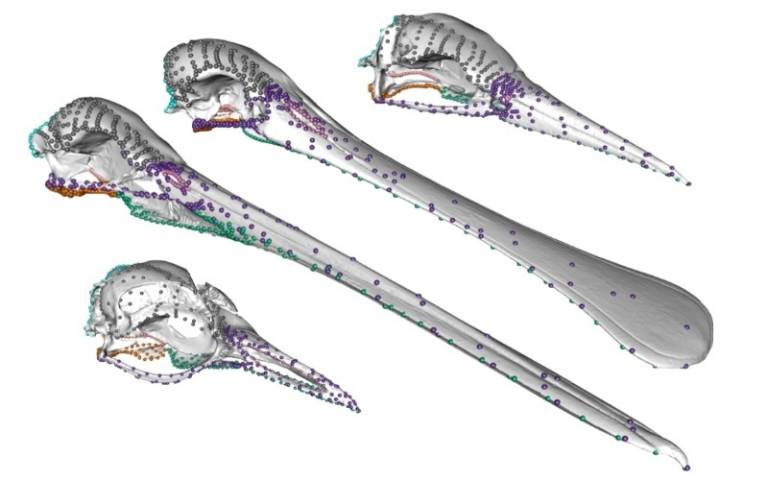 The connection between bird diet and skull shape is surprisingly weak for most species according to a new study led by UCL and the Natural History Museum, rewriting our understanding of how ecosystems influence evolution.

Charles Darwin’s 19th century observations of finches on the Galápagos Islands concluded that bird speciation was primarily influenced by ecosystem; the way a bird forages and eats forms its skull shape and drives evolutionary change.

However, a new study by UCL and NHM researchers testing a wider range of species than ever before has found that on a global scale, shared ancestry and behaviour are more important factors than diet.

The study, published in Royal Society journal Proceedings B, tested the skull shape of 352 bird species, representing 159 out of the 195 existing families, making it the largest study of its kind.

“If we apply Darwin’s conclusion for different kinds of birds who primarily eat fish, pelicans and penguins should have exactly the same head and beak shape, as they both use their beaks to eat fish. However, pelicans have a long beak and large throat pouch, while penguins’ beaks are comparatively small,” explained Dr Ryan Felice (UCL Biosciences), one of the authors of the study.

“Although they eat the same thing, pelicans and penguins acquire their prey in different ways, demonstrating the important role behaviour plays in cranial evolution.”

Penguins' mouths have a series of spines pointing down their throats, so that food stays in there when caught. Pelicans ingeniously catch fish in their pouch and then tip it back to drain out the water and swallow the fish immediately.

“It is evolutionary history, rather than diet, that has most significantly influenced cranial shape. If you are descended from a duck-like ancestor, you will probably have a duck bill, no matter what diet you have. However, shared diet establishes the parameters of skull evolution, determining the range of potential shapes which can evolve,” added Dr Felice.

The researchers also discovered that birds who eat grains – such as finches and quail – and those who survive on the nectar of flowers – like hummingbirds – exhibit the highest rate of cranial evolution. By contrast, terrestrial carnivores – hawks, falcons, owls and other birds who hunt and eat using their talons – exhibit a very slow rate of cranial change.

“This is where natural selection comes into play,” said Professor Anjali Goswami, a Research Leader at the Natural History Museum and a co-author on the study. “Birds that eat nectar or seeds are going to experience lots of competition for resources and must evolve in order to survive.”

“Our study focused on the skull, but we hypothesise that other parts of the body could be shaped by diet and ecology, such as wings, talons, and stomachs, as these are the parts of their bodies which are crucial for catching and digesting prey.”

The study used state-of-the-art equipment to build high resolution 3D digital models of the bird skulls. This allowed researchers to plot many more points on the skull than previously possible, allowing them to make robust and accurate measurements.

“Our next step is to expand this analysis to other groups of animals, like mammals, reptiles, and dinosaurs,” said Dr. Felice. “Our goal is to understand all of the different factors that have shaped skull evolution through time.”