Two 6kg bells were cast at B-made (The Bartlett Manufacturing & Design Exchange) in support of a campaign to preserve a working foundry and educational centre on the site of the 500-year-old Whitechapel Bell Foundry. 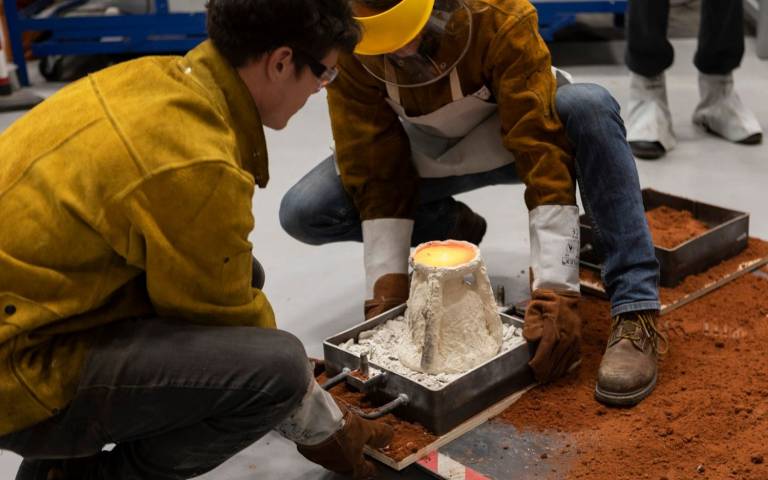 The Whitechapel Bell Foundry, located halfway between UCL’s Bloomsbury campus and UCL at Here East, Hackney Wick, was the oldest manufacturing company in Britain before it closed in 2017.

The foundry’s new owners are seeking to convert it into a hotel, but the Bartlett is supporting another proposal – by the UK Historic Building Preservation Trust (UKHBPT) and the Factum Foundation – to revive the site as a working foundry, combining traditional craftsmanship with new technology and establishing an apprenticeship scheme.

Tower Hamlets Council has given planning permission for the hotel, but last month Robert Jenrick, the Secretary of State for Housing, issued a holding directive temporarily halting the plan.

Peter Scully, Technical Director at B-made, said: “We wanted to do something here at B-made to celebrate the expertise at Whitechapel Bell Foundry that developed over generations and that is in danger of being lost.”

Mr Scully and Melis van den Berg, Teaching Fellow at the Bartlett School of Architecture, poured melted bronze, heated to 1,200 degrees centigrade, into a hot ceramic shell, and then chipped at the ceramic to reveal the newly formed bell inside. Electric furnaces were used to heat the shell and bronze.

The ceramic shell was built up in layers around a wax model of the bell.

In attendance at the casting were Sufia Alam, a community leader from the East London Mosque, and Stephen Clarke, a trustee of UKHBPT.

B-made operates workshops across The Bartlett's two sites – 22 Gordon Street in Bloomsbury and UCL at Here East. Students are taught construction design using a range of technologies, from traditional woodworking to CNC milling machines and lathes to laser-cutting and robotics. The school's programmes include the 15-month Master's programmes Design for Manufacture and Design for Performance and Interaction.

Whitechapel Bell Foundry dates back to 1570. It is known for recasting Big Ben, which rings from the Elizabeth Tower of the Houses of Parliament, and for making the original Liberty Bell, a symbol of American independence.

The proposal by Factum Foundation and UKHBPT would aim to restart the foundry within a year, would develop an apprenticeship and training scheme for bell making and tuning, and would open up the foundry to tours for school groups and the wider public.

The ceramic shell pictured just after melted bronze has been poured into it. Credit: Rachel Ferriman