Student reviews – Lunch Hour Lecture: Why Can’t I Sing with Australians on the Telephone?

Since 1942, UCL has hosted Lunch Hour Lectures, where academics give a one-hour presentation of their research. These are free and open to everyone. 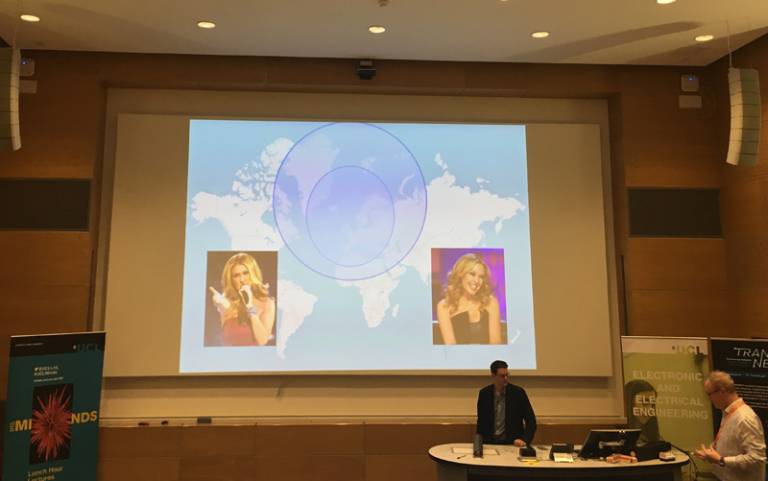 If you have family and friends on the other side of the world, you’re used to a conversation that goes a little like this:

As Dr Domaniç Lavery, of UCL’s Optical Networks Group explained, your Facetime image has been on a journey from, say, Melbourne to London. Your data has travelled over to America and across the Pacific Ocean. The longer your data has to travel, the greater the time lag in the audio.

The human brain can tolerate a lag in real-time audio of about 30ms. Any more than that, and we start to get confused, making it impossible to sing in time when we’re playing music. This delay means we cannot sing on the telephone with our Australian friends. For now, we can only sing as far as Turkey.

Dr Lavery has a plan. Almost all information passed through the Internet relies on transmitting beams of light through glass optical fibres. A faster alternative would be to let the light travel through the air rather than glass, which newer, hollow core fibres allow. He and his team showed that these hollow core fibres allow the beams of light to travel close to the speed of light in a vacuum. Through these improved fibres and an improved fibre network, the 30 ms zone could stretch further, over to Canada and the North of Africa.

A faster speed could make all the difference. To create the recent black hole picture, scientists shipped hard copies of data to a supercomputer. Sending the files over the Internet would have taken days.

But we are reaching peak WiFi. Even with technical improvements, data will never be able to travel faster than the speed of light, so audio travelling to Australia will always take at least 85ms. We may never be able to sing with Kylie Minogue, but we might one day sing with Celine Dion. It isn’t quite ‘near, far, wherever you are’.