A research team involving UCL has developed a test that may be able to detect ovarian cancer up to two years earlier than current approaches. 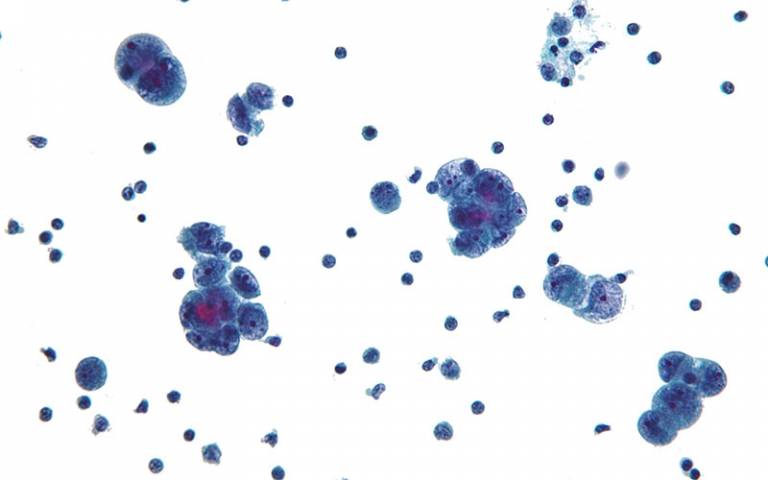 The researchers discovered that the presence of four proteins together, known as a biomarker panel, indicates the likelihood of Epithelial Ovarian Cancer (EOC), a type of ovarian cancer. Using these biomarkers the researchers then developed a screening test that initial studies suggest may be able to detect ovarian cancer up to two years before current detection tests.

The study, published in the British Journal of Cancer, involved the analysis of blood samples from 80 people across a seven-year period.

Dr Bobby Graham from the School of Biological Sciences at Queen’s University Belfast and lead author of the study explains: “Firstly, we discovered that the presence of the biomarker panel will enable us to detect EOC. We then developed a screening test to detect this biomarker panel, making this a relatively simple diagnostic test.

“The algorithm designed will screen the blood sample and flag any abnormal levels of the proteins associated with the cancer. The screening test identifies ovarian cancer up to two years before the current tests allow.”

Among women in the UK, ovarian cancer is the sixth most common cancer. In 2016, 4,227 deaths were reported as a result of EOC.

If diagnosed at stage one of EOC, there is a 90% chance of five-year survival compared to 22% if diagnosed at a stage three or four.

Dr Graham added: “The results of this study are encouraging, however, we now want to focus on testing it in a wider sample set so that we can use the data to advocate for an ovarian cancer screening programme.”

Co-author Professor Usha Menon (MRC Clinical Trials Unit at UCL) is one of the lead researchers on a 20-year study to help the NHS decide on whether a screening programme would be effective.

Dr Rachel Shaw, Research Information Manager at Cancer Research UK, said: “Around half of ovarian cancer cases are picked up at a late stage, when treatment is less likely to be successful. So developing simple tests like these that could help detect the disease sooner is essential.

The project was jointly funded by the Eve Appeal charity and Cancer Research UK.