Fine artist Chloe Manasseh has drawn on her late grandfather’s childhood memories of Eden Hall in Singapore, and the conversations they used to have, to complete a unique commission and fill the historic property with dozens of botanically inspired artworks. 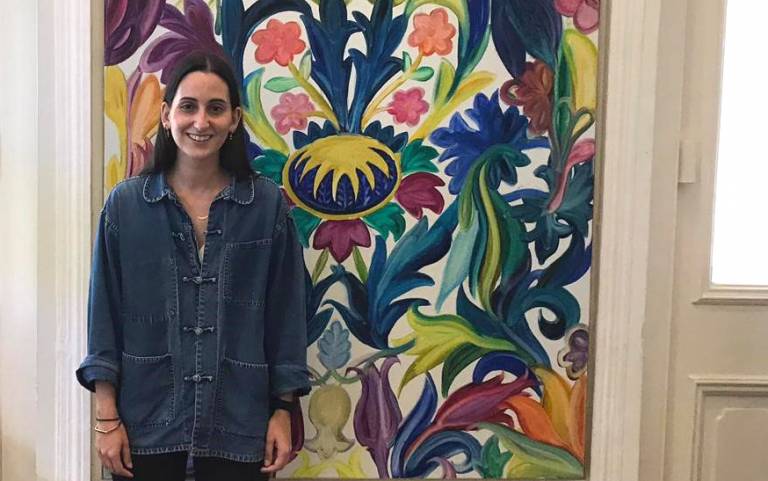 The distinctive grey and white house, now the official residence to the British High Commissioner, was built in 1904 for Chloe’s great uncle Ezekiel Manasseh, a rice merchant, and her grandfather Leonard Manasseh OBE, a world-renowned architect, was born in the colonial bungalow in 1916. The house was sold by the family to the British Government in 1955.

Now decades later Chloe, a masters graduate of the Slade School of Fine Art, University College London, has combined the images of Eden Hall she dreamt of as a child, with the actual property after being invited by Scott Wightman, the British High Commissioner to Singapore, and his wife Anne, to launch Art @ EdenHall and be its first Artist-in-Residence.

“My grandfather would often talk about his memories of Eden Hall and describe how beautiful it was: I would imagine this far-away home with its green gardens, bright flowers and beautiful birds,” Chloe said.

“But Leonard moved to Britain as a child, and although I knew our family had a connection to Eden Hall and Singapore, it was not a place I ever thought I would have the chance to visit or get to know.”

Last year the British High Commission in Singapore launched Art @ EdenHall, giving local artists the opportunity to exhibit work, and Chloe, who now lives in Singapore, was asked to be its inaugural artist.

For her solo show, ‘The Fruitfulness of Forgetting’, Chloe has created more than 30 paintings, along with pillows, rugs and painted pots. All are brightly coloured, and visibly inspired by the tropical paradise of Singapore, with expansive flower tendrils and birds of paradise.

Chloe (aged 28) said: “Eden Hall is a truly beautiful property. I have drawn inspiration from the many intricate patterns found within Eden Hall, alongside with the beautiful botanicals of Singapore and the wilds of my imagination.

“I also wanted the artwork to have a sense of humour, which is certainly something I inherited from my grandfather.”

All the artwork was created specifically for the exhibition and designed to fill a particular wall, space or room.

Chloe added: “My work reflects on how we inhabit space through visual identity. I am interested in the imprecision of memory and the process by which imagination can intrude on physical space, influencing how people establish a connection to it."

Since opening the show, Chloe, working with the British Council, has run an art workshop at Eden Hall for not-for-profit organisation Very Special Arts Singapore, which provides access and opportunities for people with disabilities through the arts.

Lori Houlihan, UCL Vice-Provost (Advancement), said: “It is always fantastic to see any UCL graduate excel in their chosen field and we are delighted that Chloe has gone on to become a successful independent artist, who is exhibiting her work around the world.

“Chloe has produced a beautiful collection of art for her commission at Eden Hall, which is clearly inspired by the property, its beautiful surroundings and is the perfect tribute to her family’s historical connection.

“With Chloe’s talent and creativity I look forward to seeing many more of her exhibitions in the future and will keep in touch via UCL’s thriving international network of alumni.”

The Fruitfulness of Forgetting is showing at Eden Hall, The British High Commission in Singapore, until the end of May. Registration is required by emailing happiness@artporters.com.