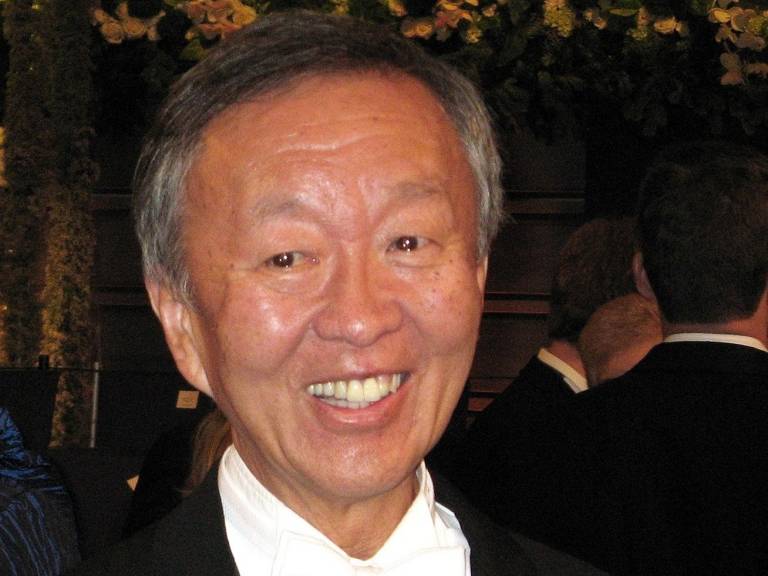 Sir Charles, known as the 'Father of Fibre Optics', completed his PhD in electrical engineering at UCL in 1965, under the supervision of Professor Harold Barlow. His thesis investigated 'Waveguides for millimetric and submillimetric electromagnetic waves'.

He went on to pursue a career in both industry and academia, including founding the Department of Electronics in the Chinese University of Hong Kong, where he later became Vice-Chancellor.

Sir Charles was awarded the Nobel Laureate for Physics in 2009, in recognition of his ground-breaking achievements concerning the transmission of light in fibres for optical communication. He had previously been awarded the Alexander Graham Bell Medal in 1985 and the Faraday Medal in 1989.

In 2010 Sir Charles was knighted in the Queen's birthday honours and was also awarded an Honorary Doctorate for Science by UCL.

In 2004, Sir Charles was diagnosed with Alzheimer's disease and, with his wife Lady Gwen Kao, went onto establish the Charles K Kao Foundation for Alzheimer's Disease in 2010, helping to raise awareness of the condition and support patients and their carers. In 2016 Sir Charles and Lady Gwen helped UCL launch their It's All Academic Campaign in Asia, which celebrated UCL's success with alumni and raise the profile of UCL's internationally leading dementia research.

UCL President & Provost, Professor Michael Arthur, said: "Sir Charles Kao was a giant of science, a great man and his place in history as the father of modern communications is assured; few people are able to make such an impression on the world as he has done.

"He was also a true friend to UCL and in November 2016 we were delighted and honoured that Sir Charles and his wife Gwen could join us in Hong Kong at the launch of our It's All Academic Campaign, which has dementia research as a major priority.

"Despite Sir Charles' illness it was inspiring to see his character shine through, as his wife Gwen gave an outstanding talk, powerfully illustrating the importance of dementia research. I am sure his Foundation, which is challenging taboos around this illness, will continue to grow from strength to strength.

"We will always be very proud of our connection to Sir Charles and our thoughts are with his family at this time."

UCL Dean of Engineering, Professor Nigel Titchener-Hooker, said: "Sir Charles leaves a legacy both in terms of his sheer brilliance as an engineer but also for his empathy in recognising the huge and largely unmet needs in the early diagnosis and treatment of dementia.

"His contributions mark him out as a truly outstanding individual who touched many lives and through whose generosity this will continue. He will be very sadly missed by those who had the good fortune to meet and to work with him."

"His PhD research in the department in the 1960s led on to his pioneering work on low-loss optical fibres, a technology which now underpins our entire modern day communication infrastructure.

"He will be greatly missed, but he will remain an inspiration for future generations of engineers to continue in his footsteps, innovating technologies that make the world a better place."

"It was a real privilege to meet him and Lady Gwen and to see how, in the face of the adversity of Alzheimer's disease, they have contributed so much to improve the support of people with dementia and their families.

"He leaves behind him a legacy that ranges well beyond his tremendous scientific achievements and which will help generations to come."