Listen to Her! Egypt's women fight for their rights

Egyptian women have been at the forefront of Egypt's political and economic struggles with nearly 3 million protesting against sexual harassment in 2013, yet their fight against social stigmas at home and abroad remains largely unnoticed within Western circles. 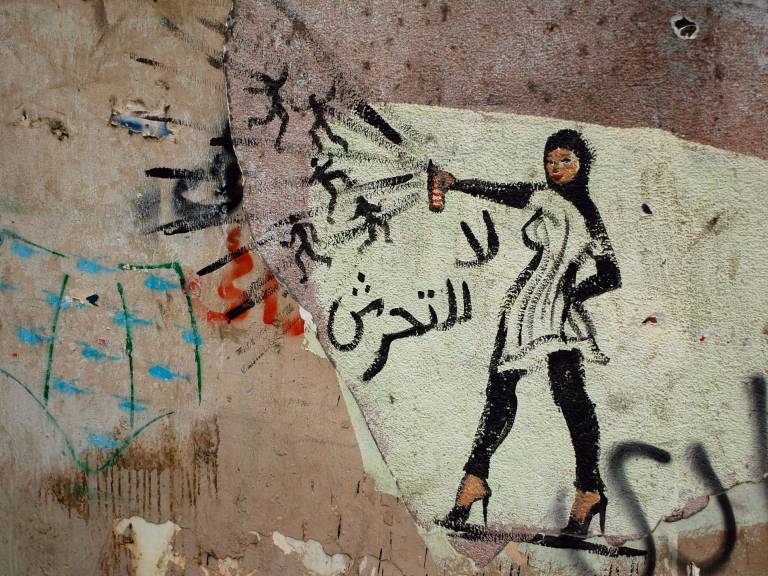 A new photo-story exhibition at UCL Petrie Museum, London, aims to highlight Egyptian women's fight to defy the status-quo by focusing on the not-so-ordinary activism of ordinary women in Egypt.

The exhibition titled 'Listen to Her!' runs until 22 December 2018 and is part of a dynamic programme of events being developed by the UCL Culture team.

Listen to Her! includes six personal and collective stories of ordinary Egyptian women. Among those women are a shoe-shiner, who disguised herself as a man for more than 40 years, in order to bring up her child as a single parent, a factory worker who started her own revolution in 2006 by calling for equal pay between men and women, and an early 20th century singer who protested the British occupation of Egypt through her symbolic songs.

Commenting on the exhibition, Guest Curator and Egyptian Egyptologist Heba Abd el Gawad, said: "This exhibition seeks to challenge the stereotypes about Middle Eastern and North African women, by making the burdens women in Egypt carry more visible and showing the many fights women have been leading to enhance their conditions.

"Global feminist movements like #MeToo and #InternationalWomenDay narrowly focus on celebrity culture and well-known high achieving women, predominately from the West. This exhibition puts the spotlight on intimate personal stories of activism that amplify the voices of ordinary women."

The exhibition encompasses a variety of different approaches. There is graffiti by female and male streets artists challenging society's stigma on women. Some of which has been erased, but which now exist somewhat permanently on social platforms.

There are also photographs by citizens who documented the 2011 revolution, and videos showing street dance performances on sexual harassment by Mahatat as well an emotive storytelling performance by Bussy, both Egyptian youth art movements emerging after the revolution.

There are also artworks by Deena Mohammed, the visual artist behind Qahera the Superhero, a web comic about a female Hijab superhero that defies Western stereotypes on women. Her female visibly Muslim superhero combats misogyny and islamophobia amongst other things.

Abd el Gawad comments: "Sexual harassment remains a huge issue in Egypt and all over the world despite new laws criminalising it. This is something we wanted to document through the exhibition. One of the artworks by Mira Shihadeh, a female street artist in Cairo, speaks to the trauma of women that have experienced the circle of hell - a form of mass sexual assault that female protestors have been subjected. As well as a series of graffiti showing different women spraying away their harassers."

"Applying Western frameworks of feminism in Egypt is problematic. While the struggle for equality is universal the local context is key. These issues can only be resolved with local solutions put forward by ordinary women."

The UCL Petrie Museum, where the exhibition will be held, is home to over 80,000 objects and ranks among some of the world's leading collections of Egyptian material. It provides an interesting environment where the legacies of the collection are juxtaposed with the contemporary issues facing Egypt.

Abd el Gawad has approached nine Egyptian females to reinterpret and relabel ten objects in the Petrie collection to highlight how museums can only be decolonised by involving those who have been colonised, in the case of the Petrie, the Egyptians, in interpretations of the ancient past.

Dr Anna Garnett, Curator of the UCL Petrie Museum, part of UCL Culture, explains why it was important to hold a contemporary exhibition in a museum of ancient Egyptian history:

"The Petrie Museum has a long tradition of working with our Egyptian and Sudanese colleagues to re-interpret the collection, and we are proud to work with Egyptian Egyptologist Heba Abd el-Gawad to showcase the little-known stories of real 'ordinary' Egyptian women in this exhibition."

Helen Pike, Public Programme Manager at UCL Culture, said: "We believe that it is important to challenge the way both research at UCL and the collections can be organised to engage audiences in more involved and democratic ways."

Abd el Gawad concludes: "I hope visitors to this exhibition will listen and see Egyptian and perhaps Middle Eastern women beyond their external attire. Abandon labelling them and better understand their struggles and their distinctive means of fighting stigma."