A simple blood test can detect the earliest changes caused by Huntington's disease, even before scans can pick up any signs in the brain, a new UCL-led study has found. 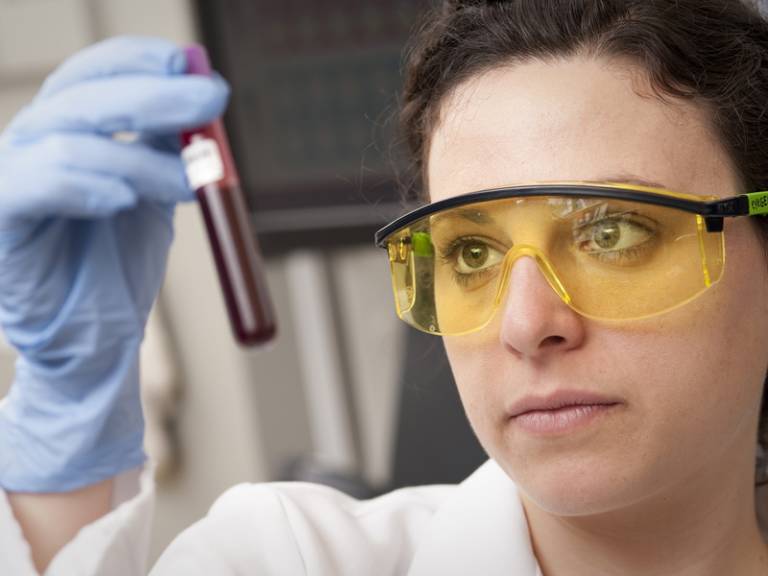 The study, published today in Science Translational Medicine, builds on recent evidence by the same research team, which found that a novel blood test can predict the onset and track the progression of the disease in people who carry the gene responsible for the incurable and fatal brain disorder.

In conducting this latest study, the team developed a tool kit to guide measurement of two early biomarkers of Huntington's disease found in blood and brain fluid, for use in clinical trials that seek to find the first disease-altering treatment for Huntington's.

"Many people who develop Huntington's report subtle signs such as with mood or coordination, in what's called the prodromal stage before any changes can be detected by brain scans. We've found that blood testing could help identify groups of people with very early neurodegeneration to help us run clinical trials of drugs to prevent symptoms," said lead author Dr Ed Wild of the UCL Huntington's Disease Centre, UCL Institute of Neurology.

"We were surprised to find the blood tests could pick up signs even before any evidence of neurodegeneration could be seen in brain scans."

The researchers caution that the blood test is not yet helpful for individual patients.

"More research is needed to clarify the clinical potential of this test. We hope it can help to develop the first drugs to slow Huntington's, and if they become available, then hopefully this test could help guide decisions on when to begin treatment," said first author Lauren Byrne (UCL Institute of Neurology).

Huntington's disease is caused by a single known genetic mutation, and each child of a mutation carrier has a 50% chance of inheriting the disease. While most people with the mutation start to show symptoms between 30 to 50 years of age, the onset of the disease can happen at any age.

The study involved 40 people with Huntington's disease who were at different stages of the disease, 20 people who carried the genetic mutation but had not yet been diagnosed with Huntington's, and 20 healthy control subjects, recruited through the National Hospital for Neurology and Neurosurgery.

The researchers took samples of blood plasma and cerebrospinal (brain) fluid, and tested them for both neurofilament light (NfL) protein, which is often a product of nerve cell damage, and for concentration of the mutant huntingtin (mHTT) protein that causes the disease. They then compared these results to clinical measures such as brain area volumes from MRI scans, and a few motor and cognitive tests.

They found that measures of NfL in blood were most strongly associated with all clinical measures.

The research team used the data to model what stage of the disease or of pre-Huntington's each person was in. From their modelling, supported by a comparison with a much larger cohort of patients, they could determine that the first identifiable changes are the quantity of the mutant gene in brain fluid, and of NfL in blood and brain fluid.

The researchers say their findings could be vital for clinical trials such as an upcoming trial to determine whether the drug RG6042 (formerly IONIS-HTTRx) can slow the progression of the disease.

"We are living in a time of incredible advancement in the field of neurodegeneration, and research in Huntington's disease is paving the way towards interventions that can change people's lives. Developing tools to track biological and clinical changes, and identify candidates to participate in clinical trials, is vital for the success of such trials," said co-author Dr Filipe Brogueira Rodrigues (UCL Institute of Neurology).

The study was conducted by researchers at UCL Institute of Neurology, UCL Centre for Medical Image Computing and the National Hospital for Neurology and Neurosurgery and funded by the Medical Research Council UK (MRC), the CHDI Foundation, Wellcome, Engineering and Physical Sciences Research Council (EPSRC) and Hoffman La Roche, with support from the National Institute for Health Research University College London Hospitals Biomedical Research Centre, the UK Dementia Research Institute, and the Horizon 2020 Framework Programme.

Huntington's disease is a fatal genetic neurological disease. It usually develops in adulthood and causes abnormal involuntary movements, psychiatric symptoms and dementia. Approximately 10,000 people in the UK have HD with around 25,000 at risk. It is incurable, and no effective treatments exist to slow it down. Patients usually die within 20 years of the start of symptoms.