International scientists are one step closer to answering the most fundamental question of our existence, 'why are we here?', as part of a global collaboration involving UCL researchers. 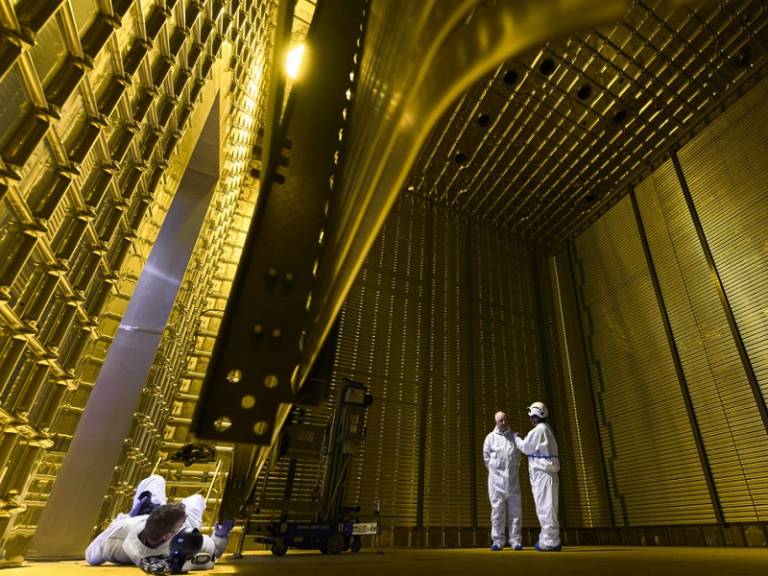 The Deep Underground Neutrino Experiment (DUNE) is led by scientists at CERN, Switzerland and Fermilab, USA, and is dedicated to unlocking the mysteries of neutrinos, the most abundant and most mysterious matter particles in the universe.

DUNE's liquid-argon neutrino detector - the world's largest - has just recorded its first particle tracks, signalling the start of a new chapter in DUNE's analysis of neutrinos.

Scientists on the DUNE collaboration think that neutrinos may help answer one of the most pressing questions in physics of why we live in a universe dominated by matter. In other words, why are we all here?

The ProtoDUNE detector is the size of a three storey house and the shape of a gigantic cube. It was built at CERN's European Laboratory for Particle Physics as the first of two prototypes for what will be a much larger detector for the DUNE project.

Professor Ryan Nichol (UCL Physics & Astronomy) works in the field of experimental neutrino physics and has been working at CERN on the DUNE collaboration.

He said: "This is the first step on the road to having the gigantic DUNE detectors. They will let us test how the universe works with unprecedented precision using a beam of particles that passes through over 1000km of earth.

"They might also shed light on how supernova and other exotic astrophysical processes work."

When neutrinos enter the detectors and smash into argon nuclei, they produce charged particles which leave ionisation traces in the liquid. These can then be seen by sophisticated tracking systems that create three-dimensional pictures of otherwise invisible subatomic processes.

The technology behind the first ProtoDUNE detector is the same that will be used for the DUNE detector modules when they are built in the USA, a mile underground at the Sanford Underground Research Facility in South Dakota.

Dr Linda Cremonesi (UCL Physics & Astronomy) said: "These first tracks are hugely significant as they represent the first steps towards the future DUNE detectors that will be 20 times bigger and will provide unprecedented information about the nature of neutrino oscillations."

Sebastian Jones, (UCL PhD candidate, Physics & Astronomy) said: "It's a very exciting step towards DUNE which has huge implications on how we understand the universe and our very existence."

Scientists will look at neutrinos' antimatter counterparts as well, looking for differences in behaviour between neutrinos and antineutrinos, which could lead to clues as to why the visible universe is dominated by matter.

DUNE will also watch for neutrinos produced when a star explodes, which could reveal the formation of neutron stars and black holes, and will investigate whether protons live forever or eventually decay, bringing scientists closer to fulfilling Einstein's dream of a grand unified theory.