A Brexit referendum is possible, but contingency planning must start now

A referendum on Brexit is clearly possible, but the details matter. Various processes must be put in place to ensure the referendum is legitimate, according to a new report by the UCL Constitution Unit. 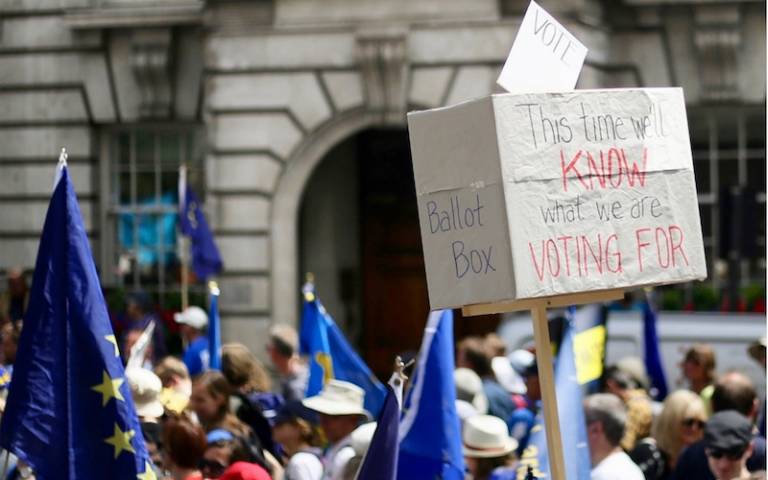 The report titled 'The Mechanics of a Further Referendum on Brexit' highlights the constitutional and legal questions that must be considered, including: the timeline, how a referendum could be triggered, the format of the question, and what rules should govern its operation. Key conclusions include:

Proponents of a second referendum argue that, with parliament so divided on the UK's future, the public should be given the opportunity to decide whether or not to accept the deal the government has negotiated once the details are known. The Constitution Unit has no position on Brexit or on whether a further referendum should be held, but seeks to inform debate about the practicalities.

Co-author Dr Alan Renwick, Deputy Director of the Constitution Unit (UCL Political Science), said: "The principle of a further referendum on Brexit is likely to remain controversial, so it is of utmost importance that the process should command the maximum legitimacy. If the result is to be accepted by those on all sides, every effort should be made to ensure the referendum campaign is fair, the poll is properly conducted, the options put to the referendum are clear, and the question allows voters to express their preferences unambiguously."

Co-author Professor Meg Russell, Director of the Constitution Unit (UCL Political Science), said: "In the British system anything is possible given the political will. The current level of interest in a further referendum on Brexit makes it vital that serious consideration is given to all possible scenarios, including which would work best and which would be most problematic. As events remain unpredictable, and may unfold quickly, it is possible that politicians will need to take rapid decisions, and we hope that our report can guide sensible and responsible decision-making."

Commenting on the new UCL report Professor Anand Menon, Director of UK in a Changing Europe (the organisation with which the report is joint published), said: "As ever, the details matter. While it is of course completely legitimate to debate and indeed campaign for, a second referendum, it is important that we are aware of the practical legal and constitutional rules that would determine how this might come about. This report spells these rules out clearly and comprehensively."

How long would it take to hold a referendum?
In order for a referendum to be held in the UK various processes must be completed:

There are clear uncertainties in the timescales, many of which are greatly dependent on politics. If both the government and opposition were willing to throw their support behind calls for a referendum a swift legislative process is possible.

This process must, however, accommodate the Electoral Commission's testing. If that could be compressed into around eight weeks, the bill might be approved within 11 sitting weeks. Including the time to prepare for polling day and conduct the campaign, the total time to stage a vote might be 22 weeks.

However this doesn't account for any obstacles, such as disagreement in parliament over key issues such the referendum question, or difficulties of testing and preparing for an unfamiliar question format such as a multi-option referendum.
Is it feasible to extend Article 50?

All the indications are that the EU would be willing to agree an Article 50 extension to allow the UK to conduct a referendum before Brexit is concluded. The UK government would probably hold a parliamentary vote to authorise a request to extend Article 50.

Even if an extension was agreed, there are various obstacles including the European Parliament elections, which are scheduled to take place from 23-26 May 2019.

In the context of Brexit it has been assumed that the UK will not take part, but if Article 50 was extended the UK could be legally obliged to hold the elections. A short delay might be possible, but ideally time should be left for elections by the end of June in the event that the referendum resulted in a UK vote to remain in the EU.

How could a referendum be triggered?

In order for a referendum to be triggered there would need to be a majority in parliament in favour of holding such a poll. How likely this is to come about would depend on a number of factors - including the political circumstances, whether a deal is reached, the nature of that deal, and how public opinion develops regarding both a second referendum and the UK's relationship with the EU. There is a precedent for parliamentarians to impose a referendum as a condition for passing a government bill, in the 1979 devolution referendums.

There are five scenarios through which a referendum could be triggered either on the government's initiative or against its wishes. These are outlined below:

What should the referendum question be?

Three main options could be considered for inclusion in any further referendum on Brexit: leave the EU on the government negotiated terms, leave the EU without a deal, or remain in the EU. Some may wish to include a fourth option: 'reopen negotiations', but a referendum of this kind would be ill-advised as it could not settle the issue of the UK's relationship with the EU.

There are various question formats that could be considered including: single yes/no question, single two-option question, multi-option referendum or two-stage referendum. Considering the options there are three viable approaches:

Some options are ruled out:

Setting the rules for the referendum

Any referendum would need to be conducted within a framework of rules. The UK has some standing legislation set out in the Political Parties, Elections and Referendums Act, but this leaves out some key issues.

One is the franchise for a referendum. The 2016 EU referendum included all those eligible to vote in UK parliamentary elections, plus members of the House of Lords and Gibraltar residents eligible to vote in European Parliamentary elections. Some might argue that 16 and 17-year-olds and EU citizens should have the vote in a future referendum. But the 2016 EU referendum did not extend the right to vote to these groups. Doing so now might undermine the legitimacy of this vote. Hence the franchise for any further referendum should be the same as in 2016.

The recent Independent Commission on Referendums conducted a comprehensive review of UK referendum regulation and made various recommendations for improvement. Some of these should be applied, particularly in relation to the transparency of digital campaigning, and the quality of information available to voters.

Putting it all together

Returning to the five scenarios above, the report concludes the following regarding timetables and their implications:

The authors conclude that an Article 50 extension of 6-9 months is probably required to accommodate a referendum and its aftermath. To avoid major problems with the European Parliament elections MPs need to take responsibility for pressing the government on a referendum (not leave it to the Lords), and do so as early as possible in the process.