This week is Trans Awareness week and the transgender pride flag is flying again on the UCL portico in support of UCL's transgender and non-binary community. 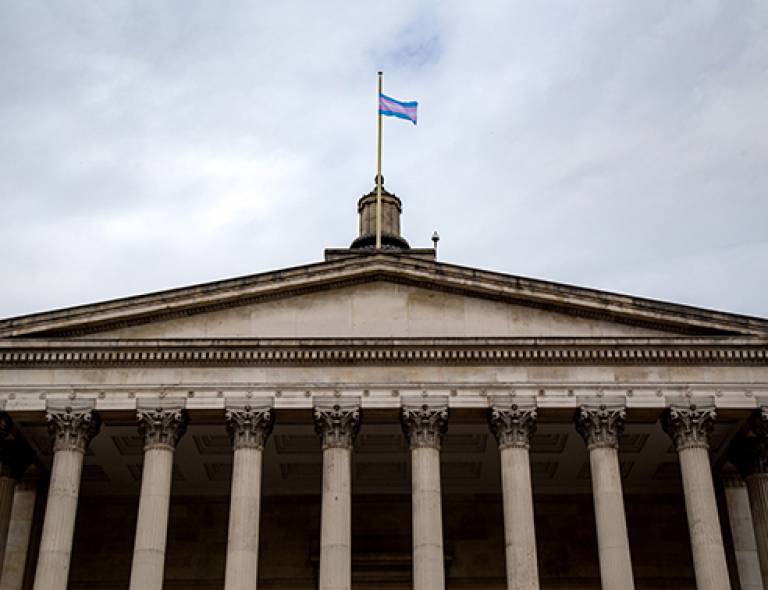 The flag will also be flown next Tuesday 20 November on Transgender Day of Remembrance. LEAG (UCL’s LGBTQ+ Equality Advisory Group) invites you to gather in the South Cloisters (Wilkins Building) to remember those who have been killed or experienced violence from transphobia and to demonstrate support for the community.

Over recent years, LEAG has worked hard to promote positive attitudes towards the LGBTQ+ community and to create an environment of inclusion and acceptance within UCL, where everybody is free to be themselves.

In 2016, LEAG launched the Friends of Out@UCL allies network. With over 100 members, including academics and professional services staff, this community of allies have agreed to visibly demonstrate their support for UCL’s LGBTQ+ staff and student community by displaying the ‘Friend of Out@UCL’ sticker on their door, laptop or wall.

They have delivered a number of Friends of Out@UCL ally training sessions, empowering UCL staff members to challenge behavior and language that is offensive to LGBTQ+ people and to raise awareness of transgender and non-binary identities.
In 2017, LEAG obtained statements from each of the Faculty Deans, Vice-Provosts, Directors of Professional Services, the Chair of UCL Council and UCL President and Provost, explicitly expressing their support for UCL’s LGBTQ+ community.

In collaboration with LEAG, the UCL Equality, Diversity and Inclusion (EDI) team developed a policy for supporting trans staff in the workplace that was heralded by Stonewall as an example of best practice. UCL also has comprehensive policy and guidance for trans students during their studies.

The group also work closely with UCL’s LGBTQ+ research network, qUCL, which is an incredible resource, engaging staff, students and the wider community with issues surrounding sexuality and gender on a regular basis.
If you would like to attend the event on 20th November or be involved, email out@ucl.ac.uk.