The 2018 Brain Prize, the world's most valuable prize for brain research at €1m, has been awarded to Professor John Hardy (UCL Institute of Neurology) and Professor Bart De Strooper (UK Dementia Research Institute at UCL) for their groundbreaking research on the genetic and molecular basis of Alzheimer's disease. 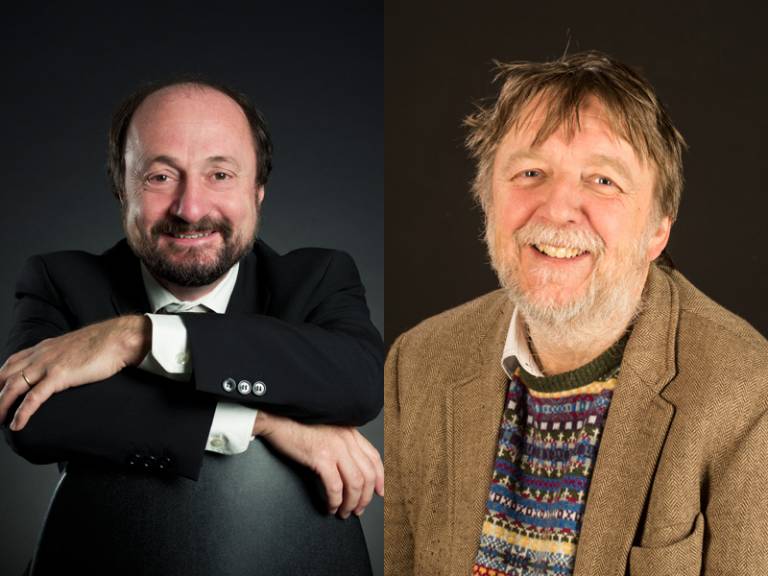 It is unprecedented that academics from the same institution have been awarded the coveted prize two years in a row. Last year saw Professor Peter Dayan (UCL Gatsby Computational Neuroscience Unit) and Professor Ray Dolan (UCL Institute of Neurology) receive the accolade for their work on how the brain recognises and processes reward.

"We're very proud that John and Bart have won such a prestigious award. Having UCL winners in two consecutive years is a testament to the impact of our neuroscience research, both within the Faculty of Brain Sciences and across the university," said Professor Alan Thompson, Dean of UCL Brain Sciences.

The Brain Prize, awarded annually by the Lundbeck Foundation in Denmark, recognises one or more international scientists who have distinguished themselves by an outstanding contribution to neuroscience.

Their pioneering research has paved the way for finding new ways to diagnose, treat and possibly even prevent it and other devastating diseases of the ageing brain.

Professor Bart De Strooper is the Director of the new UK Dementia Research Institute at UCL, and Professor of Molecular Medicine at KU Leuven and VIB, Belgium where he carried out the research that earned him his share of the Brain Prize.

He discovered that presenilin is a protein that 'cuts' other proteins into smaller pieces which is an important and complex process in normal cell signalling. Mutations in the presenilin genes cause Alzheimer's disease and Professor De Strooper found that these mutations lead to the production of abnormal amyloid which forms plaques in the brains of patients with Alzheimer's disease. Understanding how these mutations drive the dementia is important for identify new therapies.

"Treating amyloid very early on could provide protection against the symptoms of Alzheimer's in later life. But we have a 'catch 22 situation' in that we cannot do experiments in healthy people," said Professor De Strooper.

"I'm extremely happy with this award. It feels like a deep recognition of the work we have done, and I would like to stress it's the work of many people I've worked with in Belgium, the UK and elsewhere. I am very grateful to UCL and the DRI for the fantastic working environment that will help us tackle our next challenge of identifying dementia therapies."

Professor John Hardy is Chair of Molecular Biology of Neurological Disease at the UCL Institute of Neurology. His work on Alzheimer's disease, other dementias and Parkinson's disease is amongst the most highly cited in neuroscience, and in 2015 he was the first UK winner of the Breakthrough Prize in Life Sciences.

After finding mutations in the gene for a protein, amyloid, in a family with early onset disease he proposed a ground-breaking 'amyloid hypothesis' for Alzheimer's disease suggesting that disease was initiated by the build-up of this protein in the brain.

His discoveries of genetic mutations have had a dramatic impact on understanding not only Alzheimer's disease but more recently in other neurodegenerative diseases including Parkinson's disease, progressive supranuclear palsy and motor neuron disease.

"We're all thrilled and delighted about this huge honour. I would like to acknowledge the families who volunteer to take part in studies as they have been crucial to our research, so we are all indebted to research volunteers," said Professor Hardy.

"Collaborating with clinicians, geneticists and cell biologists is work in progress. Although we have not found a successful treatment yet, I believe we are on the way towards rational, mechanism-based treatments," he said.

The chairman of the Lundbeck Foundation Brain Prize selection committee, Professor Anders Bjorklund, said: "Alzheimer's disease is one of the most devastating diseases of our time. These four outstanding European scientists have been rewarded for their fundamental discoveries unravelling molecular and genetic causes of the disease that have provided a basis for the current attempts to diagnose, treat and possibly even prevent neurodegenerative brain diseases.