The human brain can take advantage of brain resources originally devoted to the hand to represent a prosthetic limb, a new UCL-led study concludes. 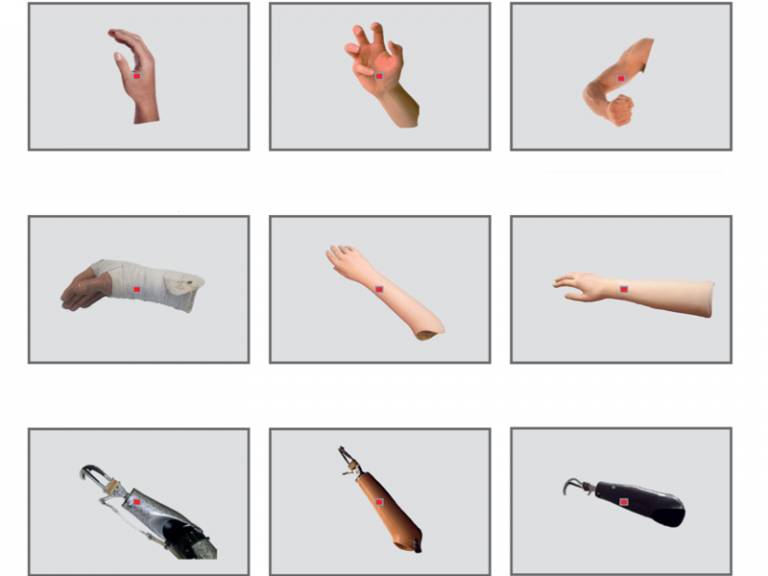 Among people with only one hand, the brain area that enables us to recognise hands can also recognise a prosthetic hand, particularly among those who use a prosthesis regularly, according to the new Brain paper.

The study provides the first account of how artificial limbs are represented in the brains of amputees.

"While the use of a prosthesis can be very beneficial to people with one hand, most people with one hand prefer not to use one regularly, so understanding how they can be more user-friendly could be very valuable," said the study's lead author, Dr Tamar Makin (UCL Institute of Cognitive Neuroscience).

"If we can convince a person's brain that the artificial limb is the person's real limb, we could make prostheses more comfortable and easier to use."

Within the visual cortex of the brain is an area that enables people to recognise hands. This area displayed a stronger response to images of prostheses among the one-handed participants, compared to the controls, particularly among those who used a prosthesis most frequently in their daily lives. This part of the brain also responded to images of prostheses that are functional but do not look like a hand, such as a hook prosthesis.

The researchers also investigated the connectivity between the visual hand-selective area and the area of the sensorimotor cortex which would be expected to control the missing hand.

They found there was better connectivity between these two brain areas in those people who used their prostheses regularly.

"Our findings suggest that the key determinant of whether the brain responds similarly to a prosthetic hand as it does to a real hand, is prosthetic use. As many of our study participants lost their hand in adulthood, we find that our brains can adapt at any age, which goes against common theories that brain plasticity depends on development early in life," said the study's first author, Fiona van den Heiligenberg (UCL Institute of Cognitive Neuroscience).

The researchers say their findings offer hope, as they have not found clear neural barriers to representing a prosthesis as a body part.

"Logically I know my prosthesis is not my missing hand - it's a tool, it's a new sensation and I accepted that. The more I use my prosthesis, the more I feel like it becomes a part of me," said Clare Norton, a study participant who has had one hand amputated.

"We think the ultimate barrier is simply how much you use the prosthesis," said Dr Makin.

"To me this is natural, having one hand is how it's always been. The prosthesis is part of me, I don't regard it as an addition - I consider it a hand," said another study participant, John Miller, who was born with only one hand and regularly uses his prosthesis.

The researchers say their findings could provide new insights to guide rehabilitation strategies as well as prosthesis design, and potentially guide other types of augmentation technology as well.