UCL students work with the BBC to produce short films

A group of five science journalism students all studying for a Science, Technology and Society MSc at UCL took part in the BBC Future collaboration. 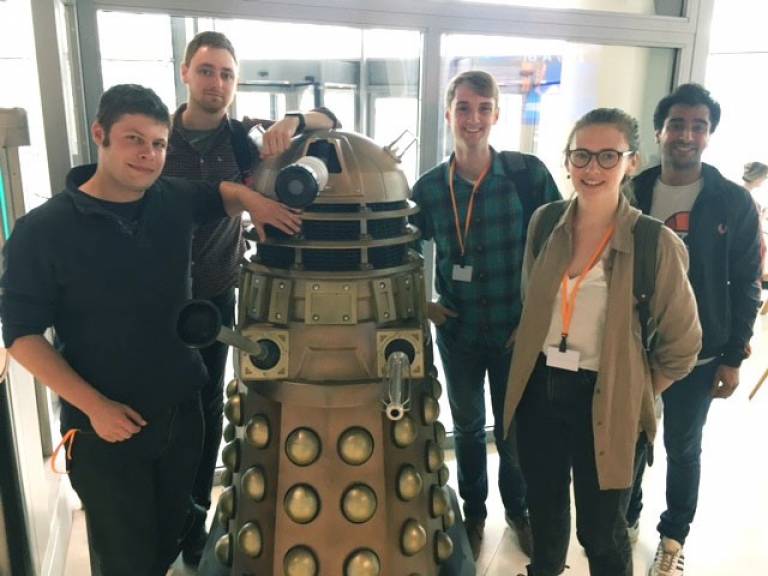 BBC Future is a project run by the BBC to provide more in-depth coverage of science, health and technology. It aims to provide expert analysis and features about the big ideas shaping the world, and the new insights challenging what we know about ourselves.

The BBC have been presenting this information in 'captioned videos', a format that is now widespread in the industry, due to its suitability for silent viewing on mobile devices, especially via social media platforms like Facebook.

From January this year, the BBC have been looking for a new batch of ideas for scripts that their video producers could make. After initially visiting UCL Science & Technology Studies to deliver a talk to postgraduate students, Richard Fisher (Head of Digital Features, BBC Global News) approached the department to see if the students would be interested in contributing to the BBC Future project.

The UCL Science & Technology students were invited to pitch short and engaging story ideas that could be conveyed with minimal text (less than 150 words or so, delivered in snappy sentences), that would inspire the video producers to find strong, compelling accompanying visuals.

The students were asked to produce a short paragraph summarising their idea(s), a proposed headline, and possible suggestions for visuals that could feasibly be sourced from a stock library.

The BBC encouraged the students to check their archive and research what has been published elsewhere before pitching their ideas. In total, the Science & Technology students were commissioned to produce 15 captioned video scripts for short 1 min 30 seconds - 2 min videos for the team at BBC Future.

Their videos centred on three themes: Mega Builds: a video series looking at giants of engineering from around the globe, Life: Connected: focusing on how digital culture and technologies pervade everything we do, Body of Evidence: unravelling medical myths and curious health conditions.

"On average, each of our videos amassed a viewership of 100,000 views! The success of the series led to us being invited to work at BBC Studios in White City. It was a real honour and working alongside Richard and Howard over the past few weeks; it has been an absolute pleasure for all of us" said Arabella Turek (UCL Science, Technology & Society MSc student).

Richard Fisher (Head of Digital Features, BBC Global News) said, "We were very pleased to receive the video pitches from the UCL Science & Technology Studies students. I enjoyed working with them and was really impressed by their curiosity!" Students with successful pitches were paid a small fee and offered a by-line credit on the BBC Futures website.

In light of the success of this experiment, BBC Future has agreed to offer the same opportunity to five new MSc students next year.

Dr Jean-Baptiste Gouyon, who teaches science journalism to MSc students and final year students at UCL Science & Technology Studies said: "This was a fantastic occasion for the students involved. It gave them the chance to apply what they were taught during the course and take it one step further by working with professionals and acquiring new skills. I am very grateful to Richard Fisher and Howard Timberlake for giving them this opportunity, and I am very proud of the students who met the challenge with gusto, clearly exceeding expectations."