A modified form of botulinum toxin gives long-lasting pain relief in mice without adverse effects and, in time, could replace opioid drugs as a safe and effective way of treating chronic pain, according to research by UCL, the University of Sheffield and the Hospital for Sick Children, Toronto. 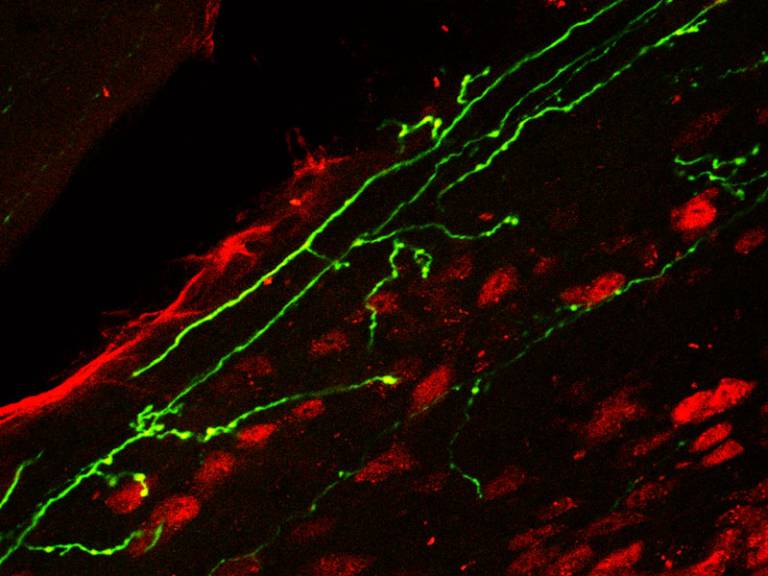 For the study, published today in Science Translational Medicine and funded by the Medical Research Council, scientists deconstructed the botulinum molecule and reassembled it with an opioid called dermorphin to make Derm-BOT - a compound which successfully targets and silences pain signals from neurons in the spinal cords of mice.

Key neurons in the spinal cord are targets for pain management as they directly 'sense' pain and send this information to the brain.

"It doesn't affect muscles like the botulinum toxin used to reduce wrinkles but it does block nerve pain for up to four months without affecting normal pain responses. It really could revolutionise how chronic pain is treated if we can translate it into clinic, removing the need for daily opioid intake."

Chronic pain of 'moderate to severe' intensity is widespread affecting 7.8 million people in the UK and 19% of adult Europeans. It is a serious social and medical problem which negatively impacts quality of life.

Opioids like morphine and fentanyl are considered to be the gold standard for pain relief but there is little evidence that their long-term use is effective in treating chronic pain. This is because the body builds up a tolerance to repeated drug use which over the long term.  Paradoxically opioids can also increase the body's sensitivity to pain.

In the UK, 5% of the population are on opioids with 80% reporting negative side effects.

Opioid medications can also activate brain reward regions, causing addiction. Over 2 million individuals in the US have 'opioid use disorder' with most starting with prescribed opioid painkillers and opioid overdose is now the second leading cause of death in the US.

Previous studies in rats and companion dogs show that precise injections of tiny amounts of toxic substances, such as 'substance P-saporin', into the spine kill neurons responsible for crippling, chronic pain. This approach relies on an analogue of ricin which is difficult to manufacture to clinical standards and clinicians are resistant to irreversibly kill nerve cells.

In contrast, Derm-BOT is safe to manufacture, is non-toxic and does not kill neurons.

"We needed to find the best pain targeting molecular parts to direct the botulinum silencing  'warhead' to the pain-controlling system in the spine. For this, we developed a molecular Lego system which allows us to link the botulinum 'warhead' to a navigation molecule, in this case, the strong opioid called dermorphin, allowing the creation of widely desired long-lasting pain killers without the side effects of opioids," said co-corresponding author Professor Bazbek Davletov from the Department of Biomedical Science at the University of Sheffield.

Dermorphin targets and binds to opioid receptors on the surface of neurons which allows the Derm-BOT compound to enter the cells where the botulinum 'warhead' then reversibly inhibits the release of neurotransmitter, silencing the cells essential for sending pain signals to the brain.

Over a five year period, 200 mice were used to simulate the early stages of human inflammatory and neuropathic pain and were treated with a single injection of either Derm-BOT, SP-BOT (a substance P-modified botulinum molecule) or morphine. The behaviour of the mice was monitored to track their pain-response and the locations and binding properties of the botulinum compounds were investigated.

"Both SP-BOT and Derm-BOT have a long-lasting effect in both inflammatory and neuropathic pain model, successfully silencing neurons without cell death. We were impressed to see that one tiny injection was enough to stop chronic pain caused by inflammation and nerve damage for at least a month.

"Furthermore, a single injection of Derm-BOT reduced mechanical hypersensitivity to the same extent as morphine. We hope to take our investigations forward with the aim of translating this into the clinic," concluded lead author, Dr Maria Maiarù (UCL Cell & Developmental Biology).