New dinosaur found in the wrong place, at the wrong time

A new dinosaur called Lingwulong shenqi or 'amazing dragon from Lingwu' has been discovered by an Anglo-Chinese team involving UCL. 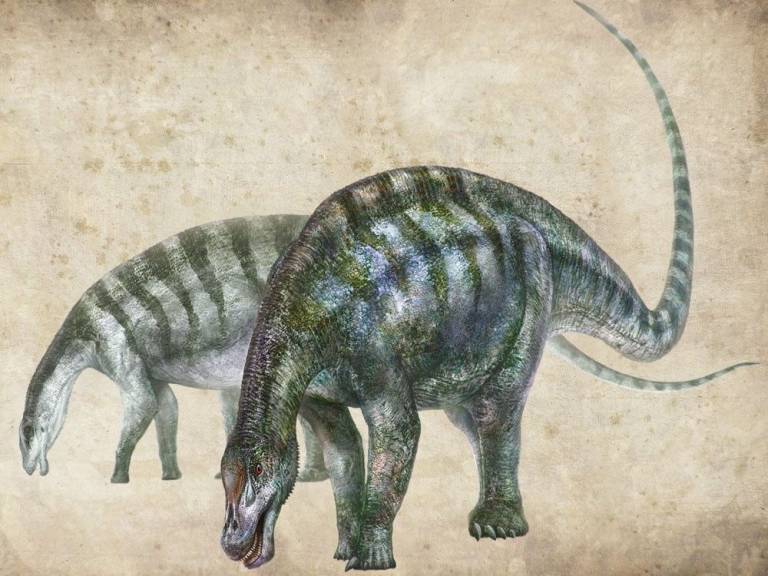 The announcement, published today in Nature Communications, reports the surprising discovery of the new dinosaur which roamed the Ningxia Autonomous Region, northwest China, approximately 174 million years ago. This is in a place they were never thought to roam and 15 million years earlier than this type of dinosaur was thought to exist.

Lingwulong is the earliest known example of a type of advanced sauropod dinosaur called a 'neosauropod' - one of the long-necked, gigantic herbivores that are the largest land animals known, including famous forms such as Brontosaurus and Diplodocus.

Sauropods originated around 200 million years ago, but they only started to truly dominate terrestrial ecosystems by developing gigantic body size (up to 70 metric tonnes) and numerous new adaptations for obtaining and processing plant food.

These giant neosauropod descendants were thought to originate around 160 million years ago, rapidly diversifying and spreading across the world during a time window perhaps as short as just 5 million years.

"We were surprised to find a close relative of Diplodocus in East Asia 174 million years ago. It's commonly thought that sauropods did not disperse there until 200 million years ago and many of their giant descendants, reached this region much later, if at all," explained study co-author Professor Paul Upchurch (UCL Earth Sciences).

"Our discovery of Lingwulong demonstrates that several different types of advanced sauropod must have existed at least 15 million years earlier and spread across the world while the supercontinent Pangaea was still a coherent landmass. This forces a complete re-evaluation of the origins and evolution of these animals."

The new evidence also reinforces the growing realisation that the Early Jurassic (200-175 million years ago), was a key time in dinosaur evolution, witnessing the origins and diversification of many groups that went on to dominate the later Jurassic and Cretaceous.

"Diplodocus-like neosauropods were thought to have never made it to East Asia because this region was cut-off from the rest of the world by Jurassic seaways, so that China evolved its own distinctive and separate dinosaur fauna. However, Lingwulong shows that these Diplodocus-like sauropods were present after all, and implies that the isolation of East Asia was less profound and short-lived than we realised," said lead author, Dr Xing Xu (Institute of Vertebrate Paleontology & Paleoanthropology, Chinese Academy of Sciences, Beijing, China).

For the study, palaeontologists analysed the fossilised skeletons of 7-10 individual dinosaurs that were found together in rocks in 2005 and have been dated at approximately 174 million years old. Funding secured in 2016 by National Geographic Research enabled the formation of this Anglo-Chinese project to study the specimens in detail.

The team conclude that finding such a dinosaur 'in the wrong place, at the wrong time', emphasises the gaps in our knowledge of the fossil record and suggests that there are many surprises still to come.