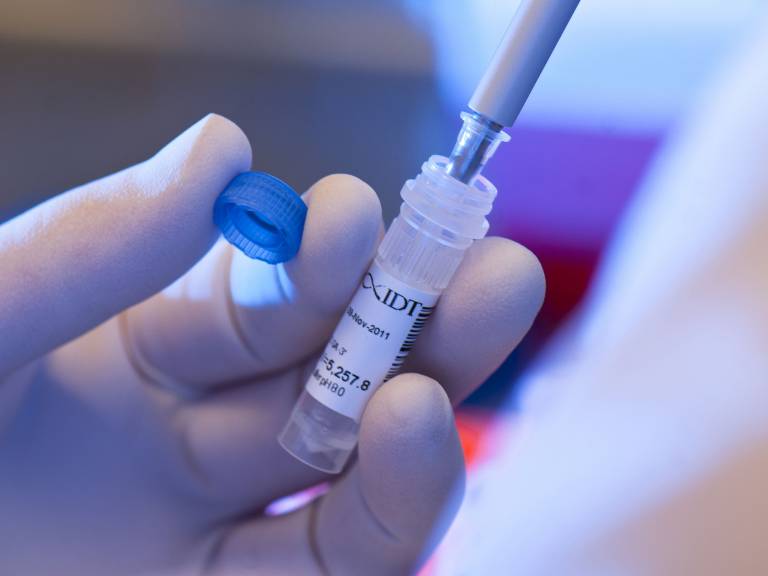 The study, published today in Nature Medicine, highlights the potential of fetal gene therapy to prevent and cure neonatal lethal neurodegenerative diseases in humans in utero.

Gaucher disease is an irreversible, inherited genetic metabolic disorder that results from not having enough glucocerebrosidase (GCase) - an enzyme that breaks down fatty chemicals called glucocerebrosides (GBA). Because the body cannot break down this chemical, the fat-laden Gaucher cells build up in the spleen, liver, bone marrow, and nervous system, causing bone disease, anaemia, fatigue, eye problems, seizures, and brain damage.

Mutations in the GBA gene, which encodes the GCase enzyme that is deficient in Gaucher disease, are also a risk factor for Parkinson's disease.

"Although the symptoms of some mild forms of Gaucher disease can be treated postnatally, more severe forms that cause early-onset, irreversible neurodegeneration are currently untreatable and are often fatal in infants. Being able to provide therapy at the earliest possible opportunity is vital in treating the brain which has a limited capacity to regenerate," explained senior author, Dr Ahad Rahim (UCL School of Pharmacy).

"We found that the mice who received an injection of adeno-associated virus (AAV) vector were more able to break down fatty chemicals and re-express the gene encoding an enzyme that is deficient in Gaucher disease," said Dr Simon Waddingdon (UCL Institute for Women's Health).

"The mice who received the injection in utero, lived for up to at least 18 weeks after birth compared to 15 days in untreated mice and had no signs of neurodegeneration and were fertile and fully mobile. Neonatal intervention also rescued mice but less effectively."

Given the promising results shown in mice, the team from Singapore performed the test in non-human primates (NHP) at the early stages of pregnancy. This is the gestation when a clinical diagnosis of genetic conditions can be made, and when the immune system is more responsive to gene therapy. The research involved the use of NHPs due to their similarity to humans in the development of the central nervous system, and other organs, allowing for an accurate model to be achieved in fetal gene transfer.

"Macaques and humans share a very similar neurological, immunological and physiological developmental time-line in the womb, making them accurate models for pre-clinical investigations before clinical trials can proceed. We have used a clinically relevant method to deliver the GBA gene using AAV vectors to the brain efficiently.

"This new approach will bring hope, not only for Gaucher disease, but also for other inborn errors of metabolism that can potentially be treated using fetal gene therapy," said Associate Professor Jerry Chan, Senior Consultant, Department of Reproductive Medicine, KK Women's and Children's Hospital.

The team, which also involved scientists from King's College London, Imperial College London, the University of Oxford and an international team of researchers, are now engaged with Apollo Therapeutics in developing gene therapy for Gaucher disease.

Dan Brown, Chairman of the Gauchers Association added, "The Association has been involved as part of this project from a very early stage providing the initial grant to which allowed them to begin their research and are delighted to hear of the promising results published today."