Breast screening based on women's risk level would reduce overdiagnosis

A targeted 'risk-based' breast screening programme could do 'more good than harm', reduce overdiagnosis, and be run at an affordable cost to the NHS, a UCL-led study found. 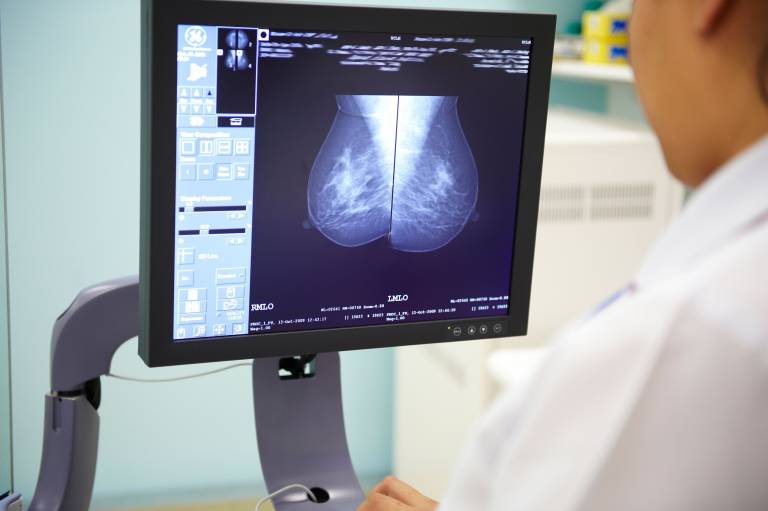 The economic evaluation and simulation modelling study concluded that a screening initiative, which did not include low risk women, would improve the quality of life gained following screening, reduce overdiagnosis* and save resources, while maintaining the benefits of screening.

Published in the peer reviewed journal JAMA oncology, the study was funded by Cancer Research UK and led by the UCL Department for Applied Health Research, with support from the University of Cambridge.

Lead author Dr Nora Pashayan (UCL Department of Applied Health Research) said:  "Breast screening has both benefits and harms: It can reduce death from breast cancer in some women while others may have unnecessary diagnosis and treatment of breast cancer.

"Offering screening according to women's risk level could improve the efficiency of the screening programme and reduce its harms."

In the UK the NHS Breast Screening Programme (NHSBSP) invites women aged 50-69, for a digital mammogram every three years. However, numerous studies have shown that the risk of developing breast cancers varies significantly among women, with genetic, lifestyle and reproductive factors increasing an individual's susceptibility.

The research simulated three hypothetical cohorts of women, aged 50 and free of cancer, followed up over 35 years.  Each cohort consisted of 364,500 women - the 2009 population of women aged 50 in England and Wales. The first group received no screening, the second received a mammography at age 50, and for every three years thereafter - simulating the NHSBSP - while for the third cohort, a risk estimation was carried out and only those with a risk score greater than the threshold (low) risk, were offered screening every three years from 50 until aged 69.

In the modelling study, researchers used a number of accepted parameters, including predicted rates of age-specific breast cancer, breast cancer-specific mortality in screened and unscreened populations and the overdiagnosis estimate developed by the UK Independent Panel on Breast Cancer Screening. To model cost effectiveness of age-based and risk-based approaches to screening, along with no screening, researchers used NHS costs for the screening programme and costs of breast cancer treatment.  The benefit to harm balance was measured as the ratio of over diagnoses to breast cancer deaths prevented. The researchers simulated 100 different risk-based screening scenarios.

"There are now more than 300 known variants within the human genome, which increase a women's risk to breast cancer, and with genotype analysis feasible from cheek swabs, it may be possible for more targeted screening which will both reduce the detriment caused by over diagnosis and increase the chances of early diagnosis for those at risk.

"However we recognise implementing an initiative of this nature raises challenges - not least defining those women deemed low risk and making any screening based on risk acceptable to the public, health professionals and regulators."

Professor Fiona Gilbert, a co-author of the study from the University of Cambridge, said: "We need to change the model of delivery of breast screening and recognise that women are individuals with different risks and lifestyles. They should be offered screening tailored to their own profile."

*Over diagnosis is the detection by screening of tumours that would not have been diagnosed in a woman's lifetime if she had not had screening.